The storm’s present movement is to the east-southeast at about 2.0 mph (4.0 kph). The minimum central pressure is now 1005 MB or 29.68 inches. There is still minimal movement and this is expected to last for another couple of days.

According to the National Hurricane Center update, swells caused by the storm are expected to increase around the coasts of North Carolina and the mid-Atlantic states through early next week. Meteorologists said the swells can result in life-threatening surf and rip current conditions. 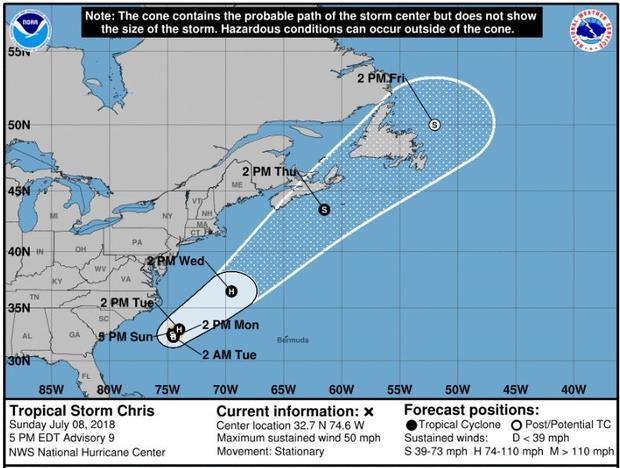 According to the Canadian Hurricane Center, at this time it appears this storm could approach Nova Scotia by Thursday, likely weakening slightly as it does so. They also note that at this time, there is still a bit of uncertainty in the forecast track and intensity.

And CTV News Canada is reporting that if the current forecast track remains as is, it is likely that regularly issued bulletins will begin on this system early Tuesday morning. 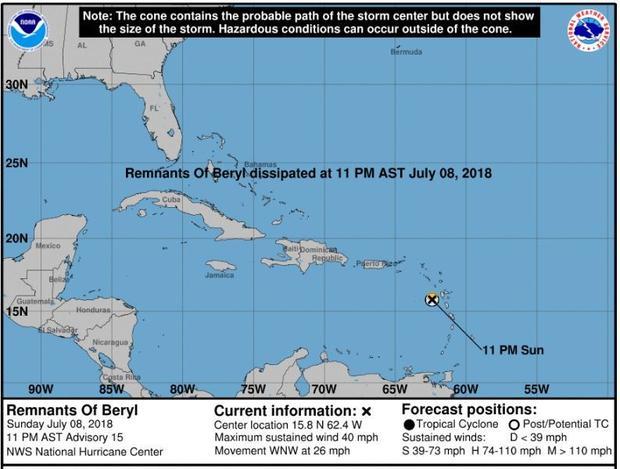 NHC update as of 11:00 p.m. July 8, 2018.
NHC
The NHC is advising Interests in the Leeward Islands, the Virgin Islands, Puerto Rico, the Dominican Republic, and Haiti to continue to monitor the progress of the remnants of Beryl.
Advertisement. Scroll to continue reading.

Beryl still has maximum sustained winds of near 40 mph (65 kph) with higher gusts. Wind associated with the remnants are expected to drop below gale-force later tonight or Monday morning.

It needs to be noted that environmental conditions are conducive to the tropical system reforming as it moves across the Bahamas and the western Atlantic over the next few days. So we are not completely out of the woods yet.