Google launched Google Photos in May 2015. The app provides a single place for users to store, organise and edit photos. It automatically builds albums, assigns tags to photos and creates short videos, taking the pain out of keeping large photo collections tidy. The service has proved to be a hit with users, attracting over 100 million people in just the first five months after its launch.
In comparison, Microsoft’s Photos app for Windows 10 is limited. It connects to OneDrive and includes basic editing and album tools but isn’t as versatile, feature-filled or reliable as Google Photos. Some features available online, such as automatic tags, aren’t even present in the Windows 10 app. If Microsoft wants to rival Google, it will have to do more. 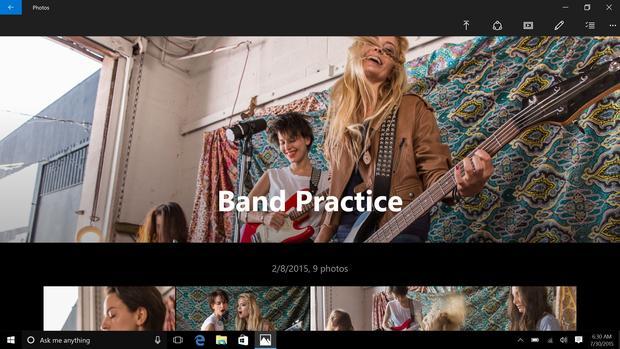 The Photos app in Windows 10
Microsoft

As ZDNet reports, Microsoft appears to be aware of this. The company has recently posted job listings aiming to recruit people to develop a new “digital memories” app that sounds a lot like Google Photos.
The app is being created by a Microsoft studio called Evoke. In the listings, Microsoft describes the studio’s role in the company as “creating a portfolio of experiences that will forever change the way people create, recall, relive and retell their digital memories.”
“We’re a consumer experience focused team, marrying easy to use and delightful UX with leading edge technologies under the covers,” reads one job listing. “You’ll help us shape the future of how we all interact with our personal photos and videos.”
The listings reference machine learning algorithms that will allow people to “transform” how they “tell their stories and preserve their memories through photos and videos.” The server software being built to run the service is designed to handle “billions” of items at one time with “100s of millions” of daily users. All things considered, this sounds a lot like a concerted effort to turn OneDrive Photos into a complete Google Photos rival.
Evoke is working with Microsoft Research and OneDrive to build the technology. Presumably, the former is providing guidance on the machine learning elements and the latter handing over the existing code for OneDrive’s automatic album and tag generation features.
Microsoft is staying quiet on the discovery for now. The job listings indicate the new service is still many months away from making a public appearance. It may not arrive until next year, by which time Google Photo’s extraordinary growth will have taken it to several hundred million users.
Having competition from an app available to the hundreds of millions of Windows 10 users will undoubtedly be a good thing though, giving consumers more choice where to store their photos and how they want to organise and categorise them.