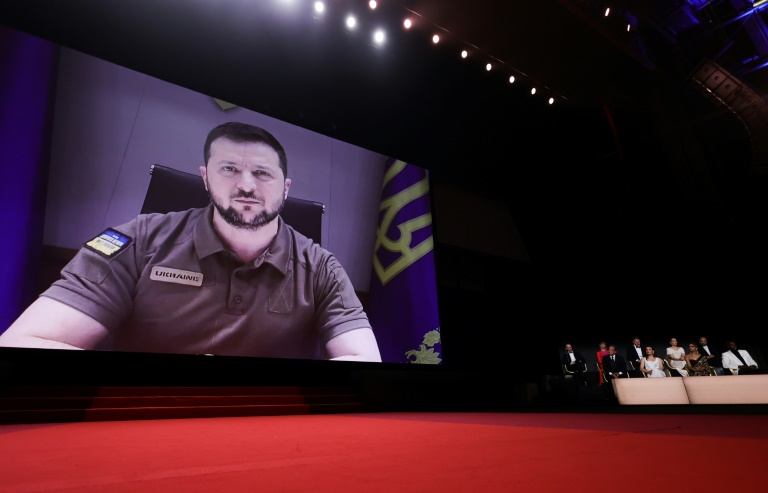 A parade of Oscar winners on Tuesday kicked off the 75th Cannes Film Festival, devoting special attention to the war in Ukraine as it returned to high-wattage form after the lifting of Covid rules.

Ukrainian President Volodymyr Zelensky addressed the gala opening ceremony as a surprise guest by video link from Kyiv, asking for the cinema world’s solidarity with his people in the face of the Russian invasion.

“In the end, hatred will disappear and dictators will die,” he told the rapt audience which gave him a standing ovation.

After two years in which the pandemic put a dampener on the world’s top cinema showcase, the masks are off, health passes are no longer needed and stars from around the globe are ready to party.

Forest Whitaker, the 60-year-old who scooped an Academy Award for “The Last King of Scotland” and starred in cult films such as “Ghost Dog” and recent TV hit “Godfather of Harlem”, picked up an honorary Palme d’Or at the opening ceremony on the Cote d’Azur.

He is a regular at the festival, having won its acting award back in 1988 for his role as jazz legend Charlie Parker in Clint Eastwood’s “Bird”.

“When I came to Cannes, I was acknowledged as an artist for the first time internationally,” he told reporters.

“It really changed my life and the trajectory of my career in some ways, because it allowed me to be seen as an artist and not just a player.”

Punters thronged the Croisette seaside promenade ahead of the first red-carpet premiere, “Final Cut”, a comedy love letter to filmmaking and Z-list zombie movies from the team behind the Oscar-winning “The Artist”.

Its director Michel Hazanavicius told AFP it was “a joyous celebration of film people, which I hope will encourage others to get involved”.

The 12-day festival will really turn on the jets on Wednesday with the arrival of Tom Cruise — his first trip to the festival in exactly 30 years — for the European launch of “Top Gun: Maverick”.

The sequel, long delayed by the pandemic, has already been getting rave reviews and gives Cannes a chance to honour Cruise, described by festival director Thierry Fremaux as “someone who is devoted to cinema”.

As well as the lighter fare playing out of competition — which also includes Baz Luhrmann’s much-anticipated rock’n’roll biopic “Elvis” next week — there are 21 films vying for the Palme d’Or top prize.

One of the first to be shown will be “Tchaikovsky’s Wife” by Russian director Kirill Serebrennikov, who left his country in March following a controversial embezzlement trial his supporters said was politically motivated.

Serebrennikov was unable to attend Cannes for two previous nominations due to the court case that banned him from leaving Russia for three years.

The final film by Lithuanian director Mantas Kvedaravicius, who was killed in Ukraine last month, will get a special screening.

He was filming a follow-up to his celebrated documentary “Mariupolis” about the conflict in Ukraine’s Donbas region, when he was reportedly captured and killed by Russian forces, according to Kyiv.

Ukraine’s beleaguered filmmakers will get a special day at the industry marketplace and one of its most promising directors, Sergei Loznitsa, will show “The Natural History of Destruction”, about the bombing of German cities in World War II.

The head of the jury charged with selecting the winners this year, French actor Vincent Lindon, said the invasion of Ukraine had penetrated even the glamorous bubble that is Cannes, which he noted had been founded as artists’ response to fascism.

“The torments of the world, which is bleeding, suffering, burning… they rack my conscience,” he told the opening ceremony.

Lindon starred in last year’s Palme-winning gore-fest “Titane”, the only time a Cannes jury has watched a woman being impregnated by a car.

It was the sort of brash and radical choice that has ensured Cannes has maintained its edge for three-quarters of a century, having held its first edition in the immediate aftermath of World War II.

In this article:célébrités, cinéma, Festival