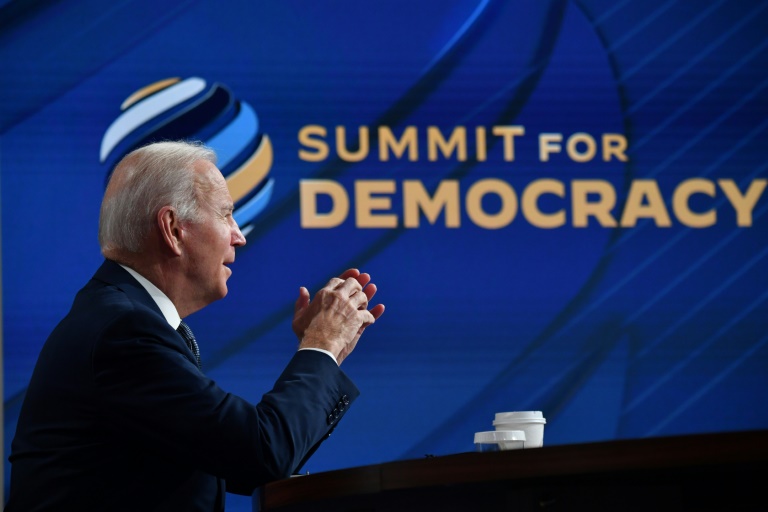 Democracy faces “sustained and alarming challenges” worldwide, US President Joe Biden said Thursday at a virtual summit on democracy where he sparked controversy by pointedly not inviting China and Russia.

Biden, who took office in January amid the biggest US political crisis for decades, said trends are “largely pointing in the wrong direction” and that “more than ever, democracy needs champions.”

“We stand at an inflection point,” Biden said. “Will we allow the backward slide of rights and democracy to continue unchecked?”

The two-day event, held by video link because of the coronavirus pandemic, was billed by the White House as US leadership in an existential struggle between democracies and powerful autocracies or dictatorships.

“Make no mistake, we’re at a moment of democratic reckoning,” said Uzra Zeya, the Under Secretary of State for Civilian Security, Democracy, and Human Rights. “Countries in virtually every region of the world have experienced degrees of democratic backsliding.”

The summit featured opening remarks from Biden and Secretary of State Antony Blinken, with representatives from some 100 governments, as well as NGOs, private businesses, philanthropical organizations and legislatures attending.

Biden went into the summit with the United States facing criticism over the foreign guest list and deep trouble on the domestic political front, with Donald Trump pursuing his shocking attempt to discredit the 2020 election in which he lost.

There was also tension simply over who should be on — and off — the list of invitees.

China and Russia, which Biden describes as leaders of the autocracies camp, were demonstratively excluded, prompting scathing complaints.

“No country has the right to judge the world’s vast and varied political landscape by a single yardstick,” wrote ambassadors Anatoly Antonov of Russia and Qin Gang of China in a joint essay last month.

Deciding which other countries should be barred from the summit for human rights abuses or vote rigging was also fraught.

For example, Pakistan and the Philippines were invited, while EU member Hungary’s nationalist government was out. Brazil’s right-wing President Jair Bolsonaro was invited, while the leader of NATO member Turkey, Recep Tayyip Erdogan, was shunned.

Biden called on world leaders to make concrete pledges during the summit and the United States kicked off with a promise of $424 million worth of programs to help protect media freedoms, combat corruption and support free elections around the world.

These include millions of dollars in US funding for strengthening election integrity and $30 million for an international fund for supporting independent media in “resource-poor and fragile settings.”

The most awkward element of the summit, however, was the fact that Biden is struggling to restore faith in democracy at home, let alone on the other side of the world.

Trump refuses to recognize the results of the 2020 election.

With the help of sympathetic media outlets, including the powerful Fox News, the former Republican president continues to spread lies about fraud to his tens of millions of supporters.

And with shockwaves from the January 6 storming of Congress by Trump supporters still reverberating, there are growing fears over the 2022 legislative elections and the 2024 presidential vote in which Trump may seek a comeback.

“Our problems here are much worse than in any other Western democracy. We had our Capitol building attacked, an attempted coup. We haven’t seen that happen in Paris, or at the Bundestag, or at the EU headquarters in Brussels,” he said.

“If we want to compete, we’ve got to do our best and that is really more up to us within the country than somehow getting 100 leaders together and saying, ‘We like democracy.'”