This week, Quartz introduced a new set of augmented reality features for its iOS app. Built on top of Apple’s just-launched ARKit platform, they’re intended to help people “understand objects in the news.” The publication is using AR visualisations to create 3D models of landmarks, landscapes and data sources like charts and graphs.
Quartz isn’t alone in utilising AR to help deliver the news. A cursory glance at some of the biggest media organisations reveals most are already dabbling in the technology. The execution differs by outlet but each is aiming for the same goal. They want to make the news more accessible and offer visitors an “experience,” rather than a static article.
Brands including BuzzFeed, Vox Media, Vice, CNN and The New York Times are all building content for augmented reality, virtual reality or both. Virtual reality is generally the focus though, with BuzzFeed exploring 360-degree videos, The New York Times emphasising digital storytelling and CNN offering virtual reality reporting from a dedicated team of journalists. Augmented reality content is still relatively scarce. 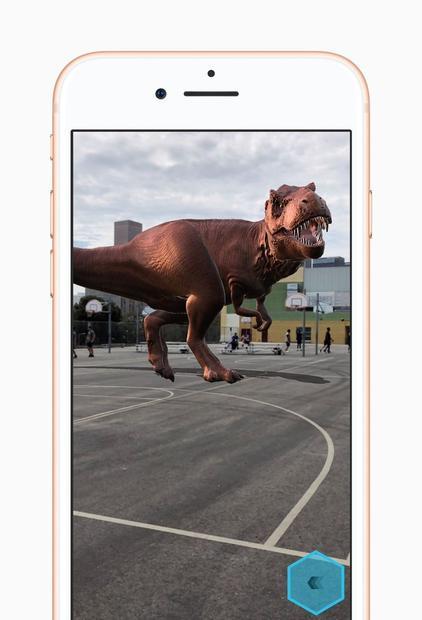 READ NEXT: Apple’s iPhone event was really about making AR mainstream
This is down to the obscurity of AR software. Although virtual reality is hardly commonplace, it’s had a longer time to establish itself than the fledgling AR. This week’s launch of ARKit should help to increase awareness and adoption of the technology, encouraging more publishers to start producing AR content. With ARKit acquiring an audience of hundreds of millions of users overnight, there’s suddenly an impetus to make an entrance in the space.
For Quartz, AR represents an opportunity to more directly involve the reader in stories without placing extra demands on them. Unlike VR, AR extends the current experience instead of replacing it. There’s no headset to wear or new navigation model to learn.
As you browse through an article, you could view AR content in the same way you normally look at photos or videos. AR offers two-way interaction though, letting you engage directly with the content on the screen. That’s exciting for companies like Quartz, which expect visitors will come away with an enhanced understanding after they’ve visualised an article’s material. READ NEXT: Apple launches iOS 11, bringing augmented reality to the masses
“In the same way we can use images and emoji and gifs to bring alive the stories we’re sharing, we think we can use AR to help people understand objects in the news,” Nieman Lab reports John Keefe, head of Quartz’s Bot Studio, said. “When it comes to the news, if you want to help people experience an object or space, large or small, we think we can help people better understand something if they can manipulate it themselves.”
Across VR and AR, 36 percent of publishers are thought to be exploring the possibilities of the technology. The biggest barrier to entry is the high cost of filmmaking equipment, a lack of experienced developers and the small audience. Combined, these factors make content creation unappealing to all but the biggest, most forward-thinking firms.
Still, consumer familiarity with augmented reality looks set to rise dramatically over the next few months. With ARKit, Snapchat filters and Pokémon Go all having an impact on consumer awareness, deciding to take the plunge on AR could soon be more attractive to smaller publishers too. A successful entry could redefine an organisation’s outlook, positioning it for the future of digital media.