In March of 2018, Morris’ silver streak finally ended, and she won her first gold medal at the 2018 IAAF World Indoor Championships in Birmingham. “Oh my gosh. I really wanted it, since I had gotten silver three times, and I felt ready,” she said. “My technique was feeling really good, and I was ready to work for it, so I did. It felt great to break through that silver streak.”

At the 2016 Olympic Games in Rio de Janeiro, Morris earned the silver medal. “That was a very bittersweet moment because obviously I took home my first Olympic medal,” she said. “That was able to drive me since a few weeks after the Olympic Games, I jumped 5.00 meters,” she added, which is a personal best for Morris.

On her plans for the future, she said, “I would like to create a gold streak. I’ve had my silver streak. In order to achieve that, I need to focus on maintaining what I’m good at and fixing what I’m not so good at. That’s how my coach {Bryan Compton] and I plan our training. He has been my coach since college.”

This May, Morris is excited to compete at the 44th Prefontaine Classic in Eugene, Oregon. “I will be at the Pre Classic. I’m glad they finally have women’s pole vault there,” she said. “I just discovered a weird fact: the whole entire state of Oregon does not have a full indoor track. I had no idea about this. That is crazy since Oregon is one of the most track friendly states in America.”

Morris shared that she is looking forward to the 2020 Summer Olympic Games in Tokyo. She is drawn to the sport since she is a “daredevil,” and it fits her personality perfectly. “You need to be extremely brave to be a pole vaulter. You need to trust in your training. It is just fun when you are flying through the air. I love the pole vault community that comes with it. I love the vault community. It is so helpful and uplifting,” she said. 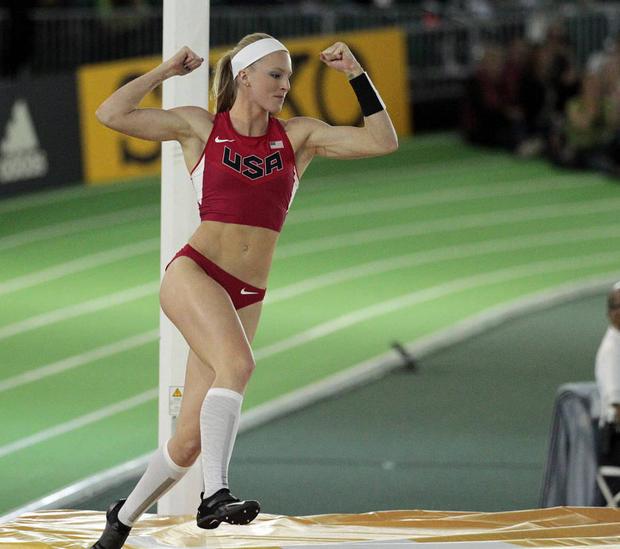 She admitted that the sport of pole vault has a lot of camaraderie in general. “A lot of people are surprised by our camaraderie. It comes naturally to us, since there are so many elements that are against us. We are literally already fighting gravity, and we don’t want to put each other down. We want to lift each other up. I feel that once one athlete is jumping well, it rubs off on the rest of the competition. We are constantly helping each other out. I feel it’s just a pole vaulter thing. Somehow it is,” she said.

Morris had nothing but the greatest remarks about fellow American pole vaulter Sam Kendricks (2017 World Champion, 2016 Olympic bronze medalist). “We call ourselves ‘Twins.’ We really are like brother and sister. Sam is amazing. He is so great and he motivates me as well. He is such a consistent athlete and he is humble, and I try my best to follow his example,” she said.

She also praised veteran pole vaulter Bubba Sparks (who has practiced the sport for 52 years) for his support. “Bubba knows everything about pole vault. It’s crazy. Bubba is so encouraging. I just love the community that comes with pole vault,” she said.

On the impact of technology on pole vault, Morris said, “I use video all the time. It is incredible what it has done for pole vaulting and all sports. You can take a slow motion video of your performance, and you can sit down and compare it and you can learn so much more about your technique than you could before. Technology has really changed the game.”

She noted that she has also used GoPro in her work-outs. “You can watch my vault from first person perspective. I think GoPros are so cool,” she said.

On the bio-mechanical analysis of track and field events over the years, she said, “I think it’s really cool that they dip their toes into that, and get more data out there on athletes in general, where people can see what it takes to jump higher or throw farther.”

For aspiring pole vaulters, she encouraged them to go out and find a good coach. “That is the key to starting off on the right foot as a pole vaulter. If you can’t find a right coach, then make good use of social media, and take videos of yourself, and become a student of pole vault, and learn how to pole vault correctly. That will help you out in the long run,” she said.

Morris defined success as “Really enjoying what you are doing” and “Feeling like you have a purpose.” “We all have dreams we want to achieve, but chasing the dream is underappreciated. The journey to the dream is underappreciated. Somebody who is successful is doing something that they love and they are passionate about, and helping others do that as well,” she said.

Aside from pole vaulting, she enjoys music. “I grew up playing violin, and I taught myself acoustic guitar. Both of my parents can sing pretty well, so I’ve inherited their singing abilities. I’ve had that musical incarnation since childhood,” she said, prior to listing Taylor Swift as a musical influence. “I really connected with Taylor when I was 15 years old, when she got popular. I write my own songs.”