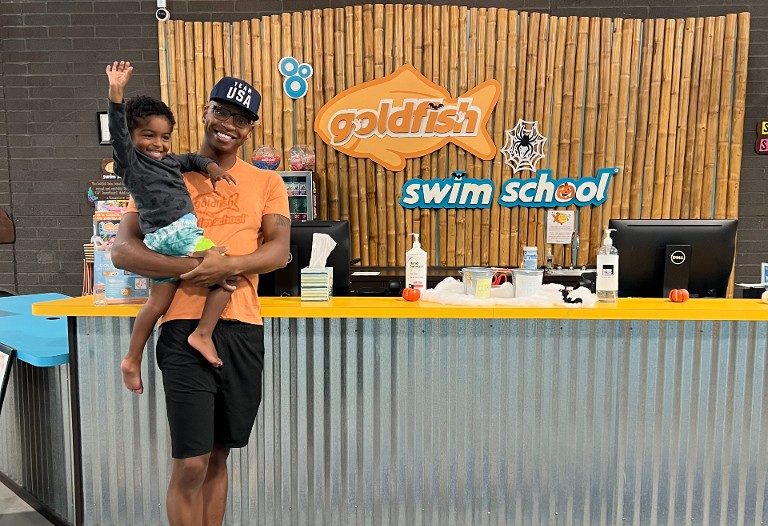 On his partnership with the Goldfish Swim School, Jones said, “It feels amazing. I feel like things have come full circle. When I had my son, Ayvn, the biggest thing I wanted to do is give him a positive experience in the water. I went to different locations and different swim schools and he enjoyed himself there too, but there was something special when he went to Goldfish Swim School. When Ayvn did his first lesson there, he loved it. With Goldfish, we found the perfect fit for him.”

Jones is the first African American world record holder, and he will be spreading an important message of water safety. This partnership aims to raise awareness on the significance of learning to swim, bridging the minority swim gap, and providing a role model for young children.

Just in time for National Inspirational Role Models Month (November), the Goldfish Swim School, the leading premier learn-to-swim franchise, is diving into a new partnership with role model Cullen Jones, a four-time Olympic gold medalist, and the first African American swimmer to hold a world record. Together, they join forces to spread the important message of water safety and drowning prevention, while making strides to bridge the minority swim gap.

Sadly, drowning remains the number one cause of injury-related death among children ages one to four, taking the lives of three children in the United States every day. In addition, it’s been reported that more than 60 percent of African American children cannot swim. Goldfish Swim School and Jones are committed to making a positive impact to help lower these staggering statistics by bringing greater awareness to the importance of swim lessons, as they have the ability to reduce the risk of childhood drowning by 88 percent.

Jones has felt the impact of these statistics firsthand. At five years old, he nearly drowned while visiting an amusement park with his family. It was at that point his parents enrolled him in swim lessons, and his love of the sport developed. From learning to swim to becoming an Olympian, to championing water safety and drowning prevention, Jones has made it his life mission to bring greater awareness to the importance of all children learning to swim.

As a newer parent himself, Jones’ passion for water safety only continues to strengthen. Jones and his wife, Rupi, welcomed their son Ayvn into the world in 2019. Since then, Ayvn has already developed a love of the water, taking swim lessons at Goldfish Swim School.

The partnership came naturally as Jones is an ambassador and board member of the USA Swimming Foundation, the philanthropic arm of USA Swimming, where Goldfish Swim School is an official partner. Goldfish Swim School has committed to raising $1 million for the Foundation, which supports swim lesson providers with resources, materials, and grant funding to allow the opportunity for every child across the country to learn to swim.

Jones recently teamed up with Goldfish Swim School for its latest giveback campaign – “Safer Swimmer Pledge” – that reached over 400 million people with the message of prioritizing water safety and drowning prevention. Jones leveraged his alignment with Speedo USA as the Philanthropic Sales Manager to incorporate an additional fundraising arm into the campaign.

Goldfish Swim School provides swim lessons and water safety instruction to infants and children ages four months to 12 years, teaching children how to be safer in and around the water. Each school offers swim lessons and programs using a proprietary philosophy, The Science of SwimPlay, to build life skills both in and out of the water using play-based learning in a fun and safe environment.

The franchise network spans 120-plus schools across North America and each school’s number one focus and main priority is always the same – educating children on water safety while teaching them how to swim and respect the water.

On the title of the current chapter of his life, Jones said with a sweet laugh, “Goldfish.” “Now, I am trying to manage everything that I do,” he said.

To learn more about the Goldfish Swim School, check out its official website.

Jones’ goal is for the landscape of swimming to become more inclusive. “I have a child that loves the water, and I have a feeling that I might be a parent in the stands watching him swim. I want him to feel comfortable in the sport,” he said.

“It is my responsibility that my son comes into a sport that he feels open and excited about doing,” he added.

Jones opened up about serving as Assistant Coach of the DC Trident swimming team in the ISL Season 3 with Kaitlin Sandeno as the General Mananger. “That is definitely a new adventure for me,” he said.

“It’s amazing to be working with Kaitlin [Sandeno] and to be in this kind of role,” he said. “We have a great relationship and it’s good to spend six weeks with DC Trident.”

“DC Trident is making big waves now, and it is great to be a dominant team,” he added.

Jones shared that he enjoyed being a part of “The Greatest Race” on Peacock. “When it came out, it had such a perfect message to it,” he said. “The timing was perfect and the response has been insane. Young kids are coming up to me asking for autographs and they weren’t even born when I swam that race.”

Regarding his definition of the word success, he said, “It’s not about me anymore. It’s really about Ayvn, my son. I’m at home on daddy duty and I am loving every minute of it. I wouldn’t change this life for anything. Being able to have a place where Ayvn is able to have positive experiences and to teach him about swimming is the greatest thing I could ever ask for.”