Author/Illustrator Paddy Donnelly Wins Gold Medal at IPPY Awards for The Vanishing Lake. The children’s book is based on a real lake that disappears and reappears every few days 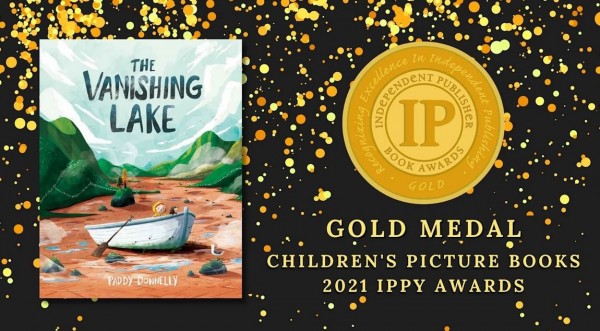 LOS ANGELES – June 11, 2021 – THE VANISHING LAKE, a children’s book written and illustrated by Paddy Donnelly, won a gold medal from the 2021 Independent Publishers Awards (IPPY) in the children’s picture books category. The IPPY awards recognize excellence in independent publishing and showcase the best books from North America and the English-speaking world.

THE VANISHING LAKE, published by Yeehoo Press, celebrates a young girl’s determination, a granddad’s wisdom, and the natural world’s fantastical wonders. Medalists were chosen from a variety of entries for exemplifying the daring spirit of independent publishing “to break new ground and bring about change, not only to the world of publishing but to our society.” The judges found THE VANISHING LAKE to be the most heartfelt, unique, outspoken, and experimental among all the entries in the children’s picture books category.

Donnelly is an Irish author and illustrator living in Belgium. He grew up on the northern coast of Ireland, surrounded by mythical stories of giants, magical creatures, and shape-shifting animals — all set in a stunning landscape from another time. This prompted his love for nature, animals, the sea, and storytelling. He creates his illustrations digitally but loves working with a textured, painterly approach. THE VANISHING LAKE is his debut author-illustrated picture book, based on a real lake close to his childhood home in Ireland.

“This story is based on a real place, close to where I grew up in Ballycastle in Ireland. It’s a lake called Loughareema, which actually does disappear and reappear every few days, depending on the weather. Growing up in Ireland, storytelling is an important part of life, so I was surrounded by myths and legends from a young age, and I think that’s had a big influence on what stories I like to write about,” Donnelly said.

THE VANISHING LAKE is available on Amazon, Barnes & Noble, and from many other booksellers. For more information on the book, visit yeehoopress.com/books/the-vanishing-lake