And, debuting this past September, Ron Howard’s “Eight Days A Week – The Beatles, The Touring Years.”
With the burgeoning of the Internet and the convergence of media formats, the ability to tell a story or get the “word” out has reached the masses like never before. This is something that comedian Paco Romane recognizes emphatically. He has been producing and hosting a podcast called ‘Sup Doc’ for over a year and it has become one of the highlights of his working schedule.

“To me,” said Romane, “the best documentaries are metaphors, an allegory of life.”

So far Sup Doc has posted over 42 podcasts. San Francisco-based comedian Paco Romane is just warming up.
Courtesy of Paco Romane and Sup Doc
“I am a documentary fan. And this is a way to converse with people, especially my fellow comedians. I’ve found that comedians love documentaries. Each episode of our podcast is an interview/conversation with a guest that has a unique connection to the documentary they’ve hand pick. We’ve talked with comedians, directors, musicians, hosts, writers, and actors. We learn a lot about our guests and together we dig deep into the documentary they’ve selected. The guests we’ve interviewed are as diverse as the docs they have selected like: comedian/actor Jamie DeWolf (great-grandson of L Ron Hubbard) about Going Clear: Scientology and the Prison of Belief, musician Dan Deacon about Gimme Shelter, comedian Todd Glass and Religulous, director Marjorie Sturm about her movie The Cult of JT Leroy, composure William Hutson of the band ‘clipping’ about The Carter, Rodney Ascher the director of Room 237 and The Nightmare, NPR’s Jesse Thorn about Fast, Cheap and Out Of Control.”

For over a decade Romane has been immersed in San Francisco’s comedy scene and loving every minute of it. A native of Michigan, he headed westward with his comedic talents and settled in San Francisco’s Haight-Ashbury District. When he first arrived in the City, established venues like The Holy City Zoo, The Purple Onion, were still in existence. Today they are gone. Cobb’s Comedy Club and The Punch Line are still around, but with rising rents and skyrocketing real estate values the question is for how long?

Like so many performers, be they comedians, musicians, singers, actors, he has had to adjust. Not just to find a venue to perform but to make one. In this instance, this is where current technology has been an advantage, and not a setback. “Podcasts are relatively cheap, he said, compared to air time on radio or a TV station and we have thankfully managed to find sponsors like J-Lab Audio.” 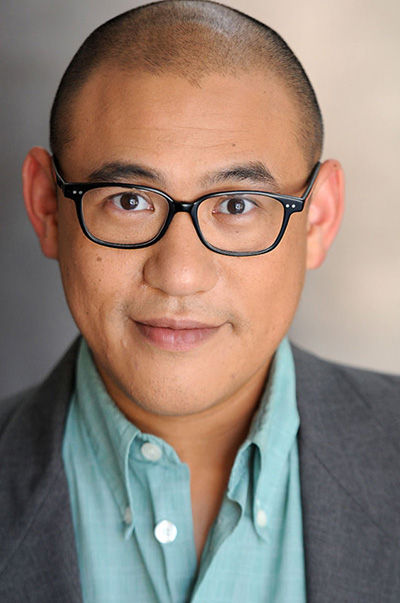 Bay Area comedian, George Chen co-hosts Sup Doc podcast with fellow comedian Paco Romane.
Lisa Keating
Romane co-hosts the podcast with fellow comedian George Chen. “I had done some podcasting before,” he said. “But Sup Doc is moving towards becoming an established regular show. With the help of engineer Will Scovill Sup Doc is moving beyond just another project.”

But like all people who make and nurture something they love, they want it to succeed. And, Romane has the confidence that it will. As he sees it, Sup Doc is already a success. “It has exceeded my expectations and the journey so far has been amazing.”

Romane is grateful for the opportunity that has arisen through podcast technology and to his co-host and crew.

“I came into Sup Doc six months into its inception,” said Scovill. “What impressed me most was how professional Paco and George are and all I do is help with the audio-tech aspect to it. George and Paco do all the research and programming scheduling. That took a lot of weight off my shoulders.”

Like Chen and Romane he too understands what the current realities are in pursing a media or performer career. In terms of building one’s career having to create venues or invent roles and gigs, that’s the reality of today. “Comedy is a back up for me,” said Scovill. “It is something I just stumbled into. I come from a filmmaking background.”

Scovill worked on reviews of TV shows and even worked on a sports show. “Documentaries are a better fit for me,” he said, “more manageable with a focus on one story not episodes, like TV shows.”

Chen played in bands and worked for the record labels Tigerbeat6 and Alternative Tentacles. He gravitated towards comedy as an outlet of expression. “I can be analytical,” Chen said. “But we are not academics or film journalists. Paco has seen more documentaries than I have, but I do enjoy them.”

What he and Romane look for are interesting and engaging guests who want to have a conversation about a particular documentary.

Chen noted that the exciting aspect to what they are doing in Sup Doc is, “we are not beholden to anyone. Patreon is a funding source and sure we would like to make money, but we also have low-overhead.”

This gives Chen, Romane and Scovill tremendous creative freedom and flexibility. “To make a living doing this would be wonderful,” said Scovill. But he is realistic and knows that he must not “put all the eggs in one basket,” as the saying goes. “I am accustomed to being diversified, he said. I’ve got other projects. Yet if this becomes big, that’s great. I have helped George and Paco and gotten the tech side of it set up, so that if the show takes off, Sup Doc is ready.”

With more than 42 podcasts posted, for Romane it is not so much a question of if Sup Doc takes off, it’s a matter of when. “I’d love to have Ron Howard on Sup Doc, Romane said, to talk about his Beatles film. Does anyone out there have his contact info?”
Sup Doc is a brilliant idea and to say that Sup Doc is a “one-of-a-kind” podcast is not an exaggeration. Sure Paco Romane and George Chen are comedians but they handle their guests and the docs with care while keeping the conversation lively. This isn’t the kind of comedy podcast where the hosts do a lot of yelling and talking over their guests. Sup Doc manages to combine authenticity and humor in every episode as they explore their guest’s life story and personal perspective with the story behind the selected documentary. It’s like a documentary inside a documentary. You’ll laugh and you’ll learn and more importantly you’ll be entertained.

You can hear all of Sup Doc podcasts episodes so far on their website. Or subscribe to them on iTunes.

US Secretary of State Antony Blinken boards an aircraft as he departs for New Delhi, India and Kuwait. Blinken said Afghanistan would become a...