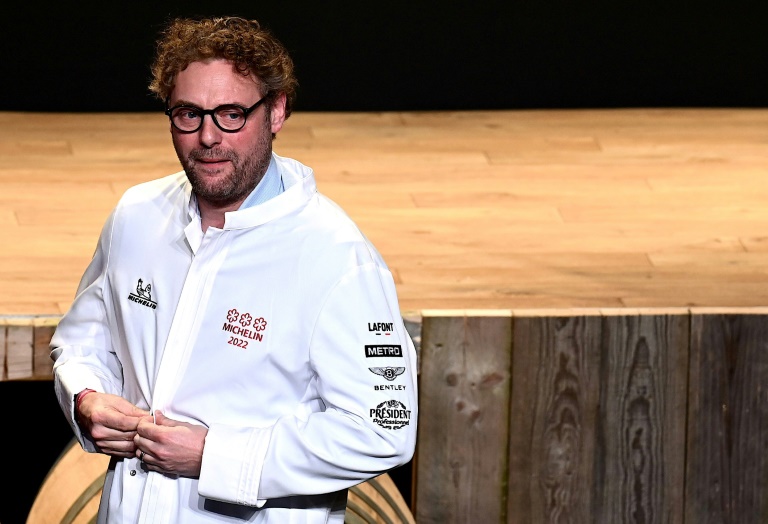 The Michelin Guide launched its 2022 edition on Tuesday, celebrating the resilience of the French food industry after two difficult years of pandemic, but calling for more women chefs.

Expected each year with apprehension by chefs and gourmets, the famous red guidebook revealed this year’s winners in Cognac in southwest France, the first time in its 122 years the ceremony has taken place outside Paris.

Two restaurants were awarded the highest distinction of three stars.

Arnaud Donckele, 44, known for his extraordinary sauces, shot straight to the top ranking for his new restaurant Plenitude in the Samaritaine department store in Paris.

Husband-and-wife team Dimitri and Marielle Droisneau also joined the top rank for their Mediterranean restaurant, La Villa Madie, in Cassis, near Marseille, which judges praised for its “poetic home-style cuisine”.

“2021 was another difficult year for restaurants. The impact of the pandemic continues to weigh on them. Prices for ingredients are rising enormously, and recruiting and keeping staff is a challenge for everyone,” said the guide’s director Gwendal Poullennec at the ceremony.

“Despite everything, we have a great selection, but I see that we have too few women,” he said, calling on restaurants to continue the “profound changes” they have been making to improve the imbalance.

Much focus in recent years has been on more minimalist, sustainably sourced cooking, which the guide has been rewarding with ‘green stars’ since 2020.

There are now 87 green star restaurants in France, with six new additions in the new guide.

Last year’s ceremony, in the midst of a months-long shutdown caused by the pandemic, was a low-key affair with only one chef — Alexandre Mazzia — promoted to three stars.

But this year marked a rejuvenation, with a maskless crowd packing out the theatre in Cognac, a small town with a huge international reputation for its namesake spirit.

Controversies have long swirled around the Michelin Guide and the pressure it places on chefs.

In 2020, foodies were shocked when the Auberge du Pont de Collonges — the oldest three-starred restaurant in the world — was downgraded following the death of legendary chef, Paul Bocuse.

A year earlier, Marc Veyrat became the first to sue the guidebook, after losing the third star of his Alps restaurant La Maison des Bois just a year after it was awarded.

He lost the case and said he never again wanted to see a Michelin inspector in his restaurants.

Poullennec said demotions were vital if the guidebook was to “remain relevant to customers.”

Judging by the tears and emotion onstage in Cognac, the guidebook continues to be a major source of motivation for chefs and their teams.

France is currently in a new golden age for cuisine after a long period in which it was accused of growing stale and lazy.

“Michelin is still very important for chefs and owners. If it motivates their kitchen staff and team, and brings more diners and curiosity, then it has value,” she said.

Created in 1900 by tyre manufacturers Andre and Edouard Michelin as a guide for motorists, it now has editions across Europe, Asia, North and South America.

In March, it announced it was suspending operations in Russia due to the war, just a few months after launching its first guide in Moscow.

In this article:Food, France, Lifestyle, michelin