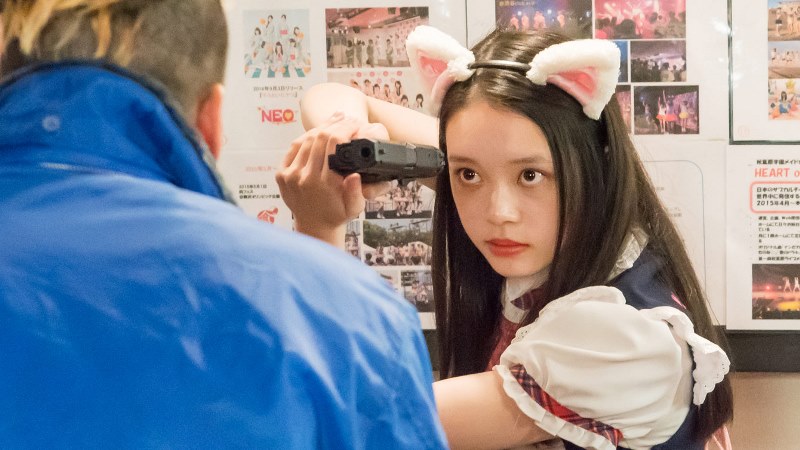 This week’s releases include an unlikely pair of killers-for-hire; a new prehistoric adventure; a truncated, but pointed animated season; a disappointing reboot; an intimate portrait of an artist; and a martial arts prequel.

An inventive, lyrical ode to creativity and an intimate examination of the artistic process of musician and cultural icon Nick Cave. In their debut feature directors Iain Forsyth and Jane Pollard fuse drama and documentary, weaving a staged day in Cave’s life with never-before-seen verité observation of his creative cycle.

Much like its subject, this film doesn’t fit into an easily defined genre. It contains intimate moments in which Cave discusses his relationships, his connection to sex and his writing process, sometimes with a psychoanalyst. It follows his journey as he composes a new song, which is eventually seen to come to fruition in an epic performance at the Sydney Opera House. He has deep conversations with some of his collaborators while driving around Brighton, England, including multi-instrumentalist Warren Ellis, actor and friend Ray Winstone, and singer Kylie Minogue. Somehow, the filmmakers weave together all these seemingly fractured pieces to create a mesmerizing portrait of an artist with an excellent soundtrack.

There are no special features. (MVD Visual)

And Just Like That… The Complete First Season (DVD)

It was already disappointing to learn Kim Cattrall’s Samantha would not be returning to the Sex and the City cast and to have Big’s fate spoiled due to the Peloton controversy, but one hoped the series would make up for these shortcomings. Unfortunately, it’s all a bit of a mess that never gets tidied. The big emotional moment is ruined by Carrie’s ineptitude; Miranda’s midlife crisis is clumsy and desperate; and Charlotte’s lack of evolution just seems tired. Meanwhile, the attempts to keep Samantha involved via texts and tokens of affection are lame. Surprisingly, Charlotte’s children end up being some of the season’s most interesting characters, saving several episodes.

There are no special features. (Warner Bros. Home Entertainment)

Upon graduation, highly trained teenage assassins Chisato (Akari Takaishi) and Mahiro (Saori Izawa) are informed by upper management that they will need to hold down “normal” jobs as a cover and — even worse — they’ll be forced to share an apartment. However, after an unfortunate run-in with a Yakuza member, the two must band together to survive an epic fight for their lives.

The first scene in the film unnecessarily calls into question whether the girls are really assassins or if they just have vivid imaginations. It then takes a few beats before audiences are assured they are in fact assassins and pretty good ones at that. However, that doesn’t make the story any less bizarre. The two have completely opposite personalities, meaning only one of them can actually function in the real world, while the other is content to live outside of it. It does make their attempts at employment amusing though, as a dark sense of humour runs through the whole narrative. It feels as if there’s a lot of buildup to the final fight, which does include an impressive hand-to-hand battle between two of the characters, but overall, it’s a bit anticlimactic.

While visiting Hong Kong, a young Master Ip (Miu Tse) intervenes in a kidnapping attempt, unintentionally igniting a turf war with a ruthless human trafficking ring. In retaliation, the gang kidnaps one of Ip Man’s close friends, leaving him with no choice but to challenge the group’s notoriously brutal boxing champion head-on.

This is a prequel to the existing Ip Man series, following a younger version of the Wing Chun master as he rights an injustice and tries to protect his friends. Since he’s less mature with lessons still to learn, his initial attempts create more problems for everyone. What this really means is there are more opportunities for big fight scenes in which Master Ip is outnumbered, but still triumphant. This picture also incorporates another form of martial arts practiced in Britain called Bartitsu — a combination of boxing, jujitsu and wrestling as one bystander not so subtly explains. This movie doesn’t quite measure up to the other pictures in the franchise, but still fits in with Ip Man series.

There are no special features. (Well Go USA Entertainment)

The film takes place four years after Isla Nublar’s destruction when dinosaurs roam the Earth again. Facing the cataclysmic consequences of a planet once again dominated by prehistoric predators, two generations of Jurassic heroes unite as doctors Ellie Sattler (Laura Dern), Ian Malcolm (Jeff Goldblum) and Alan Grant (Sam Neill) return to join Owen Grady (Chris Pratt) and Claire Dearing (Bryce Dallas Howard) for an incredible adventure that will determine the destiny of humans and dinosaurs once and for all.

The dinosaurs continue to be magnificent, mixing practical and CGI creatures (though it appears to be continuing to lean more heavily towards the latter). Seeing these extinct beasts roam, swim and fly never stops being awe-inspiring, particularly as they try to imitate their actual mannerisms and approximate their sounds. In addition, avid Jurassic fans will appreciate the many Easter eggs sprinkled throughout the narrative. Thus, it’s all the more unfortunate the film’s biggest obstacle is its own story. Bioengineering is always at the franchise’s core, but the villainous CEO at the plot’s centre is outrageously over the top. Then there’s the Maisie subplot that appears to be strictly designed to create a thin reason for kidnapping her and building the action around her rescue. Moreover, the need to setup a giant monster fight feels like an unnecessary attempt to emulate the recent Godzilla pictures. In the end, it all would’ve been better if the script stood up to its predecessors.

Special features include: extended version; “Battle at Big Rock”; “A New Breed of VFX”; and “Dinosaurs Among Us: Inside Jurassic World Dominion.” (Universal Pictures Home Entertainment)

It’s somewhat disappointing this season of South Park consists of only two extended episodes, though they expectedly hit hard at the pandemic. The first story is one of the show’s strangest, focusing on ridiculous acts of bestiality and an even grosser attempt at a COVID cure. The second episode is slightly tamer, centring on Cartman’s usual joke gone too far, causing the boys to try to bribe their teacher with a COVID vaccine. And the return of Mr. Garrison is its own can of worms. The commentary is still very relevant and difficult to miss, though that’s not to say there weren’t any potentially missed opportunities.