Disney has a long history of adapting classic fairy tales and popular legends for the screen, though their versions usually exclude the bloody elements previously woven into these narratives. Still, these animated renderings are the fundamental editions of these stories for many children. Now the studio is branching out, reimagining these tales for a live-action format that retains the original magic that endeared people for a lifetime. The latest retelling of Cinderella captures all the enchantment of the animated film while making the fantasy more real for audiences.

Ella (Lily James) grew up in the happiest of homes with two loving parents (Hayley Atwell and Ben Chaplin) who encouraged her whimsy. But sorrow befell the cottage at the edge of the forest when Ella’s mother died. Years later her father hoped to once again find happiness with a new wife (Cate Blanchett) who brought with her two daughters (Holliday Grainger and Sophie McShera). But they filled the house with darkness that only grew more wicked when Ella’s father passed away on a business trip. From that day forward, Ella was a mistreated servant in her own home. However a chance meeting with a young man in the forest offers her hope, which would have been even greater if she knew he was the Prince (Richard Madden). Forbidden from attending the palace ball by her stepmother, Ella’s Fairy Godmother (Helena Bonham Carter) appears to wipe away her tears and send her to the party in style. But her problems are not nearly over as her stepmother conspires to ensure it’s the last time Ella ever sees the Prince in spite of his exhaustive search for his true love. 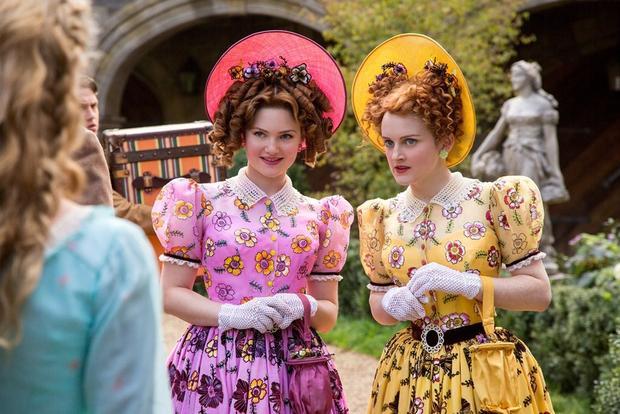 A scene from ‘Cinderella’
Walt Disney Studios
This is an absolutely lovely retelling of the fairy tale. James is wonderful as the ever optimistic protagonist who takes her mother’s dying counsel to heart: “Be generous and be kind.” No matter how terrible her step-family treats her, she believes it’s because they don’t realize they’re being cruel and her benevolence will eventually enlighten them. Of course Blanchett’s malicious stepmother repeatedly demonstrates that revelation is very unlikely, even adopting her daughters’ unkind nickname for the orphan girl: “Cinder-Ella.”

One element it’s reassuring to see maintained is Ella’s relationship with animals, particularly the insatiable mouse called Gus-Gus. She begins speaking to them as a child based on a suggestion that one only has to listen to hear their response. When she’s older, they are her only allies in the house and reciprocate her kindness. Fortunately none of the creatures actually can speak until they are transformed into Ella’s servants the night of the ball, avoiding any hints of madness in the character. In addition no one spontaneously breaks into song, though “A Dream Is A Wish Your Heart Makes” and “Bibbidi-Bobbidi-Boo” do play over the credits. 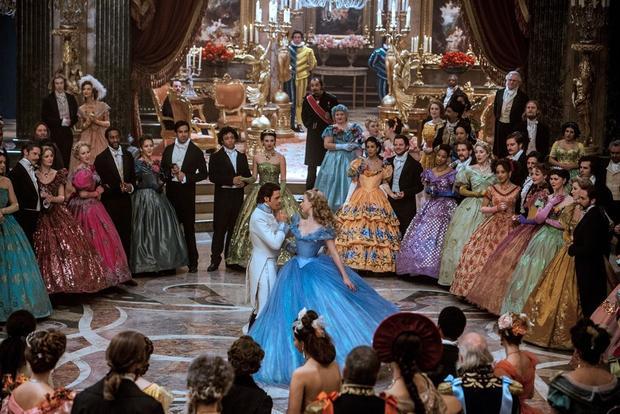 A scene from ‘Cinderella’
Walt Disney Studios
Director Kenneth Branagh once again demonstrates his skill in creating captivating films set in the realms of period and fantasy. The aesthetic is an ideal balance of elegant and fanciful, using rich and vibrant colours that make the picture tangible but not quite real. Rather than employ any elaborate camera techniques that could tamper with the dreamscape, it generally just zooms in or out of the scene to adjust the audience’s focus. The actors’ spot-on performances play an essential role in bringing the fairy tale to life in a manner that arouses adoration or abhorrence respectively. The costumes similarly contribute as Ella’s stepsisters never match her natural beauty in a simple frock in spite of their ostentatious, complementary wardrobes.

Everything about the picture hearkens back to the old school Disney princess that saved the studio 65 years ago, which is actually the best thing they could have done with this picture. Putting a real girl in Cinderella’s stunning blue gown (that shimmers shades of dusk as she twirls) and Swarovski-styled glass heels while maintaining the essential elements of the animated film is an accomplishment at which fans will not scoff because being swept away in her hopefulness, compassion and joy is part of the experience. However the one minor but valued alteration is a slightly more autonomous Ella who seems like she eventually would have found a way out from under her stepmother’s thumb even if the Prince and Fairy Godmother hadn’t shown up.

A scene from ‘Frozen Fever’
Walt Disney Studios
Advertisement. Scroll to continue reading.
As popular as this release is, it’s probably safe to say the Frozen short that screens before the feature was greeted with equal, if not more, anticipation. In Frozen Fever Elsa (Idina Menzel) wants to give Anna (Kristen Bell) the perfect birthday, but her plans are hindered by an oncoming cold. While the music of the original film was one of the highlights and probably has more legs than the movie itself, the five-minute “Making Today a Perfect Day” runs a bit long for a movie that is only seven minutes. However the miniature snowmen produced each time Elsa sneezes are adorable and probably the best part of the picture as Kristoff (Jonathan Groff) tries to keep the mischievousness creatures from eating Anna’s cake. With the short film garnering so much attention, it’s no surprise Disney announced its plans to make Frozen 2 the day before the princess double bill’s release.