Paquito D’Rivera defected to the United States from Cuba in 1981. Read his full biography on his website here. A photograph of Paquito D’Rivera with Willis Conover and an excerpt from D’Rivera’s 2005 book My Sax Life in which he describes the importance of Conover’s cultural diplomacy of the Cold War period can be seen here. An extensive collection of documents from Willis Conover’s career at the Voice of America, as well as personal papers, sound recordings and video recordings has been maintained by Maristella Feustle at the University of North Texas Libraries, Denton , TX.

Had he been alive, the White House and VOA snub of Paquito D’Rivera would have been a great disappointment to Willis Conover. White House officials changed their decision due to public pressure, but so far VOA has not reported on any of it. If there is a White House side to this story, international audiences did not find out about it from VOA even though the VOA Charter says that “VOA will present the policies of the United States clearly and effectively” and “VOA will represent America, not any single segment of American society, and will therefore present a balanced and comprehensive projection of significant American thought and institutions.”

According to media reports, including an article in Miami Herald, the White House had dis-invited 14-time Grammy winner Paquito D’Rivera—a strong proponent of human rights in Cuba—from playing at the White House on April 30, International Jazz Day. This year’s event is to be hosted by President Barack Obama and First Lady Michelle Obama. Sting, Chick Corea, Aretha Franklin, Diana Krall, Pat Metheny and Chucho Valdes are expected to attend. After being informed that he “had not passed the vetting process by the White House,” D’Rivera wrote a letter to President Obama reminding him that America still stands for freedom. It wasn’t until the letter became public a week later, and public pressure mounted, that the White House decided to re-invite him.

A search of Voice of America news websites—English, Spanish, and Russian—shows that whole controversy over the White House snub of Paquito D’Rivera has been ignored by VOA’s major language services. As former Voice of America director David Jackson correctly observed while commenting on another VOA controversy in 2015, a delay in reporting the story of NBC anchor Brian Williams, VOA should have recognized the Brian Williams controversy as “a teachable moment” to show the world American democracy in action. VOA should have done the same on the White House-Paquito D’Rivera story. After outside criticism, VOA eventually reported on the Brian Willimas story, but so far we have not seen anything from VOA on the White House-Paquito D’Rivera controversy even though jazz programming and Willis Conover had played such an important role in VOA’s history and D’Rivera paid tribute to Conover at a special concert at VOA headquarters in 2007. 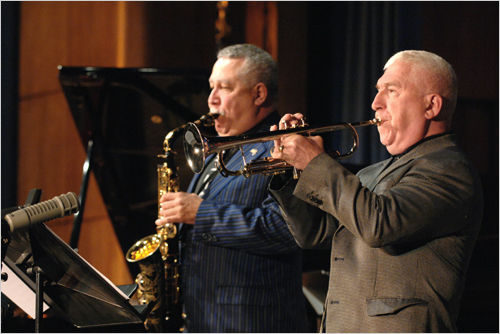 Jazz musicians Paquito D’Rivera and Valery Ponomarev play at a concert in tribute to Voice of America’s Willis Conover September 17, 2007 at VOA headquarters. The multi-ethnic quintet included D’Rivera, who was born in Cuba, Ponomarev (Russia), and musicians from the Czech Republic, Bulgaria and Cuba. Conover hosted a popular jazz program on VOA from 1955-1996. (VOA photo)
Voice of America (VOA) 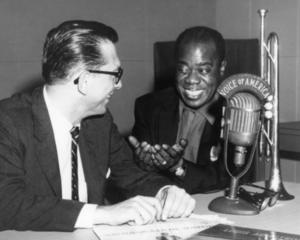 Willis Conover (1920-1996) was my friend when both of us had worked at VOA. I reintroduced his jazz programs with Polish translations during the martial law period in Poland in the early 1980s. Through the right combination of predominant political programming and cultural programming, VOA’s audiences in Poland multiplied in later years until democracy was fully restored.

Willis Conover eschewed political topics in his music programs and never became a full-time government employee, preferring instead to remain an independent contractor. That’s one reason he was able to travel to Poland in 1959 when it was still under communism, while VOA Polish Service political journalists and broadcasters, such as legendary World War II hero Zofia Korbonska, would not receive visas from the communist regime. But Willis Conover would have been nevertheless appalled had he learned that VOA Polish or Russian service snubbed a musician because he or she dared to criticize communist regimes. He himself would have never ignored any musician from behind the Iron Curtain for political reasons.

Marie Ciliberti, a former Voice of America Russian producer and United States Information Agency (USIA) public diplomacy expert who had worked with Willis Conover during his decades long career with VOA, posted a comment on social media: “Don’t let anyone tell you different. The USA is no longer the land of the free and home of the brave. Its coddling of the dueling dictators in Cuba is a ghastly spectacle.” The right kind of U.S. public diplomacy could have better explained President Obama’s desire to improve living conditions for ordinary Cubans and respect for human rights, but instead U.S. and international audiences have received mixed messages from the White House, from the State Department, and from the Voice of America. In his letter to President Obama, Paquito D’Rivera wrote:

“I suppose that this decision to ‘veto’ my presence was made without your knowledge, but my exclusion from the show will be made public. It is my civic duty as a citizen to warn you that even an event celebrating a musical genre that embodies the aspiration of freedom could be used precisely to do the opposite. Because of my respect towards you — which has only increased recently due to your performance in my native country — I believe it is my duty to inform you that your status as host is possibly being manipulated by the very people who deny the very principles that allowed you to become the President of this country, and which allow me to address the most powerful man on Earth with absolute freedom and without fearing repercussions.”

What a sad comment on the current state of U.S. public diplomacy. No evidence has emerged so far that any higher-ups in VOA or its parent agency, the Broadcasting Board of Governors (BBG), have ordered VOA journalists not to report on Paquito D’Rivera’s recent ordeal with the White House. But the end result was the same–no coverage of this sensitive human rights story–even though the BBG’s stated mission is “to inform, engage and connect people around the world in support of freedom and democracy.”

Then and now, some of the most talented and brave VOA journalists have always tried to overcome censorship and organizational dysfunction. In recent years, it has become a particularly uphill struggle, due not so much to any direct government censorship but to major mismanagement by the government bureaucracy of the BBG.

In the past, Radio Free Europeand Radio Liberty (RFE/RL) operated with much greater freedom and efficiency, but under the BBG bureaucracy, the performance of both VOA and RFE/RL has become uneven. One can still find great news coverage as well as one-sided reports unwittingly affirming Castro or Putin propaganda. One recent television report by both VOA and RFE/RL from Cuba included a clip of a Cuban proudly declaring that not only President Obama but also Russian President Vladimir Putin is “a friend in Cuba.” During President Obama’s recent visit to Cuba, a Voice of America headline shouted, “Obama to Meet with Raul Castro, Ally of New Era of US-Cuba Ties.” I doubt that even the White House or the State Department would call Raul Castro President Obama’s ally in the normalization process.

Mike Gonzalez, a senior fellow at The Heritage Foundation and an international correspondent, wrote in his commentary for The Daily Signal that “the White House decision to dis-invite a Grammy-award winning jazz legend who is a strong defender of democracy in Cuba was nothing short of contemptible.” Paquito D’Rivera’s open letter to President Obama, which resulted in his invitation being reinstated, has received a lot of media attention in the United States, but not from the Voice of America. In its past, the Voice of America was famous for two things: its human rights reporting, whenever VOA broadcasters were granted by their management some journalistic freedom, and the legendary hour-long program “Voice of America Jazz Hour” hosted by Willis Conover. These days many question its impact, including members of Congress from both parties.

VOA is now managed—some say mismanaged—by the Broadcasting Board of Governors, which Hillary Clinton when she was still Secretary of State and served on the BBG board called “practically defunct.” One can never be sure these days which U.S. news stories VOA will or will not cover and how well. While a sensitive Cuba story is ignored, VOA has time and resources to report on dead snakes found in an electrical box somewhere in the United States. In a recent meeting with some of the BBG governors, Secretary of State John Kerry said “Today’s Broadcasting Board of Governors is not the BBG of a few years ago.” He was misinformed. Whatever progress has been made by recently appointed BBG CEO John Lansing is far from enough. It may get worse because the BBG denies the need for major structural reforms through bipartisan legislation, H.R. 2323, proposed in Congress. VOA has new director, Pulitzer Prize-winning journalist Amanda Bennett. She only came on board since last week. RFE/RL has not had permanent leadership for more than two years.

I did an online search and found that neither VOA English News nor VOA Spanish Service had anything posted online on the Paquito D’Rivera-White House-Cuba controversy. The VOA Russian Service also had nothing an online search would produce. Willis Conover’s jazz programs were particularly popular in the Soviet Union. An online search of the Radio and TV Marti website also did not show any results for Paquito D’Rivera, but it is possible that Radio and TV Marti, which is also managed by the BBG, covered the controversy in its on-air broadcasts.

It’s a shame that the Voice of America, a U.S. taxpayer-funded media organization that once routinely reported on such human rights issues and promoted American culture and values with Willis Conover’s famous jazz programs, has been silent on Paquito D’Rivera’s letter to President Obama. I hope that new VOA director Amanda Bennett will make sure that such news stories will be covered by VOA in the future.

Ted Lipien is a former Voice of America acting associate director and author of “Wojtyla’s Women: How They Shaped the Life of Pope John Paul II and Changed the Catholic Church” (O-Books, UK, 2008).