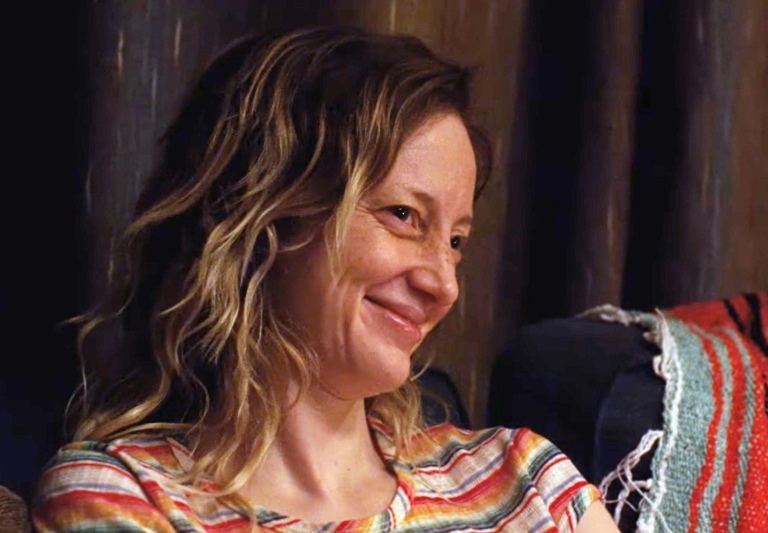 Acclaimed actress Andrea Riseborough chatted about starring in the film “To Leslie,” which was directed by Michael Morris.

Academy Award winner Hilary Swank once said: “As a film actor, you’ve got to figure out how to get the character you are playing small enough to get through a tiny lens yet big enough to fill the largest screen. The craft consists of making the right choices, the art consists of not noticing the craft.”

Andrea Riseborough as well as the cast, crew, and producers of “To Leslie” embody this wise quotation for their tremendous work in this Momentum Pictures movie.

The synopsis of “To Leslie” is as follows: It takes place seven years after a lottery win ($190,000), and it deals with a West Texas single mother, Leslie (played by Andrea Riseborough) who is alone, living hard at the bottom of a bottle.

With nowhere left to go, she is forced to come home, especially since her former friends Nancy (Oscar winner Allison Janney) and Dutch (Emmy nominee Stephen Root) want nothing to do with her anymore. Leslie has to confront her past, and thus make a challenging choice.

A motel employee, Sweeney (Marc Maron), helps give her a second chance in an effort to reconcile with her son James, and ultimately, find redemption.

On her experience taking on the role of Leslie, she said, “It was something that I certainly wanted to do. I had been planning it perhaps two years before we actually shot the film, and we had the opportunity to film it at the end of 2020 during the height of COVID, which was a difficult time to be shooting. It felt fortuitously right in a way because I was playing a character that was surrounded by people but was mildly isolated.”

On working with director Michael Morris, she said, “Michael is a very trusting director. Working with Michael was wonderful, and he was very generous. We had very little time to shoot this film, we shot it in 19 days, and sometimes we did 10 scenes a day. Michael gave us so much freedom, it felt like each scene was a new opportunity to really immerse ourselves in our story.”

The National Board of Review ranked “To Leslie” in its “Top 10 Independent Films.” Riseborough’s powerful acting work in this film has generated Oscar buzz by her peers in the motion picture industry, and rightfully so.

On working with her fellow co-stars, she said, “It was exquisite working with Allison Janney and being in her presence. She is an incredible force of nature, and a strong and wonderful human being. Stephen Root is a very wonderful actor, and both of their roles were a transformation for them. I worked with Owen Teague before since he played my son in ‘Bloodline,’ he is a really grounded and brilliant actor.”

Riseborough continued, “Working with Marc Maron was fantastic, there was so much vulnerability to his character, and it really opens up the story in the most vulnerable way. When you watch the film, you really have compassion for him wanting to save her in a way, in an effort to help reform her.”

“There are redeeming things about the journey that she does on. You really get to spend some time with the characters going through life, and it’s not a moral lens or a judgment. That’s what makes the film so pure, authentic and intimate really. Also, we shot it on film and in so many ways, this was the right time to make this film,” she added.

She noted that Michael’s choices of music in silence was very fitting and well-judged.

Riseborough shared that the screenwriter Ryan Binaco wrote the screenplay in an effort to understand his mother. “This movie is a love song to his mother, and he was able to give her in this film what he couldn’t give her in real life, and that was really important to him. Ryan celebrates her in the film,” she said.

“In the film, you appreciate Leslie’s wild spirit, which is really magnetic. The film catered to all of that,” she added.

On being an actress and filmmaker in the digital age, Riseborough said, “I think it’s a strange time. I am still getting to grips with what these platforms mean, and what this new content means. I think it’s a time of discovery, and it’s a really interesting one. I will always prefer film, it has its own personality, it is almost a character in a piece.”

For young and aspiring actors, Riseborough said, “I am not the best person to give anybody advice, I just wish them the best of luck.”

She acknowledged that there have been many moments in her career that have helped define her.

On her daily motivations as an actress, she said, “I am motivated by storytelling, that is what we are all trying to do. If not that, then creating an immersive experience.”

Regarding her plans for the future, Riseborough said with a sweet laugh, “I am very open.” “I have my own film company so we have lots of things in development. I am going to keep those things close to my heart for now,” she said.

Riseborough concluded about “To Leslie,” “If people are interested in a character-driven film that is full of hope, then this is something that they would enjoy.”

To learn more about esteemed actress Andrea Riseborough, check out her IMDb page.

Read More: ‘To Leslie’ is an Oscar-worthy film by Michael Morris.