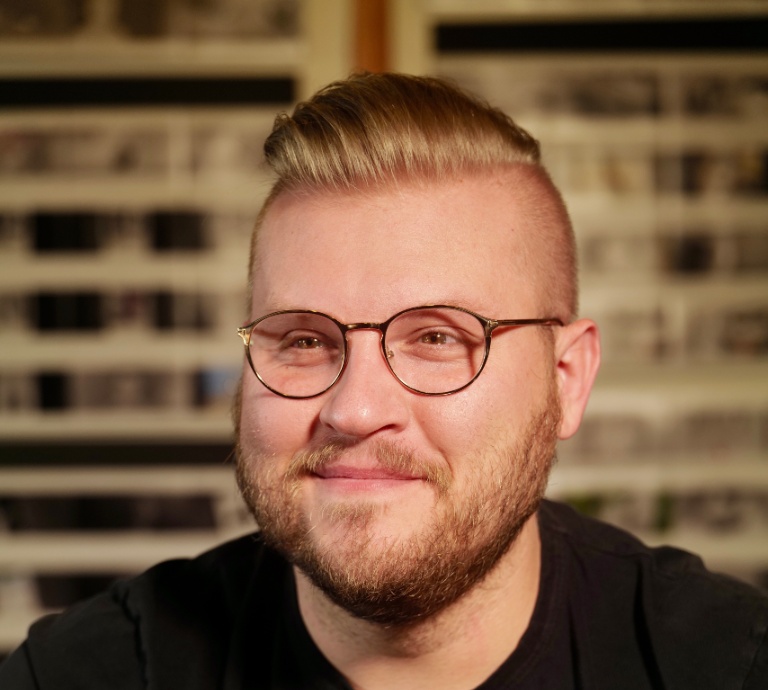 Acclaimed director and producer Andy Vallentine chatted about his new short film “The Letter Men,” which he directed and co-wrote.

It stars actors Garrett Clayton and Matthew Postlethwaite, and it was inspired by true events. The screenplay was co-penned by Andy and Danny Vallentine.

“The Letter Men” was based on the largest collection of queer love letters from World Warr II between two men Gilbert Bradley (Garrett Clayton) and Gordon Bowsher (Matthew Postlethwaite). It is a window into the untold true story of two gay men desperately in love but torn apart by World War II. “I was always interested in World War II,” he said. “My grandfather was a glider pilot and I formed a bond with him when I was a kid.”

“I was always interested in those types of stories,” he admitted. “In 2017, I came across a BBC article about the discovery of those letters so I reached out to Mark, the person that owned them. He is a small-town museum curator and he had a number of Hollywood people reach out to him but he didn’t want to share those letters via e-mail. I decided to get on a plane and I went and visited him and his family. I had been trying to make something with those letters, so I wanted to make my own short film and tell their stories.”

“My journey with Gilbert and Gordon began as so many things these days now begin-while scrolling on the Internet,” Vallentine said. “Thinking back, the improbability of the whole thing is stunning. A gay love affair interrupted by world war two, complete with detailed love letters that somehow managed to survive decades only to be discovered and shared with the world.”

The director continued, “I will never forget the thrill I felt learning about this remarkable story. Later, after I reached out to Mark, the historian who discovered and shared the letters, I would learn that I was one of many interested parties who wished to shepherd this special story to a wider audience. But I would not be intimidated by this. When given the chance, I flew to the tiny town of Oswestry, England to meet with Mark personally and plead my case.”

“As you can probably guess, my passion and persuasiveness won me the right to help tell Gilbert and Gordon’s story. I cannot adequately express the tremendous privilege it has been to be the caretaker of this beautiful story. Between multiple trips to England to read the actual letters and research the real places mentioned in them and the idle time I have sat with Gordon’s words, wondering about what is known and what was lost to the past, I can say that this story has changed my life in profound ways,” he elaborated.

Vallentine remarked, “Adapting a story is challenging under the best circumstances, but I feel a particularly strong sense of duty to ensure that I am representing their story and words with integrity. In the process of finding the most compelling way to tell this story, I have thought about what it means to tell underrepresented stories and to be inclusive in creating art. I’ve come to realize that telling diverse stories is the reason I do what I do.”

“Storytelling is a powerful tool that can change hearts and minds and I am conscious of my duty to Gilbert and Gordon and all LGBTQ+ people who may recognize something of themselves in this story,” he acknowledged.

“Telling this story also had an enormous impact on how I think about representing diversity behind the camera as well. I could not have known when I first came across that BBC article how the trajectory of my life would be altered. But I am beyond grateful that I was able to make this short film and I am tremendously proud of what my incredibly talented team and I were able to bring to life,” he added.

Vallentine noted that working with lead actors Matthew Postlethwaite and Garrett Clayton was a “great experience.” “Matthew and I had connected about the letters previously and I wanted him to be in it,” he said. “Garrett was also wonderful to work with, he is a friend of a friend. I knew Garrett would be able to give a compelling performance for our short.”

The trailer for “The Letter Men” may be seen below.

Vallentine is considered one of the premier up-and-coming directors in Los Angeles, California. He draws his creative inspiration from the forged-in-fire experience of being a dyslexic gay kid in small-town Michigan. What was once his shame he now considers his greatest strength.

He is currently in post-production for his first feature film “The Mattachine Family,” written by creative partner and husband Danny Vallentine. This film is being produced by Zach Braff (“Garden State”), Scot Boland (“Lord of the Rings”), and Mike Diaz. The film stars Nico Tortorella (“Younger”), Juan Pablo Di Pace (“Fuller House”), Emily Hampshire (“Schitt’s Creek”), and Emmy Nominated Carl Clemmons-Hopkins (HBO’s “Hacks”). “I am working on post-production for my feature film ‘The Mattachine Family,’ it’s a really beautiful film,” he said.

“It’s about a gay couple’s journey into fatherhood,” he added. “Then, we will submit it to some festivals and we will go from there. Garrett Clayton and Matthew Postlethwaite are in this one as well, where they have featured spots in it.”

Vallentine has developed content with Amy Baer at Gidden Media, Tyra Banks with Bankable, and most recently has been hard at work developing a WWII series based on the newly discovered real love letters sent between two gay British soldiers in the 1940s. He is working to bring this remarkable true story to life with Brian Volk-Weiss at the Nacelle Company.

He has worked with recording artists like Charlie Puth and Tritonal and popular media personalities like Patrick Starrr and Joey Graceffa. He has created commercials and branded content for Mercedes-Benz, MAC Cosmetics, Sephora, The Department of Veterans Affairs, The Ad Council, Goodwill, and Major League Baseball. Andy’s combined content has been viewed over one billion times.

On being a filmmaker in the digital age, Vallentine said, “It’s great. It has been very interesting, I grew up creating YouTube content for big influencers. I am excited to be able to share ‘The Letter Men’ online and hopefully, we can turn this into something bigger. We hope Netflix will knock on the door at some point in the future.”

On his definition of the word success, Vallentine said, “My goal in life was to make a movie, so I have completed my dream. Anything that comes after that is icing on the cake. ‘The Letter Men’ will be playing in Tribeca, which is one of the top festivals, and hopefully, it will play in more festivals.”

For viewers and fans, he concluded about “The Letter Men,” “What Gilbert and Gordon wrote about back then is still applicable today. There are still lots of struggles for LGBTQ people. It is great that we have come so far but we still have more to go. They were writing about similar injustices back in World War II.”