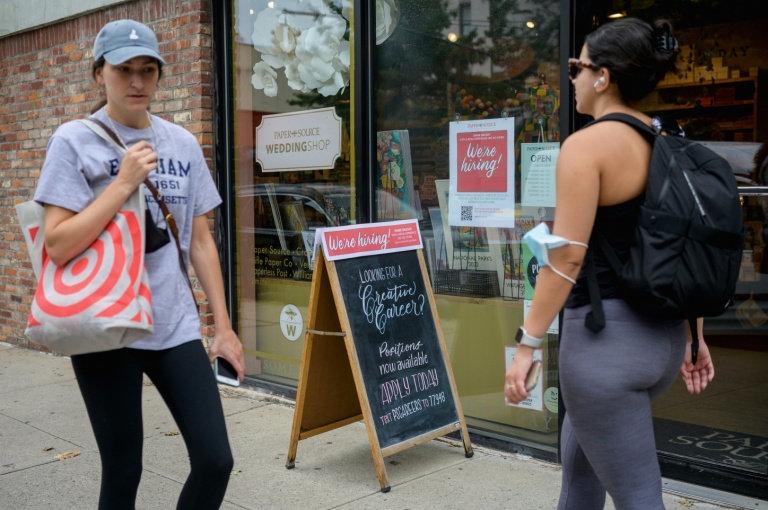 The US labor market has almost recovered from the mass joblessness caused by the pandemic, adding hundreds of thousands of positions last month and sending the unemployment rate nearly to where it was before Covid-19 broke out nationwide.

The Labor Department reported Friday that the unemployment rate fell more than analysts forecast in March to 3.6 percent, a hair above its February 2020 level of 3.5 percent, while the economy added 431,000 jobs in the month.

Though the hiring total was slightly below analysts’ forecasts, it was nonetheless a strong figure that underscored how far the economy has come since the pandemic started two years ago.

“This is a historic recovery — Americans are back at work,” President Joe Biden tweeted, as his administration grapples with low approval ratings driven in part by inflation that has hit record levels under his presidency even as employment has improved.

Analysts said they doubted that the robust pace of hiring could be maintained.

“Today’s job report is great news as it means the economy has almost fully recovered from the blow caused by the pandemic,” Mark Zandi of Moody’s Analytics wrote on Twitter.

“But it is somewhat disquieting in that the job market must cool off quickly, or inflation, our number one economic problem, will soon be a much bigger one.”

The data was released as the Federal Reserve is undergoing the delicate process of fighting the price increases by raising interest rates from the zero level they held them at when the pandemic was at its worst, while simultaneously trying not to harm the recovery.

Ian Shepherdson of Pantheon Macroeconomics said the data contains signs that wage growth — a driver of the price increases — is moderating, while workforce participation is increasing, trends that could convince the Fed to be less aggressive in tightening policy.

“Rates still need to rise substantially, but the Fed won’t need to go overboard this year if the labor market is normalizing,” he said.

The latest report showed key markers of labor market health had made a full recovery after the catastrophe brought on by the pandemic, which cost more than 20 million people their jobs and sent the unemployment rate up to 14.7 percent in April 2020.

Last month, the number of unemployed people fell to six million, just above its 5.7 million level before the pandemic, while the number of people whose employment ended involuntarily or who completed a temporary job came in at 1.4 million, also close to where it was in February 2020.

The Labor Department also revised upwards the healthy jobs gains reported in January and February, saying they were a combined 95,000 higher than first reported.

A wide range of industries hired last month, including leisure and hospitality, the sector encompassing the bars and restaurants hit hardest by the pandemic’s layoffs.

The labor force participation rate, indicating the share of people employed or looking for work, ticked up slightly to 62.4 percent, a post-pandemic high but still a percentage point below February 2020.

Nonetheless, there was still ground to be recovered. The number of employed people was still 1.6 million short of its pre-pandemic level, the data said, while employment in leisure and hospitality is 1.5 million jobs lower than before the pandemic.

The recovery was also not being felt equally, with unemployment for white workers hitting 3.2 percent in March, but coming in at 6.2 percent for Black Americans and 4.2 percent for Hispanic workers, though the rates for each group decreased from the month prior.

Economists viewed the data as reinforcing the Fed’s committment to raise interest rates by half a percentage point at its meeting next month, double the hike it announced when it began hiking in March.

“Looking ahead, we expect job creation will settle into a slower but still healthy pace later this year as the economy feels the pinch from soaring inflation and tighter financial conditions,” Kathy Bostjancic of Oxford Economics said.

In this article:Economy, Employment, indicator, US