Zimbabwe’s President Robert Mugabe declared many rural areas of the country to be in a “state of disaster” on Friday, as a severe drought brought on by the El Nino weather phenomenon has severely impacted the nation once known as the breadbasket of Africa.

This El Nino has ended up being the most significant and largest of its kind in over 20 years, says News.com.au. The warmer sea temperatures in the Southern Pacific Ocean have been sucking warm, moist air over North America while leaving Australia and southern Africa hot and very dry. 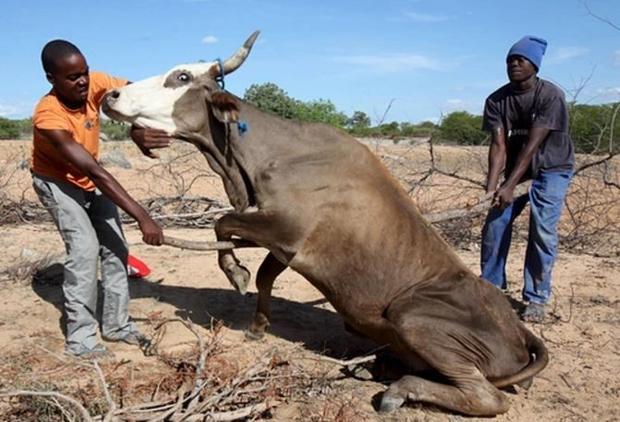 In Zimbabwe, humans and livestock are starving.
HEBREW AHMAWAN2

A regional drought in South Africa, Malawi and Zambia as well as Zimbabwe, has been made worse by the weather phenomenon, leaving tens of thousands of cattle dead, reservoirs depleted and riverbeds and irrigation ditches dry. There are no crops and many people have not had a real meal in weeks.

With a population nearing 13 million people, Zimbabwe’s Public Works Minister, Saviour Kasukuwere, said on Friday that food insecurity now affects 26 percent of the population, over 2.4 million people. There is the very real fear that the numbers could go much higher and spill over into next year, reported Digital Journal on Friday.

Zimbabwe’s problems are not new
Questionable government practices may have brought on Zimbabwe’s present crisis. While President Mugabe is blaming low farm yields on erratic rains brought on by El Nino, and sanctions imposed by Western countries because of Zimbabwe’s poor human rights record, the crisis the country is in today didn’t happen overnight.

Yes, Zimbabwe was once called the breadbasket of Africa. However, after the country gained its independence from Britain in 1980, the country began its slide downward to its present state today. Robert Mugabe was a part of that decline. 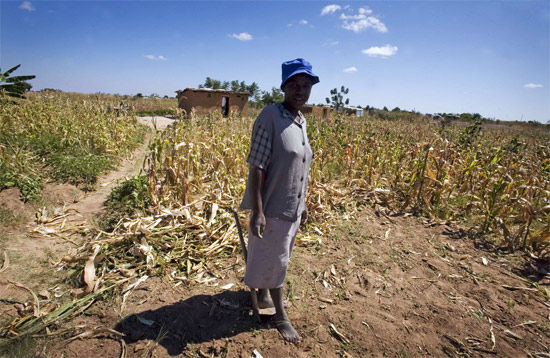 A woman stands outside of her temporary home and dried up maize crop in Epworth, in Harare, Zimbabwe
IRIN Photos

In 2000, Mugabe initiated a land reform program that resulted in vast farms being taken from white landowners and redistributed to black Zimbabweans who had previously been landless. The rich, fertile farmlands suffered under a lack of agricultural know-how and production declined.

Added to the decline in crop production was the intermittent droughts that affect this region of Africa. With droughts came unemployment and poverty. Mugabe’s government is partly to blame in all this. Mugabe runs the country with an iron fist, invoking fear and mistrust as well as violence. Thousands have been killed under his rule.

Now the country is cash-strapped and in severe economic decline and poverty is endemic. There is the real possibility that over two million people will end up starving to death, even while the government is saying it will take measures to minimize the impact of the drought on both humans and livestock.

In this article:breadbasket of africa, declining economy, El Nino, state of disaster, Zimbabwe