According to the National Weather Service, the smoke is getting caught up around a section of high atmospheric pressure over the Great Basin, then getting caught in winds and flowing east of the Rocky Mountains via the Jet Stream, according to Gizmodo Earther.

Actually, the pollution has moved to the East in two large gusts – with one moving across the upper western U.S. to the Great Lakes and over toward central New York – while the other has been pulled southwest through Missouri, Illinois and Kentucky, according to the National Oceanic and Atmospheric Administration. 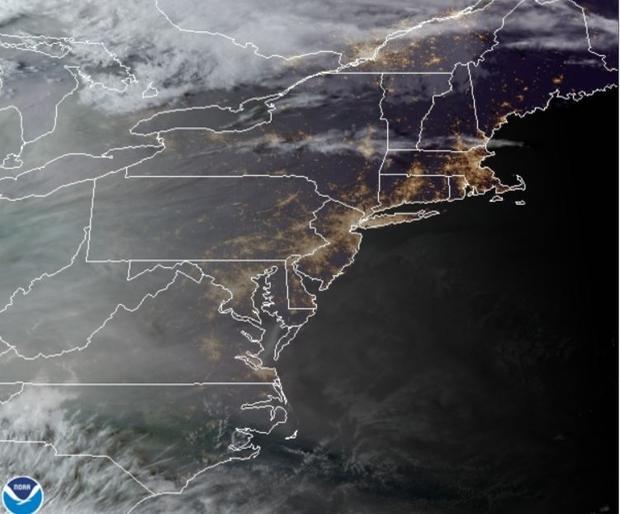 Wildfire smoke on the Easdt Coast of U.S. as seen from the GOES 16 satellite on September 15, 2020.
GOES 16 satellite imagery
Besides burning millions of acres on the U.S. West Coast, thousands of homes and businesses have been lost and 36 people have died in the fires, with dozens of people still missing. The smoke from the fires has filled the air with harmful levels of pollutants, creating a health crisis.

The intensity of the blazes has also bathed the skies over Washington, Oregon and California in an eerie orange-red glow, reminiscent of a scene out of a sci-fi movie.

Notice that hazy, milky sky this morning? That is a result of smoke (well above our heads) from wildfires across the Western US. Notice that the smoke originates across the west and then gets pulled to the east due to the jet stream aloft. The haziness may increase later today. wBOQHfpcmM


And yes, the smoke has really traveled across the U.S. The Wakefield, Virginia Office of the NWS tweeted an image earlier today showing the sky in Virginia, where this journalist lives.

Smoke made it all the way to Wakefield this morning. Thoughts are with all the folks out west NWSWakefieldVA ZhLYXIrbJg


The plumes of smoke have traveled as far as Toronto and Ottawa, as well as to the northeast, covering Alberta, according to CBC Canada Check out the tweet from Blainville, QC.


Cadboro Bay is a bay near the southern tip of Vancouver Island in British Columbia, Canada. BC has been impacted very hard by the smoke drifting across the border from neighboring Washington.

The layers of the sun through the wild fire smoke in Lewes, Delaware! lTygPrvWTW


This is a good time to remind people that the smoke from wildfires contains toxins and particulate matter that can get into the lungs. So a mask is advisable, especially if one has any respiratory problems.

Advertisement. Scroll to continue reading.
In this article:east coast of us, five provinces in canada, jet stream, smoke from wildfires, West coast, Wildfires