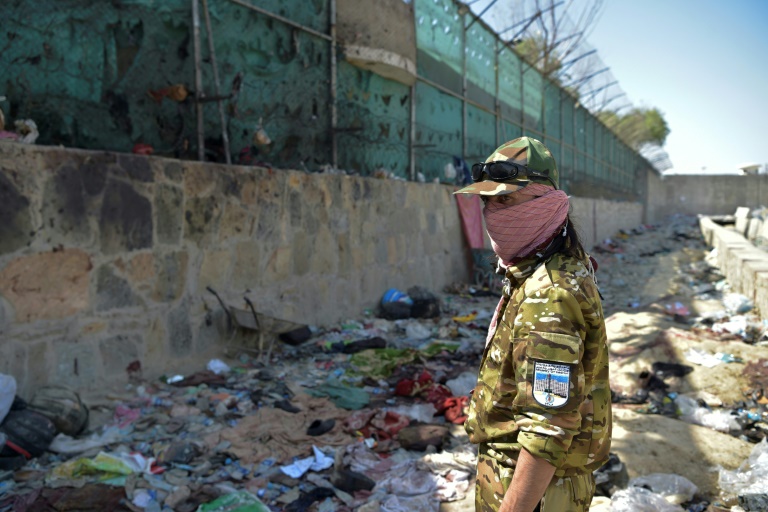 The blast claimed by the Islamic State jihadist group targeted US forces, but hit hardest the mass of people who had converged on the airport in a desperate bid to escape the Taliban’s feared hardline rule.

At least 72 civilians and 13 American troops were killed, according to various authorities, in an attack that came after a chorus of warnings of an imminent threat to the US-led evacuation effort, with the clock ticking towards an August 31 deadline.

“We certainly are prepared and would expect future attempts, absolutely,” he said.

The Pentagon also clarified that there was one explosion on Thursday, and not two as previously believed.

At the White House, President Joe Biden’s press secretary Jen Psaki said the country’s national security experts have said another attack is “likely” and the next few days will be “the most dangerous period to date”.

There are more than 5,000 people inside the airport left to evacuate, US General Hank Taylor said, stressing that airlifts would continue “until the last moment”.

Determined to end two decades of war in Afghanistan, Biden has insisted that he would stick to his August 31 deadline to end the airlift.

“We will complete the mission,” Biden said Friday.

The veteran Democrat, who has come under enormous criticism at home and abroad for his handling of the Afghan crisis and the US military withdrawal, has pledged to punish those responsible for Thursday’s blast.

About 105,000 people have been flown out of the country since August 14, the day before the Taliban swept to power, according to the US government.

Some Western allies, including Britain and Spain, announced an end to their airlifts on Friday, following other nations such as Canada and Australia earlier in the week.

Many have repeatedly warned that it will be impossible to get all at-risk Afghans out by Tuesday.

Some evacuation flights left early Friday, with queues of people seen lining up on the tarmac, but there were no more crowds near the site of the blast, according to AFP reporters.

The Taliban had also blocked off the main routes to the airport as well as side roads.

The United Nations said Friday it was bracing for a “worst-case scenario” of up to half a million more refugees from Afghanistan by the end of 2021.

The Taliban have promised a softer brand of rule compared with their first stint in power from 1996 to 2001, which ended when the United States invaded Afghanistan following the September 11 attacks.

But many Afghans fear a repeat of their brutal interpretation of Islamic law, as well as violent retribution for working with foreign militaries, Western missions or the previous US-backed government.

The role that women will be allowed to play in society has been one of the biggest concerns since the Taliban takeover, after women were banned from work and education and confined to the house during the group’s rule in the 1990s.

“They can work, they can study, they can take part in politics and they can do business,” he told a press conference.

Stanikzai blamed the United States for the deadly chaos outside the airport gates.

“This trouble, created by the Americans, caused difficulties for a number of our countrymen and caused the loss of human lives,” he said.

He underlined that Afghans with the right visas will be legally allowed to travel after the formation of a government, including those who worked for the Americans.

The Taliban have allowed US-led forces to conduct the airlift while they finalise plans for their government to be announced as soon as the American troops have left.

But the Islamic State jihadists, bloody rivals of the Taliban with a record of barbaric attacks, were intent on capitalising on the chaos in Kabul.

In recent years, the Islamic State’s Afghanistan-Pakistan chapter has been responsible for some of the deadliest attacks in those countries.

It has massacred civilians at mosques, shrines, public squares and even hospitals.

“These are people that are even more extreme than the Taliban and are basically at war with the Taliban,” Australian Defence Minister Peter Dutton said.

The Italian NGO Emergency said the hospital it operates in Kabul had been overwhelmed by more than 60 casualties, 16 of whom were pronounced dead on arrival.

The injured “could not speak, many were terrified, their eyes totally lost in emptiness, their gaze blank”, the hospital’s medical coordinator Alberto Zanin said on Twitter.

The attacks led to the worst single-day death toll for the US military in Afghanistan since 2011.

A clearly shaken Biden went before TV cameras to address the American people, describing the killed US troops as heroes.