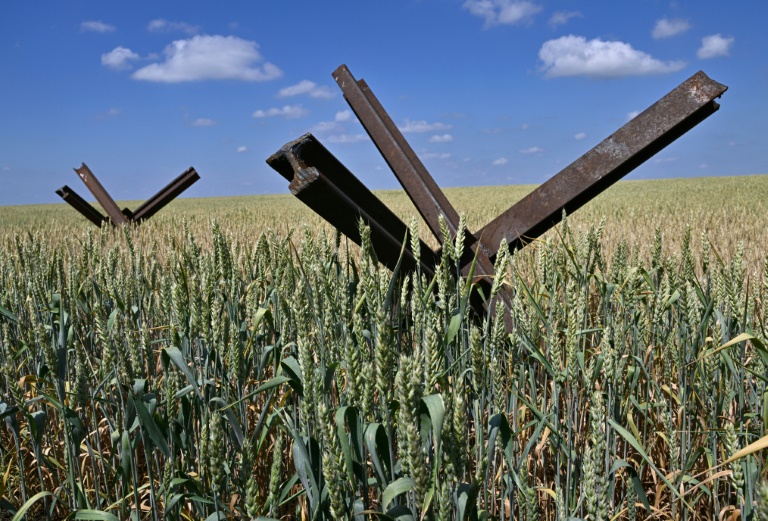 Nadiia Ivanova should have been harvesting her crop soon. But so far on her farm in southern Ukraine, she has only managed to collect bombshells.

“We planted really late because we needed to clear everything beforehand,” the 42-year-old told AFP, standing in the middle of a field in a zebra print dress.

Russian troops bombarded her 4,000-hectare (9,900-acre) farm near the town of Mykolaiv as they tried to advance northwards in March.

They only passed through, and the front has since retreated around 20 kilometres (12 miles).

Though the soldiers took some tools and left the odd crater, it seemed the only victims were a pair of barnyard peacocks killed in the fighting.

But lasting damage was done.

As the blockage of Ukrainian grain stokes fears of a global food crisis, the obstacles are piling up for Ivanova, who employs 76 people.

In peacetime, the farm’s produce — more than 12,000 tonnes per year — would have been destined for the domestic market and for export to Europe, Africa and China.

Today, its warehouses hold 2,000 tonnes of last season’s grain. There are no takers.

The railways have been partially destroyed by the Russian army, any ship that sails faces the threat of being sunk, and the port of Mykolaiv has been targeted by missiles.

Other options have not come through fast enough. As a result, the price of grain per tonne has plummeted to $100 from more than three times that before the war.

Back on the farm, the grain cleaning machine won’t start. It’s not easy getting help from banks and insurance companies while the fighting rages so close by.

And few cleaning machine specialists want to work under the threat of bombs, which could fall at any moment.

With his hands stuffed into the bowels of a gleaming 300,000-euro ($315,000) combine, Serhii Chernyshov, 47, is worried. The machine has never been used and it’s already out of action.

“I’ll need another week to see if I can get it working again,” he said.

On top of this, the cost of fertilisers and pesticides are soaring. Fuel oil, when it’s in stock, has tripled in price.

Drought is expected to wreak havoc again this year, and the ears of wheat are stunted.

But Ivanova carries on at all costs. Not bringing in the harvest runs the risk of starting a fire — a danger multiplied by the fighting.

She set up the farm in 2003 with her brother and parents on a former “kolkhoz”, a collective farm that used to supply the Soviet Union.

Now, she’s making changes to cope with the crisis caused by Russia’s invasion.

“We replaced the mustard, an early crop, with sunflowers and millet, which come later,” she said.

Sitting on a red tractor, one of the few still running, Oleksandr Khomenko is weeding a plot ready for sowing.

“Fear or no fear, we have to go (to work): I have a family to feed,” the 38-year-old said, missiles whistling in the distance.

Most of Ivanova’s employees continue to work on the farm and receive their pay.

“I don’t know how long I’ll last,” she said. “But at least there will always be food at my place.