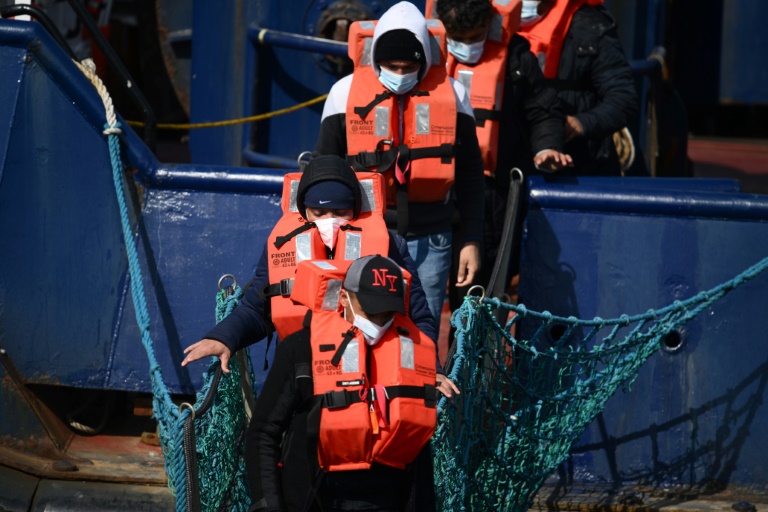 A British judge on Friday rejected an emergency bid to block deportation flights of asylum-seekers to Rwanda set to start next week under an agreement with the east African country, ruling politicians must manage immigration policy.

The UK government intends to fly the first planeload of claimants to Rwanda on June 14, after agreeing the plan with Kigali in a bid to deter illegal migrants from undertaking perilous crossings of the Channel by boat.

Refugee rights groups and a trade union representing UK Border Force personnel challenged the plan in London’s High Court, seeking an injunction against Tuesday’s inaugural flight and any beyond then.

They argue that the plan violates asylum seekers’ human rights, and say the government cannot justify its claim that Rwanda is a safe destination.

But delivering his decision after a one-day hearing, judge Jonathan Swift said it was in the “public interest” for Interior Minister Priti Patel “to be able to implement immigration control decisions”.

However, Swift gave permission for his ruling to be appealed, suggesting Court of Appeal judges would hear the case on Monday, whilst also setting the date for a fuller two-day High Court hearing next month.

The rights groups bidding to block the policy said they were “disappointed” with the decision.

“It is extremely worrying that despite these legal challenges and widespread concern, the government remain determined to press ahead with the removal of people to Rwanda as soon as next week,” Enver Soloman, chief executive of the Refugee Council, said.

Noting the numbers of migrants crossing the Channel had risen since the policy was unveiled earlier this year, he urged ministers to “reflect on the initial failures of this plan, and rethink”.

Earlier, the UN refugee agency had accused the British government of dishonesty over its plan, after lawyers for the claimants said that Patel’s interior ministry had claimed the United Nations High Commissioner for Refugees (UNHCR) endorsed it.

The UN agency’s lawyer Laura Dubinsky said it “in no way endorses the UK-Rwandan arrangement”.

“UNHCR is not involved in the UK-Rwanda arrangement, despite assertions to the contrary made by the secretary of state,” she told the court.

Dubinsky said the would-be refugees were at risk of “serious, irreparable harm” if sent to Rwanda, and that the UN had “serious concerns about Rwandan capacity”.

The UNHCR’s concerns include a lack of legal redress in Rwanda and potential discrimination against gay claimants.

“These are concerns that have been communicated to the UK authorities and yet the secretary of state’s position… is that the UNHCR has given this plan a green light,” the claimants’ lawyer Raza Husain said.

“That is a false claim.”

Lawyers for the ministry later addressed the court, which heard there were 31 people expected to be on Tuesday’s scheduled flight.

“The Home Office does intend to make arrangements for a further flight or flights to Rwanda this year,” its lawyer Mathew Gullick said.

He urged the judge to consider the impact of blocking the flights, noting “even a pause of six weeks creates a period of time in which people may rush to cross (the Channel)”.

“There are potentially hundreds of people who can cross in a single day,” he added.

The plan remained “the right approach, not least to tackle the criminal gangs who exploit migrants on the coast of France and quite often force them into unseaworthy vessels to make what is an incredibly dangerous crossing to the UK”, he said.

More than 10,000 migrants have made the journey so far this year, a huge increase on prior years. The one-way flights are intended to deter others from entering Britain by illegal routes, and offer those who do try a new life in Rwanda instead.