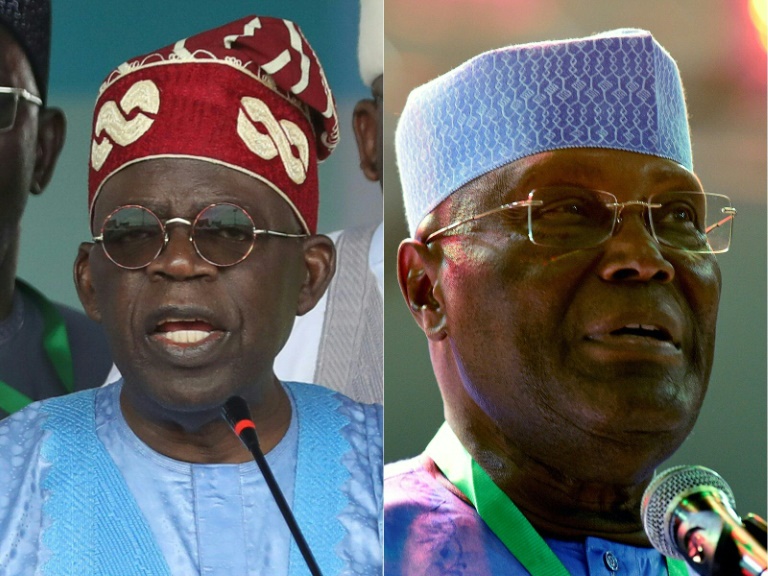 Two wealthy, Muslim, septuagenarian political warhorses who both shook off corruption scandals, Tinubu and Abubakar have much in common.

Now they face off in the February election after winning their primaries.

Tinubu, 70, is a former Lagos governor nicknamed the “Godfather” for his clout.

Abubakar, 75, is a tycoon and former vice president who as champion of the Peoples Democratic Party (PDP) is on his sixth bid to govern Africa’s most populous nation.

Initial battle lines are drawn to replace President Muhammadu Buhari, who steps down after the two terms allowed in the constitution.

But eight months from the vote, analysts say the campaign risks sliding into a race between south and north in a polarised Nigeria struggling with insecurity and economic woes, from high inflation to weak oil output.

Campaigning may become divisive with a longer-than-usual run-up to the February 25 vote — in past elections, candidates were announced shortly before the ballot.

Seen as longtime fixtures of Nigeria’s politics, both men may struggle to win over a youthful population disenchanted with the country’s business-as-usual, money-driven politics.

A key part of campaigning, experts say, will be Nigeria’s “zoning,” an unwritten deal calling for the presidency to alternate between south and north. After two terms with northern Muslim Buhari, many expect a southern president.

That accord — and a tradition of candidates choosing running mates from a different religion and region — is seen as a balance in a country almost equally split between a mostly Christian south and predominantly Muslim north.

Tinubu and Abubakar this week must select vice presidents who will signal how they plan to balance their appeal to voters across the north, southwest and southeast.

“This election will effectively be viewed by voters as a contest between the north and south, overshadowing economic and security developments.”

Tinubu, as a southern Muslim, is likely to benefit from the All Progressives Congress (APC) party structure and has a strong power base in southwest which he built up after being governor of Lagos.

He also has support from a powerful alliance of northern governors, who are looking for a say in his choice of a vice president. But he faces serious hurdles.

In the buildup to the primaries, the APC — originally a coalition of smaller parties that came together to elect Buhari in 2015 — had to overcome major internal splits.

Tinubu won the candidacy without the open support of Buhari, and his presidential bid may exacerbate party tensions as he clashes with Buhari loyalists, said SBM Intelligence analyst Ikemesit Effiong.

“Tinubu securing the nomination is the first salvo in a lot of political machinations that will unfold,” he said. “Both at a party level, in terms of how the PDP and APC dynamic shapes up, but also internally with the APC.”

His choice of vice president will be key. As a Muslim from the south, he has fewer options for selecting a high-profile Christian running mate from the north.

Winning the northern regions, where voter numbers and rates were higher in 2019, is vital. The PDP broke with “zoning” to choose northern Muslim Abubakar as its candidate.

For his own choice, Abubakar has a wider selection of southern Christian politicians, including a former rival in the primaries, Rivers State governor Nyesom Wike, a powerful PDP influence.

Both men will vow to tackle insecurity as Nigeria fights a jihadist insurgency in the northeast, heavily armed kidnap gangs in the northwest and low-intensity separatist agitation in the southeast.

Handling the economy will also be key — food and fuel prices are rising with the war in Ukraine affecting wheat and energy supplies to the continent.

The World Bank estimates one million more Nigerians will likely be pushed into poverty before the end of the year because of the Ukraine crisis.

But the long build-up to the February ballot allows Abubakar a chance to paint Tinubu as linked directly to Buhari’s failures as economic woes deepen.

“There is plenty of time for any major policy, political or security failings by the current administration to be tied to Mr Tinubu’s campaign,” SBM said.

In this article:Environment, Nigeria, Politics, Vote