Sandy Hook Elementary staff told police that when they arrived for work on Tuesday morning, four “disturbing” phone messages were left on the school’s answering machine. The messages accused them of fabricating the shooting in which several students and staff members were killed on Dec. 14, 2012. 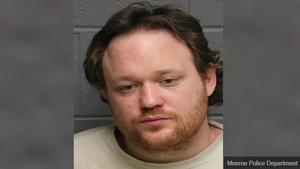 Rogalski called the school again later that morning and allegedly spoke with an administrative assistant.

In the first call, Rogalski used his father’s name and said he wanted to enroll a child.

“I just wanted to make sure that there was going to be no fake shooting on the day that I enrolled him,” court records reported Rogalski said, per WFSB. “I just wanted to clarify that he wouldn’t get shot by a fake Adam Lanza.”

At one point, he asked if Kaitlin Roig could be his teacher. She was teaching when Lanza went on the deadly rampage.

“I know I may have offended people, but they were words, and I made no threats,” Rogalski said. “I wasn’t going to do anything.

Police told WFSB that Rogalski called another time and told a secretary his daughter wouldn’t be at school that day. When the secretary asked for a name, he allegedly said Dawn Hochsprung, the name of the school principal who was killed in the massacre.

The calls were placed between 7:02 a.m. and 7:57 a.m. and Rogalski also claimed that the Boston Marathon bombings were fake, NBC Connecticut reports.

He has been charged with five counts of harassment and one count of disorderly conduct. Rogalski was also issued a misdemeanor summons charging him with harassment. 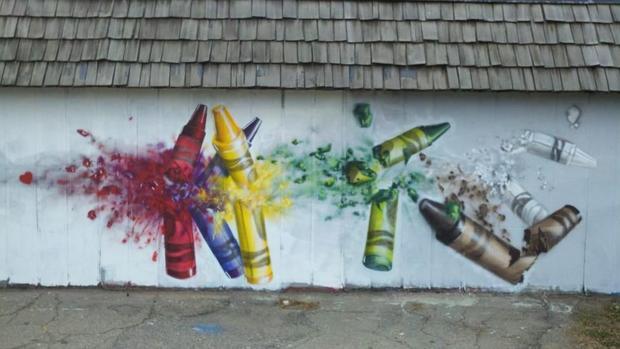 A friend of an imgur member created this Sandy Hook tribute mural.
imgur

Rogalski is only one of a handful of “truthers” who believe that Sandy Hook never happened. In one such case last May, a man who said that the shootings never occurred, swiped a vinyl peace sign installed at a playground in Mystic, Connecticut. that was dedicated to a victim of the massacre.

After stealing the sign from the Grace McDonnell playground, the man called the little girl’s mother and told her he did it because he thinks the massacre at the school was a hoax,The Raw Story reports.

Raw Story reports that Sandy Hook “truthers” think that the Newtown shooting is a hoax that never occurred, or that it’s an attempt by the government to confiscate all guns.

In another instance, the family of Victoria Soto, the brave teacher who hid students and tried to shield others when Lanza went on his murderous rampage, have been bombarded by ‘truthers’ who have set up phony social media accounts using the young woman’s name to purport their conspiracy theories, The Guardian reported, according to The Raw Story.

Soto’s family has now managed to trademark her name in the hopes that this will help to shut down unauthorized social media accounts as well as other abuse.

Rogalski has had prior arrests for marijuana possession, driving under the influence, and interfering with police, law officials said, according to NBC Connecticut.

He continually spoke out in court, against advice from his public defender, saying he knows he might have offended people but didn’t threaten anyone and only made five calls.

“I don’t think I said anything that horrible,” he said.

Rogalski is due back in court on April 22 and is being held on a $50,000 bond. He has been ordered not to go to the school or have contact with the school’s secretary,WFSB reports. The judge has also ordered a psychological exam.