By late Monday night, the flames had engulfed at least 30 building in the town of Gatlinburg as the strong winds spread burning embers that readily fed on the drought-stricken brush and trees.

The fires knocked down power lines that ignited new fires, according to authorities. “Everything was like a perfect storm,” said Cassius Cash, superintendent of the Great Smoky Mountains National Park, to CNN affiliate WATE. 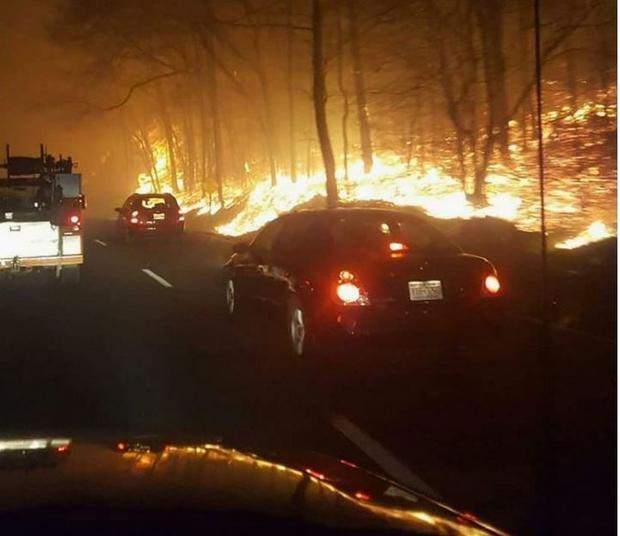 Thankfully, no deaths were reported, although one person suffered burns and another person received injuries related to an accident involving a fire truck says the Tennessee Emergency Management Agency (TEMA).

TEMA says one of the building’s impacted by the inferno included a 16-story hotel and an apartment complex that was completely consumed by the flames. Employees at Ripley’s Aquarium of the Smokies in Gatlinburg were forced to evaluate late Monday night as flames reached within 50 yards of the building.

“As long as we have fuel in our generators, that aquarium can run on its own,” DeSear said. “We need to be one of the first people allowed back in when it’s safe,” he added, saying the smoke left behind would also have an effect on the creatures.

Schools in Green, McMinn, and Sevier counties are closed today and over 12,000 people in Sevier County were without power this morning says TEMA. Some 1,300 people spent the night in evacuation shelters, many of them requiring oxygen after inhaling the thick smoke. 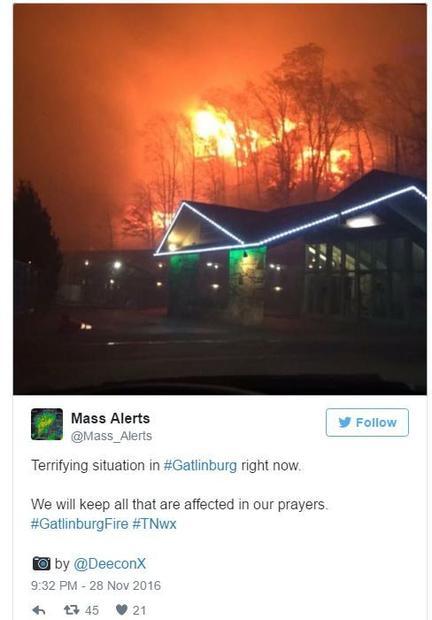 There may be some good news amidst all the doom and gloom caused by the wildfires. Rain, blessed and desperately needed has finally arrived, although it has been sporadic in some places. And while the rainfall may soak the dry brush and tinder, putting out the fires in some cases, that’s about all it will do.

According to AccuWeather, the rain deficit for the region impacted by the drought is 12-24 inches. So every little bit of rain is going to help.

So far, about 0.50 to 2 inches of rain began falling from the lower Mississippi Valley to the southern Appalachians from Monday to early Tuesday morning. A few areas received as much as three inches. A second batch of rain is expected to begin in the Gulf Coast region Tuesday night, bringing 1-2 inches of rain from the central Gulf Coast to southern New England.

As we move into early December, there is a chance of some more rain in the forecast, although the track and strength of any storms this far out are uncertain.