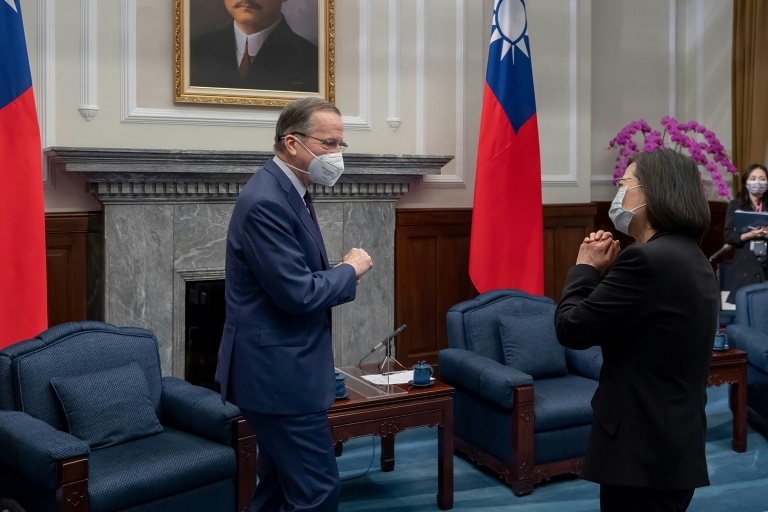 Democratic countries must not “turn a blind eye to military aggression”, Taiwan’s leader said Wednesday, warning her island faces threats similar to those confronted by Ukraine at a meeting with a delegation of former US security officials.

The delegation, led by ex-chairman of the joint chiefs of staff and retired admiral Michael Mullen, arrived in Taiwan on Tuesday at a time of rising tensions between Washington and Beijing over the self-ruled island as well as the crisis sparked by Russia’s invasion of Ukraine.

Democratic Taiwan has watched the Ukraine situation closely, as it lives under constant threat of a Chinese invasion, with Beijing claiming sovereignty over the island and vowing to seize it one day — by force if necessary.

“History teaches us that if we turn a blind eye to military aggression, we only worsen the threat to ourselves,” Taiwanese leader Tsai Ing-wen told the delegation.

“The Ukrainian people’s commitment to protect their freedom and democracy, and their fearless dedication to defending their country have been met with deep empathy from the people of Taiwan, as we too stand on the frontlines of the battle for democracy.”

She warned of Beijing’s rising military threat to Taiwan and the region, including “using cognitive warfare tactics and disinformation to divide Taiwanese society”.

China has ramped up pressure on Taiwan since the 2016 election of Tsai, who rejects its stance that the island is part of Chinese territory.

Its sabre-rattling has increased considerably over the past year, with warplanes breaching Taiwan’s air defence zone on a near-daily basis.

Last year, Taiwan recorded 969 such incursions, according to a database compiled by AFP — more than double the roughly 380 in 2020.

Just weeks before Moscow’s invasion of Ukraine, China and Russia signed a joint statement agreeing to a host of foreign policy goals, including Taiwan being “an inalienable part” of the mainland.

“Facing threats to the security of the Taiwan Strait and the region, we look forward to working even more closely with the US and other stakeholders in the region,” Tsai said.

The delegation’s visit reflects bipartisan support for a strong US-Taiwan partnership, Mullen said, adding it is aimed at reassuring regional allies that “the United States stands firm behind its commitments”.

“Maintaining peace and stability across the Taiwan Strait is not just a US interest but also a global one,” he said.

The delegation does not include current US officials but it is “in coordination with the White House and the Biden administration,” a senior official told AFP.

Last year, former senator Christopher Dodd and former deputy secretaries of state Richard Armitage and James Steinberg were asked by President Joe Biden to travel to Taipei — the first such delegation since he came to power.

In this article:China, Democracy, Politics, Taiwan, Ukraine News, US