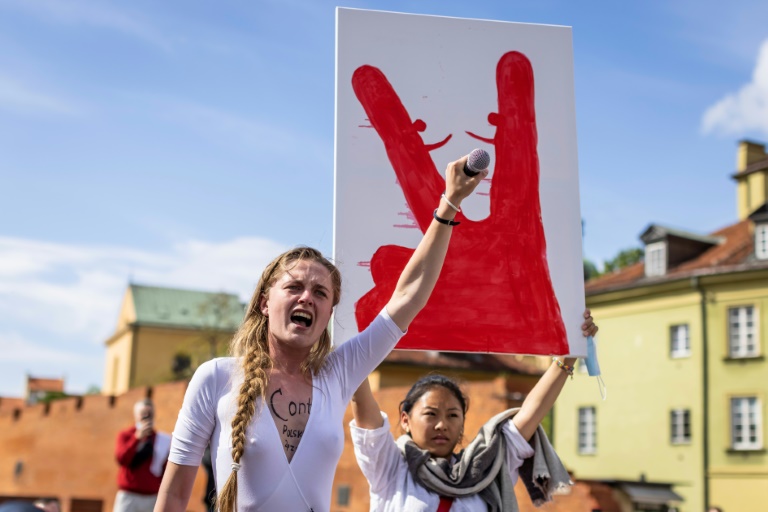 With her blood-curdling, lung-bursting screams of protest outside the European Commission office in Warsaw, 28-year-old artist Jana Shostak has become the angry face of the Belarusian opposition movement in Poland.

“It’s a scream of spite, of anger, of powerlessness over what is happening in our country,” Shostak told AFP this week after a minute bellowing out her howl of anguish at one of the near-daily protests outside the European Commission office in Warsaw.

Shostak arrived by taxi — already rallying the protesters by shouting from the car, wearing a cotton dress in the white-red-white colours used by the Belarusian opposition.

Fellow Belarusians and Polish allies have been joining the protests. Next to outdoor cafes crowded with patrons enjoying the end of lockdown, dozens of people have joined Shostak’s screams to demand the European Union take more action against Lukashenko.

Their screams are now being heard far beyond Warsaw.

The unusual form of protest has gone viral on social media, and this week Polish actor Bartosz Bielenia surprised the European Parliament by screaming for Belarus after receiving an award.

One of Shostak’s screams has proved particularly popular online.

It was on May 24 — a day after Lukashenko diverted a Ryanair flight between two EU capitals, forced it to land in Belarus and arrested a dissident journalist and his girlfriend on board.

That scream also attracted controversy in Poland because of a comment by a left-wing female parliamentarian, Anna Maria Zukowska, that appeared to criticise Shostak’s low neckline.

Asked about the furore, Shostak said: “I thought we were living in the 21st century and people can choose the gender they want, the clothes they want, express themselves the way they want.

“The fact that there was a media storm not because of the dramatic situation in Belarus but because I was not wearing a bra, and the fact that this came from a left-wing female politician, really took me aback,” she said.

She quickly turned the attention into a part of the protests, echoing Ukraine’s high-profile Femen movement known for topless protests.

She has encouraged participants to paint the logos of companies doing business in Belarus on their chests — a way of campaigning for the EU to implement economic sanctions and for individual companies to “stop supporting the regime”.

“I like this combination of screaming and nudity a lot… It is the ultimate way to protest,” said Jan Jurczyk, a 25-year-old artist with a Rolls Royce logo on his chest.

Shostak moved to Poland as a teenager to study art and she has previously campaigned for changing the word “refugee” to the word “newcomer” in Polish and for using feminatives — feminine endings on words, including occupational terms.

She travelled back to Belarus in August 2020 to vote in the presidential election and took part in some of the ensuing mass protests that accused Lukashenko of rigging the result.

When asked when she plans to stop screaming, she said: “I’m going to scream until the revolution is complete. And one day longer, just in case.”