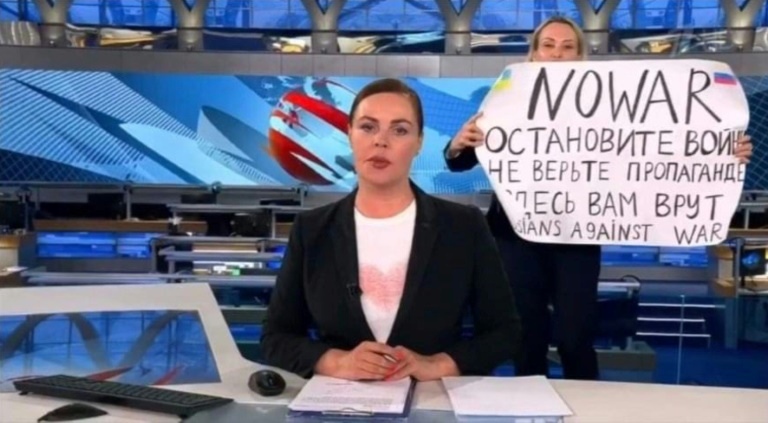 When Russian journalist Marina Ovsyannikova stormed a live TV broadcast to denounce the war in Ukraine, she expected a backlash from Russia — but not so much from the rest of the world.

Three months later, now living in exile, Ovsyannikova, 43, is afraid to return to Russia and her two children, 11 and 17, for fear of being thrown straight in jail.

But she is also facing an increasingly hostile response from Ukraine and the West, with critics accusing her of being a spy still embedded in the Russian propaganda machine.

“I’m in the middle of this information war,” Ovsyannikova told AFP in Berlin, where she is giving a speech for the Women’s Forum for the Economy and Society network.

“It’s a really very hard situation for me. I had never expected such things after my protest.”

Ovsyannikova, who was born to a Russian mother and a Ukrainian father in Odessa, was until March working as an editor at Russia’s Channel One television.

Then, in a stunt that made headlines around the world, she barged onto the set of its flagship Vremya (Time) evening news holding a hand-made poster reading “No War” in English.

It was a highly unusual event in Russia where state media is strictly controlled.

She was detained and questioned for 14 hours before being released and ordered to pay a fine of 30,000 rubles ($280).

But under draconian new laws she could face further prosecution, risking years in prison.

The case drew international attention and raised alarm over press freedom in Russia in the wake of President Vladimir Putin’s decision to send troops into Ukraine.

In the immediate aftermath of her protest, Ovsyannikova was hailed as a hero by the West and even landed herself a new job as a freelance correspondent for Germany’s Die Welt newspaper.

But a spokeswoman for Die Welt told AFP that Ovsyannikova is no longer working for the newspaper.

The arrangement “simply did not fit in terms of concrete collaboration and daily work processes, which were also new for both sides”, according to editorial sources.

In early June, Ovsyannikova travelled to Ukraine with the intention of reporting on the war for Russian media.

“Russians are living now in an absolute vacuum. They don’t have true information because every independent media in Russia is blocked now, (there is) only information from Kremlin side.”

But she was met with a wave of hostility from critics who suspect her of still secretly working for Russia.

“Ukrainians do not trust in her sudden change of heart,” Ukrainian journalist Olga Tokariuk, a non-resident fellow at the Center for European Policy Analysis, wrote on Twitter.

She dismissed Ovsyannikova’s social media posts from the front line as “manipulative, incorrect and patronising”.

Ovsyannikova spent a large part of her childhood in Grozny, the capital of the breakaway province of Chechnya.

“When I was a child, my house was destroyed in Grozny. So I feel I understand what Ukrainian women and children are feeling now,” she says.

“Maybe it will take a few months for people from Ukraine to start to understand (that there are also) good Russian people who protest against the war.”

As for her own future, she is looking for a new job — but for now, going back to Russia is out of the question.

“My friends say to me, would you prefer poison, a car crash?” she jokes — and then, noticing the shocked faces around the room: “Without humour in my situation I think it’s impossible to live.”