Storebrand, a sustainable investment manager with $68 billion in assets announced on March 1, 2017, it had sold off $34.8 million in shares in Phillips 66, Marathon Petroleum Corporation, and Enbridge. The companies are tied to the Dakota Access Pipeline project.

The Guardian is reporting that Matthew Smith, the head of Storebrand’s sustainability team, said, “We hope that our actions and the actions of other like-minded investors in either divesting or calling for an alternative [pipeline] route will make some sort of an impact.” 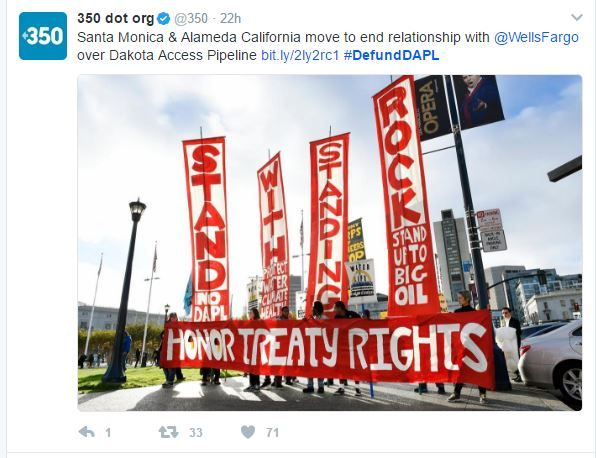 Even though President Donald Trump is behind the pipeline being finished, ordering the Army Corps of Engineers to move forward in approving its construction, protests against the DAPL has gone on, but in a way that activists are hoping will hurt Energy Transfer Partners financially. Activists are focusing on banks and investors.

At the end of 2016, Norway’s Bank DNB announced that it has sold its assets in the Dakota Access pipeline. The news follows the delivery of 120,000 signatures gathered by SumOfUs.org to DNB by Greenpeace Norway and others urging the bank and other financial institutions to pull finances for the project. The Norwegian mutual fund Odin Fund Management, also sold their shares in companies tied to the pipeline in November 2016.

The move by Bank DNB followed a Digital Journal story in November that reported the banking institution was considering pulling its financing of the pipeline project if concerns raised by native American tribes against its construction were not dealt with. DNB’s financing amounted to 10 percent of the total funding. 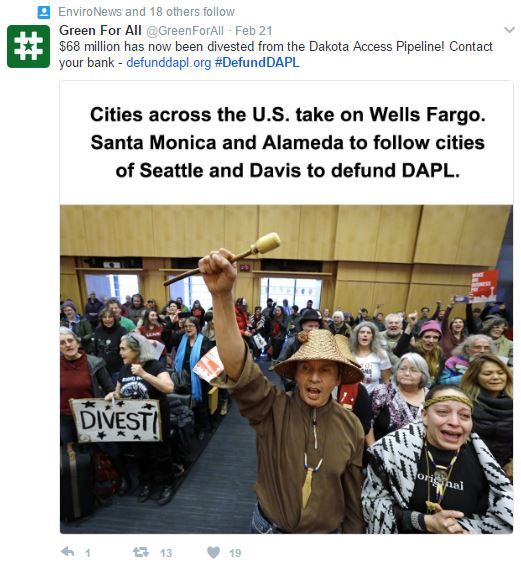 #Defund DAPL campaign growing
After creating a worldwide movement with the #No DAPL and #Standing with Standing Rock campaigns, people around the globe were drawn into the protests against the pipeline. But now that the pipeline is being completed, organizers are now focusing on stopping the funding behind the project.

A new campaign using the slogan Defund DAPL has been started and its website already has reached over 600,000 people around the world. The organizers are encouraging people to write letters to the banks involved in funding the pipeline and hold demonstrations, and if anyone needs assistance in getting started, the site is very helpful. 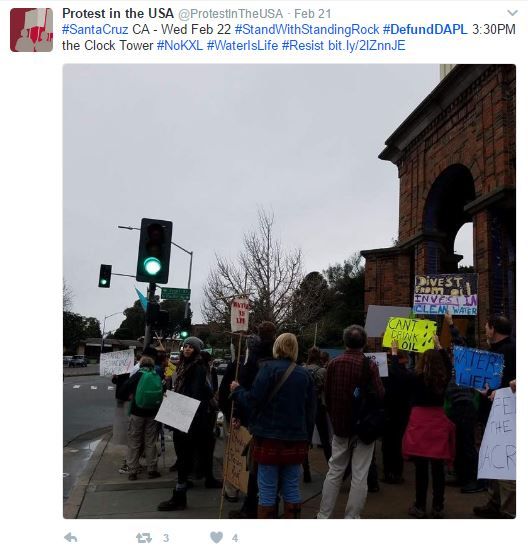 Wells Fargo Bank, one of the pipeline investors, was hit hard after customers began closing checking and savings accounts earlier this year. And the cities of Seattle, Washington, and Davis, California fully divested their funds from Wells Fargo. The latest effort at stopping funding was held this week at a San Francisco Board of Supervisors meeting,

Activist Jackie Fields helped lead a protest to persuade the board to divest fully from banks involved with the DAPL. “We asked that they change their bank from Bank of America to someone else, and to switch that $10 billion to somewhere else that’s not at all involved with the Dakota Access Pipeline,” Fields told the San Francisco Weekly.