In an emergency response to the heavy smog in Delhi, Chief Minister Arvind Kejriwal, saying the air “resembled a gas chamber,” mandated on Saturday that schools be shut and all construction projects be halted for five days, reports the Guardian.

But the public has finally awakened to the dangers of air pollution, using the hashtags #DelhiSmog and #DelhiChokes, to voice their concerns over the toxic and heavy blanket of smog covering the city. 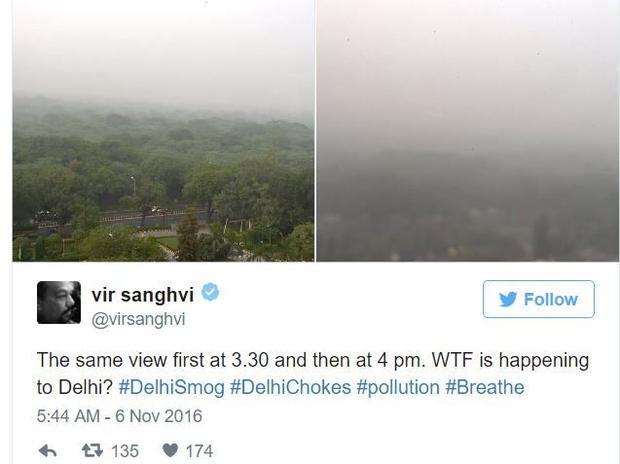 Twitter #DelhiSmog
One resident, Rizowana Hussaini, took a “smog selfie” and added the caption: “This is not the landscape of some dystopian fiction of a far-off future that a movie director has constructed. This is it. We’ve officially reached the point where we’ve turned the ONE most basic biological need—the very air we breathe—into poison.”

“It’s been a nightmare,” said Delhi resident Tara Chowdhry to Reuters on Tuesday, according to Common Dreams. “My toddler and I woke up from a nap coughing as if pepper had been sprinkled on our throats.” 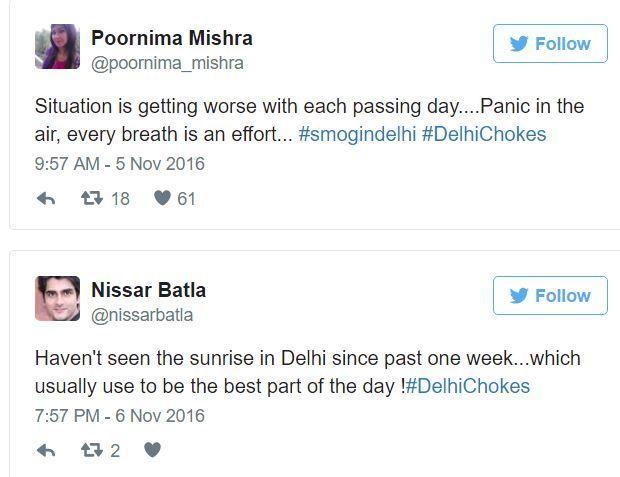 Twitter #DelhiSmog
CNN put some numbers on the problem, reporting that Air Quality Index (AQI) measurements at the U.S. Embassy in Delhi hit 999 on Monday, off the standard chart, which finishes at the “hazardous” level of 500. In comparison, China’s most polluted city, Baoding, registered an AQI reading of 298.

It is not just Delhi suffering under a blanket of smog. Many other cities in northern India are also suffering. The Hindustan Times is reporting that Central Pollution Control Board (CPCB) data shows that the increase in particulate matter in Indian cities is higher than that of many metropolitan cities around the world. 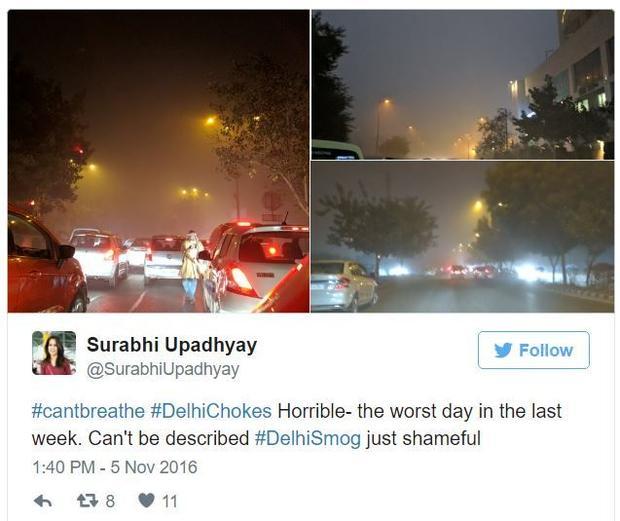 Twitter #DelhiSmog
Advertisement. Scroll to continue reading.
CPCB has done an analysis of air quality data from 2002 50 2014, and their study shows that the AQI in a number of Indian cities has deteriorated in the past decade, the AQI reaching dangerous levels in many of them being blamed on rapidly industrialising cities

But there is another reason for this past week’s heavy blanket of smog. Farmers in India’s northern plains have been burning their fields, and along with the number of firecrackers that were set off during the celebration of the Diwali festival, this is being blamed for the polluted air.