The National Oceanic and Atmospheric Administration’s (NOAA) October State of the Climate report shows that global temperatures for October averaged 58.4 degrees Fahrenheit (14.7 Celsius), which is 1.3 degrees F. (0.7 Celsius) warmer than the 20th-century average.

But the October 2016 temperature average didn’t break any records because the month was not as warm as Octobers in 2015 or 2014. But from May 2015 to August 2016, the Earth set monthly heat records for 16 straight months. 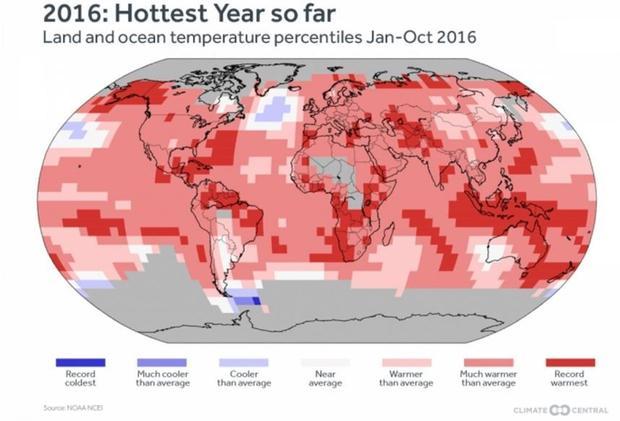 NOAA and the WMO both attribute the unusually warm temperatures in the early months of 2016 to the powerful El Nino weather event of 2015-2016 and to continuing man-made climate change from the burning of fossil fuels. While the warm temperatures fueled by El Nino are retreating, excess greenhouse gasses trapped in the atmosphere are keeping temperatures well above average. 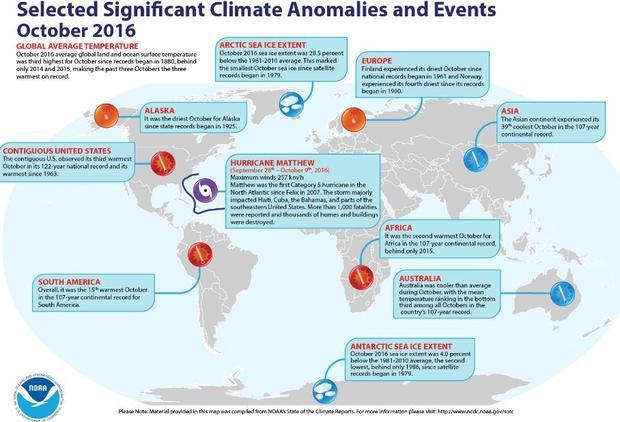 While warm to much warmer than average conditions were present across much of the globe, in Mexico and the Caribbean, parts of west-central Africa, sections of southeastern Asia, and western Alaska extending to Far East Russia, temperatures were more than 5°C (9°F) above their 1981–2010 averages.

NOAA climate scientist Jessica Blunden says there is still a possibility of a weak La Nina, the cooling flip-side of El Nino, providing us with somewhat cooler temperatures for the next couple of months. But the last three years, including 2016 will go down as the three hottest years on record “however they stack up,” Blunden said.