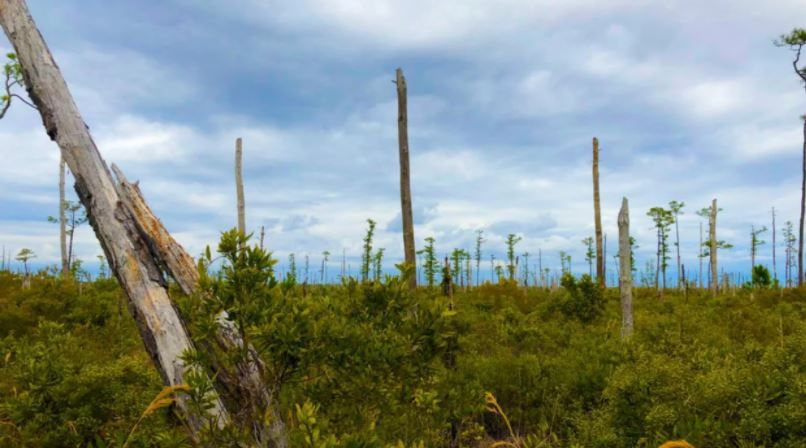 All along the Atlantic seaboard of North America, from Louisiana up to southern Canada, sea levels are rising rapidly – creating stands of dead trees – quite often bleached out and sometimes blackened – known as ghost forests.

In North Carolina, the 152,000-acre Alligator River National Wildlife Refuge has been home to endangered species and wetlands. Located in eastern North Carolina along the Atlantic Coast, the refuge was established in March 1984 to preserve and protect a unique wetland habitat type—the pocosin—and its associated wildlife species.

According to NOAA, pocosin comes from an Eastern Algonquian word meaning “swamp-on-a-hill.” These areas are usually found in broad, low-lying shallow basins along the Atlantic coastal plain of the U.S., from southern Virginia to northern Florida. Pocosins do not drain naturally and are formed by the accumulation of organic matter, resembling black muck, which builds up over thousands of years. 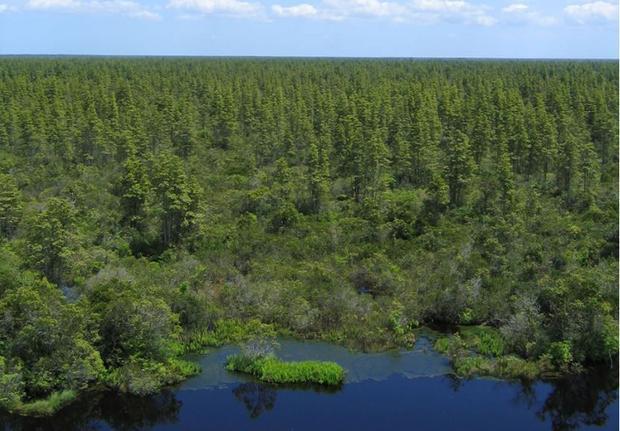 However, in a new study published in Ecological Applications on April 4, 2021, scientists at Duke University n Durham, North Carolina found that the Alligator River National Wildlife Refuge has lost 11 percent of its tree coverage since 1985 because of rising sea levels.

Emily Ury, an ecologist who studies the effects of sea-level rise on wetlands and the lead author of the study, said, “Like all living organisms, trees die. But what is happening here is not normal. Large patches of trees are dying simultaneously, and saplings aren’t growing to take their place.”

The first time Ury actually saw the damage to the forest refuge, along a stretch of U.S. Highway 64 toward the Outer Banks, sticking out of the marsh on one side of the road were not one – but hundreds of dead trees and stumps, the relic of a once-healthy forest. 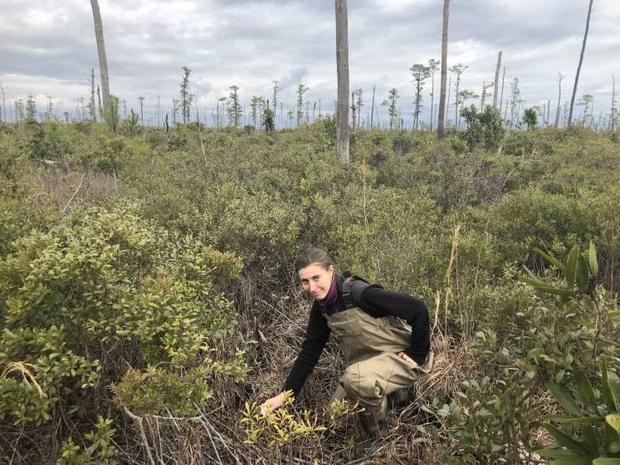 And while these “ghost forests” are becoming a more common sight in North Carolina’s coastal plain, scientists had no idea just how extensive they have become. So scientists at Duke went through 35 years of satellite images and found that between 1985 and 2019, the refuge had lost 47,000 acres of trees, roughly the equivalent of 35,000 football fields, reports The Hill.

In a statement, Ury goes on to explain that “die-offs like these are an expected effect of sea-level rise, which exposes more land to salty seawater, which literally sucks the moisture out of seeds and soil. However, it’s not just the fringe that’s getting wetter.”

The study also notes that from 1900 to 2000, the sea rose about a foot in this part of coastal North Carolina, faster than the global average. And seeing as the refuge lies less than two feet above sea level, this makes it more vulnerable to sea-level rise. 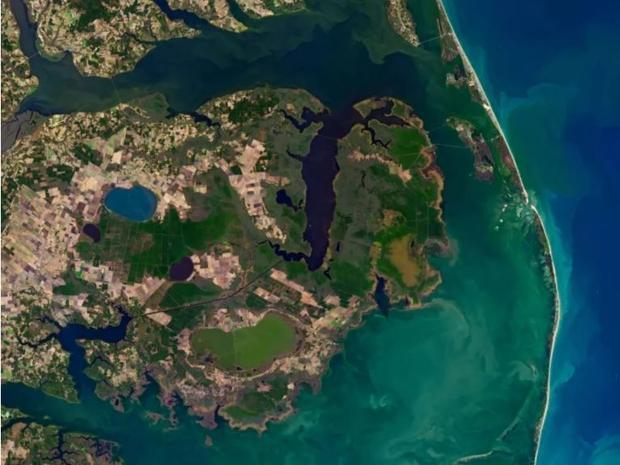 Inland-creeping saltwater is changing U.S. coastal wetlands, and now you can see the effects from space.
NASA / U.S. Geological Survey

What is happening in North Carolina is also happening in other parts of the globe. Saltwater is encroaching into areas that have never seen it before, even reducing crop yields and jeopardizing freshwater aquifers that people rely on for drinking water.

“Because of its geological location, North Carolina is just ahead of other coastal areas in terms of how far sea level rise has progressed,” Ury said. “Lessons learned here could help manage similar transitions in other places,” or pinpoint areas that are likely to be vulnerable in the future.

“If forests are dying anyway, having a salt marsh is a far better outcome than allowing a wetland to be reduced to open water,” Ury wrote. “Proactive management may prolong the lifespan of coastal wetlands, enabling them to continue storing carbon, providing habitat, enhancing water quality and protecting productive farm and forest land in coastal regions.”