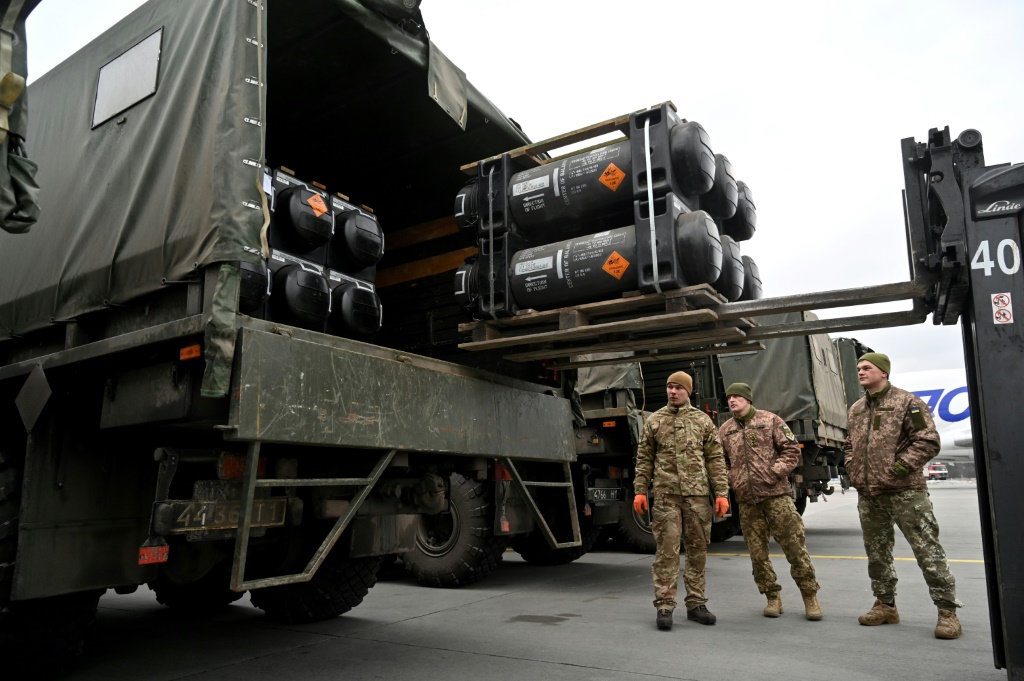 Several Western countries have provided Ukraine with military aid and weapons, since Russia invaded its neighbour on February 24.

Announced deliveries have mainly involved defensive weapons, but the situation is fast evolving.

Among the offensive weapons which are playing an important role are US-made Javelin missile launchers capable of piercing the most sophisticated armour, such as T-90 Russian tanks, and Turkish drones.

Here is a panorama of announced military aid. It is not exhaustive and some of the promised aid has still to be delivered.

US President Joe Biden announced on April 21 a new package of $800 million in military aid for Ukraine.

The Pentagon said the newest round of US support will include 72 155mm howitzers, 72 armoured vehicles to tow them, 144,000 rounds of ammunition, and more than 120 “Phoenix Ghost” tactical drones recently developed by the US Air Force specifically to address Ukraine’s needs. 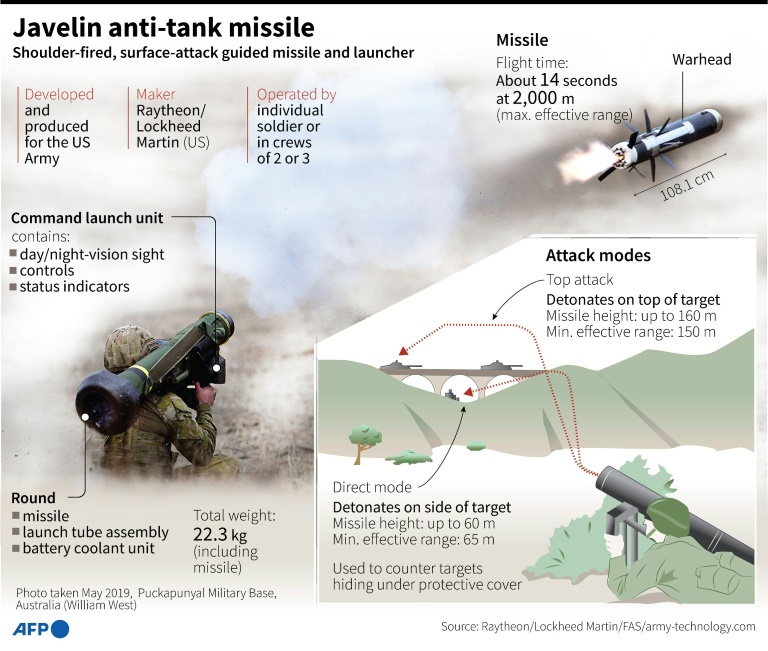 The new package follows another $800 million in military assistance announced by the White House on April 13, including helicopters, howitzers and armoured personnel carriers.

Previously the United States had supplied or promised Ukraine 1,400 Stinger anti-aircraft systems, 5,000 Javelin anti-tank missiles, several thousand rifles with ammunition and a range of other equipment.

Kyiv had before the Russian invasion around 20 Bayraktar TB2 drones, built by the Turkish military.

Kyiv also said a TB2 acted as decoy, distracting the defences of the Russian warship Moskva with a TB2, while it pounded it with missiles on the other side before sinking it last week.

Some experts say that Turkish drones continue to be delivered to Ukraine, something not confirmed by Ankara.

The UK says it has distributed more than 200,000 items so far, including 4,800 NLAW anti-tank missiles, and a small number of Javelin missiles.

It also announced it was sending 6,000 other missiles, consisting of anti-tank and high explosive weapons.

It has also sent Starstreak high velocity anti-aircraft missiles and according to reports is planning to send Stormer armoured missile launchers, on which Starstreak can be mounted.

It has also vowed to send 120 Mastiff, Wolfhound and Husky armoured vehicles and a new anti-ship missile system.

Prime Minister Boris Johnson said on April 22 the UK is considering sending tanks to Poland so that Warsaw can send its own to Ukrainian forces fighting against Russia.

Canada has since 2015 committed over $141 million Canadian dollars ($112.6 million) for defensive military equipment for Ukraine. Some  $118 million of that has come since February 2022.

Since February Ottawa has announced that it is sending defensive military aid, weapons and ammunition, hand grenades, rocket launchers, surveillance and detection equipment.

It has indicated it is preparing to send heavy artillery over the coming  days, without going into further details.

At the beginning of the conflict, Germany announced it was sending 1,000 anti-tank weapons, 500 Stinger surface-to-air missiles, around 2,700 Strela anti-aircraft missiles, and ammunition to Ukraine.

Germany also has a say in where weapons that used to belong to the former East German army end up. Berlin has approved requests from other countries (Estonia, Czech Republic) to send some of those ex-East German, Soviet-era weapons to Ukraine, including howitzers and armoured personnel carriers.

France has delivered more than 100 million euros of military equipment to Ukraine, according to Defence Minister Florence Parly.

Finland announced in February it would send 2,500 assault rifles, 150,000 rounds of ammunition, and 1,500 single use anti-tank launchers. On March 24 the country said it would send another shipment of arms to Ukraine but did not provide specifics of what that would entail.

Denmark announced on February 27 that it would send 2,700 anti-tank launchers. On April 21, Prime Minister Mette Fredriksen, while on a visit to Kyiv, announced that her country would contribute another  600 million Danish kroner ($88 million) for weapons.

Slovakia has so far contributed military material worth around 62.5 million euros and also provided an S-300 air defence system.

The EU member is also negotiating with Ukraine on the possibility of sending over Zuzana howitzers.

Latvia has contributed military material worth more than 200 million euros — including ammunition, Stinger anti-aircraft missiles and their launch pads, unmanned aircraft and drones.

Lithuania said it has sent military aid to Ukraine worth “tens of millions” of euros. This includes Stinger anti-aircraft missiles, mortars, rifles, ammunition and other military equipment.

Estonia has given 227.5 million euros of military aid,  including Javelin anti-tank missile system missiles, 122 mm howitzers, anti-tank mines and anti-tank guns, and handguns along with ammunition.

Slovenia announced in late February it was sending Kalashnikovs and ammunition.

According to German media Slovenia will send a large number of its assault tanks in return for German Marder tanks and Fuchs armoured troop carriers.

Belgium says it has sent 5,000 automatic rifles and anti tank weapons to Ukraine.

The Netherlands in late February promised the delivery of 200 Stinger missiles.

Greece has provided defensive aid, including 400 Kalashnikovs, launchers and ammunition.

Italy is keeping its arms deliveries to Ukraine under a veil of secrecy.

Japan has announced it will send electric generators and drones to Ukraine.