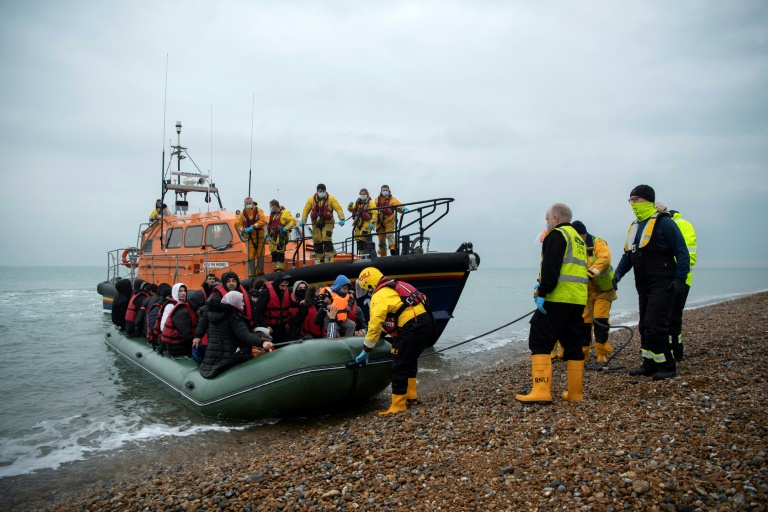 Ali sat shivering and exhausted on a pebble beach on England’s south coast but thankful for a “new life” after he and 30 other migrants were rescued in the Channel.

The Syrian asylum seeker, from the eastern city of Deir Ezzor, said he had been stranded in the sea between England and France for 12 hours on an inflatable boat before he and the others, including several children, were plucked to safety.

Ali, 22, who gave only his first name, was brought ashore on Wednesday. On the other side of the busy Channel, 27 fellow migrants were not so lucky.

Men, women and children perished in the freezing winter water when their boat capsized, in the deadliest accident in the Channel since UN migration records began in 2014.

Ali and the others could have suffered the same fate: they had to use plastic bottles to bail out water that threatened to sink their own vessel beneath the waves.

“We were scared because we didn’t know what would happen with us,” he told AFP moments after he disembarked a rescue vessel near Dungeness lifeboat station in Kent.

“We were in the middle of the sea. There were children in the boat. Of course we were worried for them, worried for everybody.”

Ali’s story is an increasingly familiar one of exploitation and desperation that has seen urgent calls for a crackdown on those trading in human misery.

Migrant crossings by boat to England have risen to record highs this year, even beyond the warmer summer months.

The British authorities have linked the increase in arrivals to the use of larger inflatable boats than in previous years.

Wednesday’s tragedy did little to deter others from attempting the same crossing.

Along the coast in Dover, more arrivals were brought in from the early morning on Thursday, and transferred to a red double-decker bus at the port, before being processed.

In Dungeness, adults and small children were given blankets to wrap themselves in. The temperature was just 5 degrees Celsius (41 degrees Fahrenheit) on land, and even colder out at sea.

Mounir Khan, from Kabul, was processed at the volunteer lifeboat station on the headland before he boarded a Border Force coach with his two teenage sons.

If they had not been rescued by the lifeboat, he said, all 30 making the perilous trip from northern France would have lost their lives.

Khan, 45, fled his homeland a little over a month ago, fearing reprisal attacks from the Taliban following the withdrawal of US-led NATO forces.

He and his brother were targets, he said, as they had worked with the Afghan military.

“The Taliban would take people in the night and kill you and nobody would (know) where you’d gone,” he added.

The crossing, passing giant tankers and car ferries in one of the world’s busiest shipping lanes, was Khan’s first time on open water.

The experience left him scared and shaken — and grateful to the lifeboat crew, when their vessel hove into view.

“There was water in the boat and the air is gone,” he said as the large punctured black dinghy he arrived on was towed up the stony beach, with water still in its stern.

“All the people would have died. They (the lifeboat crew) saved all these people’s lives.”