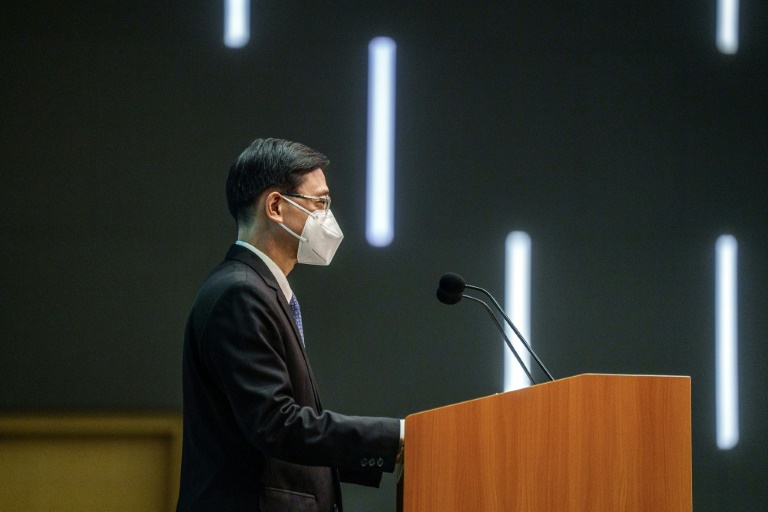 A former top cop set to become Hong Kong’s new leader vowed to reboot the city’s international competitiveness on Saturday, but revealed few concrete policy details on how that will be achieved.

John Lee, 64, is expected to be anointed the business hub’s next chief executive by a committee of Beijing loyalists next month.

A hardline former security chief, he is currently the only person to have announced a leadership bid in what Hong Kong media have widely reported will be a race with no rivals at Beijing’s request.

“Hong Kong must maintain its character of being an international metropolis,” Lee said during his first press conference since announcing his leadership bid.

“This will include ensuring Hong Kong is an attractive place to work and live.”

Whoever takes over the running of Hong Kong will inherit a city that has had its reputation battered by huge democracy protests, a crackdown on political freedoms and more than two years of strict pandemic curbs that have left residents and businesses cut off internationally.

Speaking from behind a face mask at an online press conference, Lee laid out his vision for the future under an official slogan “Starting a New Chapter for Hong Kong Together”.

But his stump speech stuck to aspirations and ideals without detailing any concrete policies or targets.

“I am a pragmatic man, and have always believed in being results-oriented,” Lee said.

“This will be a new symphony and I am the conductor.”

Lee became Hong Kong’s number two official after four decades in the security services, and oversaw the police response to the democracy protests three years ago, and its subsequent crackdown.

He is one of 12 Hong Kong and Chinese officials, including outgoing leader Carrie Lam, who were sanctioned by the United States for their role in that clampdown.

Hong Kong’s next leader will be chosen on May 8 by a committee of around 1,500 elite figures vetted for their loyalty to Beijing — roughly 0.02 percent of the city’s population.

Top Beijing loyalists in Hong Kong, as well as several billionaire property and business moguls, have thrown their weight behind Lee this week.

But the public response to Lee’s bid has been tepid, compared with the heated contest five years ago between three candidates.

Senior government loyalists have sought to play down criticism that this year’s leadership race is unlikely to field any rivals to Lee.

“Having one person run for (chief executive) does not mean we have fewer choices,” Maria Tam, a former lawmaker who sits on Beijing’s top lawmaking body, told a radio programme earlier this week.

In this article:China, Hongkong, Politics