The disease is caused by a fungus called Pseudogymnoascus destructans, that infiltrates bats’ bodies while they hibernate. While warm-blooded animals would normally be safe from a cold cave-loving fungus such as this, a bat’s body temperature drops enough during hibernation to give the fungus time to take hold.

The fungal disease doesn’t seem to hurt any other animals, according to Mother Nature News, just the bats, and it doesn’t kill them right off. Instead, once the fungus takes hold of them, they begin waking from hibernation, which burns off their fat stores. They go out searching for food, but insects are few and far between in the winter and the bats end up starving to death.

Since 2007, WNS, so named for the odd white fuzz that grows on the noses, ears and wings of infected bats, has spread to 28 eastern states and five Canadian provinces. Most of the deaths were little brown bats, Myotis lucifugus. In many areas, as much as 98 percent of the bat population has been killed.

The fungus among us
As Science Magazine is reporting, the fungus has finally crossed the Continental Divide and ended up in Washington state, 1,300 miles farther west than it has ever been seen. A sickly little brown bat was found on the trail by hikers in North Bend, Wash., at the edge of the Cascade Mountains, about 30 miles east of Seattle in mid-March.

“This is a nightmare scenario come true,” says Jeremy Coleman, an ecologist and head of the U.S. Fish and Wildlife Service’s white-nose syndrome program in Hadley, Massachusetts. “This is the news we have been bracing for and warning about going back for the last 8 years.”

Katie Gillies, imperiled-species director for Bat Conservation International (BCI) says, “Such a massive jump in geographical location leads us to believe that we humans are most likely responsible for its most recent spread.” Gillies adds that this is not only bad for little brown bats on the West Coast, but other bat populations that have so far been insulated from the disease. 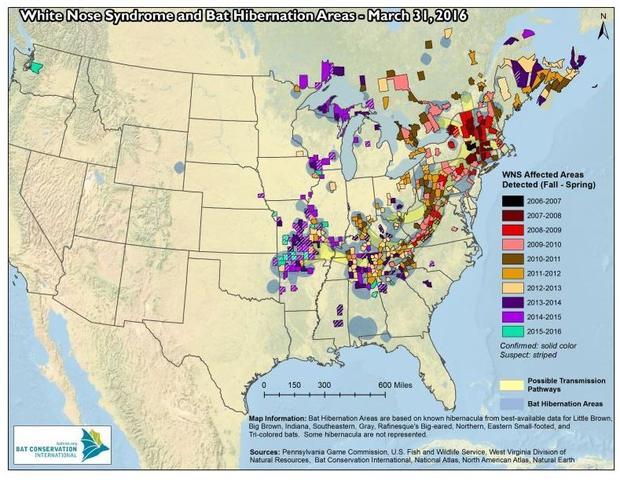 The current distribution of White-nose Syndrome.
Bat Conservation International
The impact on the environment from the loss of our bats
Gillies also says this recent turn of events is a terrible new chapter in our loss of so many bats, but the loss of any native species is bad, and not just because it is the loss of a species. For example, most people give little thought to how beneficial bats are to our environment.

Think of this for just a moment: One little brown bat can eat hundreds of mosquitoes per hour every night during the summer. And farmers may not realize this, but insect-eating bats save farmers in this country $23 billion a year just by eating crop pests.

Hope on the horizon
As was reported in Digital Journal in October 2015, researchers have discovered that bats may be developing a partial resistance to WNS. Of particular interest was a cave infected with WNS since 2008 in Vermont. For some unknown reason, the cave started showing signs of improvement in 2014.

This led researchers to believe the bats using the cave were developing an immunity, perhaps, to the fungal infection. The anti-fungal host response is still being studied. Other researchers have found a possible treatment for WNS in a common soil bacterium found in North America called Rhodococcus rhodochrous (strain DAP-96253). WNS-infected bats were treated successfully with the bacteria last year.