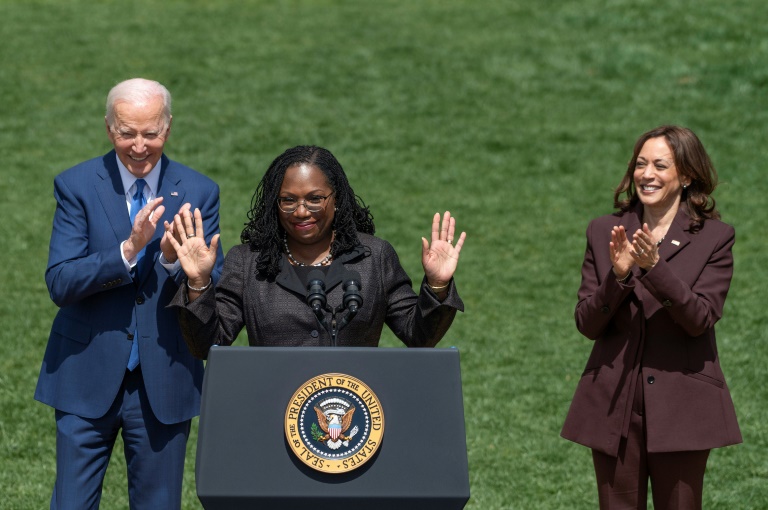 The United States made history on Thursday as Ketanji Brown Jackson was sworn in as the first Black woman to serve on the Supreme Court.

The 51-year-old’s appointment by Democratic President Joe Biden means white men are not in the majority on the nation’s highest court for the first time in 233 years.

While her confirmation is a milestone, it won’t change the 6-3 conservative majority on the court, which has come under fire for recent rulings broadening the right to bear arms and eviscerating abortion rights.

Jackson spoke only to say her oaths during Thursday’s brief ceremony.

She had picked up support from three Senate Republicans during a grueling and at times brutal confirmation process, delivering Biden a bipartisan 53-47 approval for his first Supreme Court nominee.

Jackson’s swearing-in marks a major moment for Biden, who chaired the Senate Judiciary Committee in the 1980s and 90s, meaning he has the unprecedented distinction of both naming and overseeing the appointment of a Supreme Court justice.

The appointment presents an opportunity for his administration to pivot from a spate of bad news in recent months, with Biden’s poll ratings still languishing below 40 percent amid runaway inflation ahead of midterm elections in November.

Crucially, it has allowed Biden to show the Black voters who rescued his floundering 2020 primary campaign that he can deliver for them.

At 42 days, the confirmation was among the shortest in history, although longer than it took to seat Donald Trump’s last court pick during his presidency, Amy Coney Barrett.

As the final word on all civil and criminal legal disputes, as well as guardian and interpreter of the Constitution, the Supreme Court seeks to ensure equal justice under the law.

Four of the justices on the nine-member court are now women, making it the most diverse bench in history — although they all attended the elite law schools of Harvard or Yale.

In this article:Court, Justice, Ketanji Brown Jackson, Politics, supreme, US