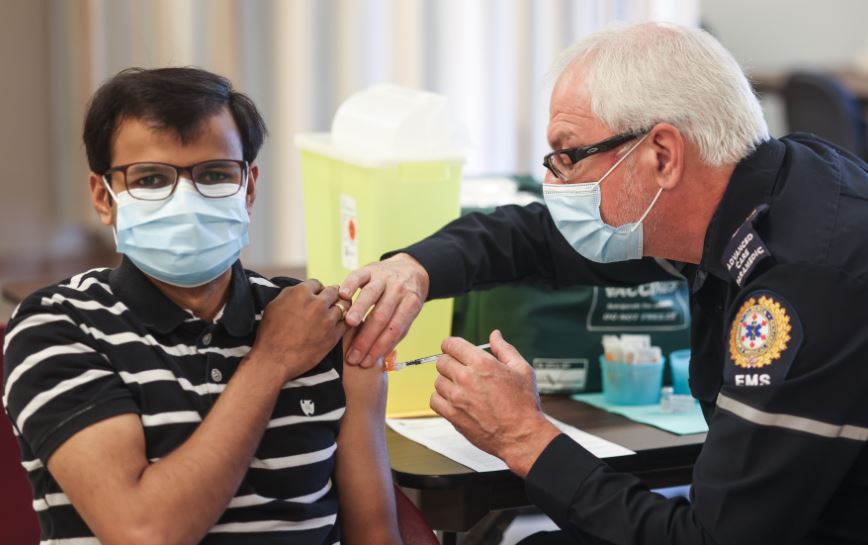 Just one day after Alberta’s Chief medical officer of health Dr. Deena Hinshaw and other provincial officials announced sweeping new health measures to fight the fourth wave of COVID-19 infections hitting the province, Alberta announced on Thursday that 1,718 new cases have been added, bringing the province’s total to 18,706, the highest since May 18.

Albertans’ got the news of the Public Health Emergency Wednesday night that outlined some new restrictions – including gathering limits and a new proof of vaccination program for non-essential businesses that was to begin Thursday, as Alberta’s health system nears collapse during a fourth wave of the pandemic.

Dr. Hinshaw also explained that the controversial limit on indoor social gatherings among the fully vaccinated to 10 people and two households is necessary. And while she went on to say that fully immunized Albertans make up a very small number of the hospitalized COVID-19 patients, the province just can’t afford to put any additional strain on its healthcare system.

Hinshaw added Albertans who use a negative COVID-19 test instead of proof-of-immunization to access businesses that implement the province’s new vaccine passport system, called the restrictions exemption program, must procure the test from the private sector, and that means you have to pay for the test.

“Alberta Health Services testing is for those with symptoms, those in outbreaks, and those who need it the most,” Hinshaw said. “Of course, instead of paying to get a negative COVID test done privately, you can get vaccinated for free. This will provide real protection, help beat down the wave, and save you the money spent on testing.”

Premier Jason Kenney’s United Conservative government has been taking flack recently for its handling of the pandemic, especially when he was warned by medical experts about the Delta variant as he celebrated his “Open For Summer” plan.

“It’s kind of sad that we’re – I wouldn’t say the laughingstock, but look how bad Alberta is doing compared to the rest of the country,” said Hughes. “It feels like everyone prioritizes business and money over people’s lives.”

Retiree Desmond Clark of Calgary said the array of measures announced Wednesday was confusing. And Alberta’s version of a vaccine passport system, which Kenney calls a “restriction exemption program,” is littered with contradictions.

Clark said he has lost any respect for Kenney’s United Conservative government. “When it comes to leadership, I’ve always been of the opinion that while I may not agree with something, I can respect the fact that something is being done,” he said.

Edmonton grandmother Sharon Morin had this to say: “We didn’t take advantage of the ‘Open For Summer.’ We stay close to home. We don’t go out to restaurants. We still mask up. So it’s really frustrating when you’re put in this position because of others,” said Morin, pointing to unvaccinated Albertans and a lack of provincial leadership.

And Alberta is not by itself in dealing with a fourth wave of the coronavirus. Caroline Colijn, a COVID-19 modeler and mathematics professor at Simon Fraser University, said while Alberta is in a tough situation, British Columbia isn’t too far behind, reports CBC Canada.

The message to B.C. is to stay vigilant and don’t do like Alberta did in waiting too long to initiate additional health mandates.