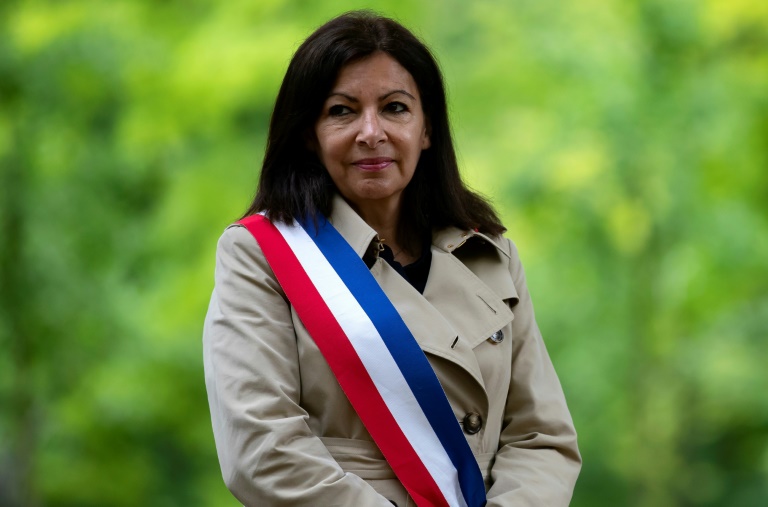 Paris Mayor Anne Hidalgo, whose political capital has withered since a failed bid for the French presidency, is facing headwinds as she battles to revamp the city ahead of the Summer Olympic Games just two years away.

Hidalgo handily won re-election in 2020 as the first woman to run the French capital, but an ill-fated attempt to unseat President Emmanuel Macron in elections last month has her opponents smelling blood.

Despite garnering international plaudits for her efforts to reduce car use, Hidalgo scored only 1.7 percent in the first round of the presidential vote — and just 2.2 percent among Paris voters.

Governing in a fractious alliance with the Greens, she has been handed a series of humiliating setbacks in recent weeks, jeopardising a promise to transform one of the world’s most popular cities that attracted some 50 million visitors a year before the coronavirus pandemic hit.

The latest blow came last week, when Paris police chief Didier Lallement opposed her plan for a pedestrian-friendly makeover for areas between the Eiffel Tower and the Trocadero esplanade across the Seine river, citing even worse traffic jams in one of Europe’s densest cities.

Lallement has the final word given the proximity of the presidential Elysee Palace, the American Embassy and scores of other sensitive official buildings.

Hidalgo has also had to accept a humiliating deal with hard-left rival Jean-Luc Melenchon, whose France Unbowed (LFI) party scored a strong third finish in the presidential race.

The pact will let just two Socialist candidates stand for the city’s 18 seats — a clear sign that Melenchon intends to cripple the Paris Socialists while refashioning the left in his image.

“With a Paris mayor who gets only 2.17 percent in her own city, it’s normal that in a left-wing alliance, LFI has the last word. The Socialists are going to have to deal with it,” Fatoumata Kone, head of the Greens faction of Paris council members, told AFP earlier this month.

The alliance came just as Hidalgo had to scrap a controversial renovation of the Eiffel Tower tourist facilities that would have seen the destruction of dozens of trees in the pristine gardens surrounding the monument, some more than 100 years old.

That plan, opposed in a petition signed by 120,000 people, dovetailed with growing anger over several projects that would see old trees cut down across the city, despite Hidalgo’s promise to plant no fewer than 170,000 new ones by the end of her term in 2026.

Opponents have targeted the construction of a new skyscraper dubbed the Triangle, a vast office complex that many local residents say will disfigure the neighbourhood.

France’s financial prosecutors office has opened a probe into suspected favouritism by City Hall in awarding the contract, Le Parisien newspaper reported Friday, reviving critics’ hopes that the skyscraper will be scrapped.

The mayor is already under fire from residents accusing her of letting the city go to seed, fuelling the #SaccageParis (Trashed Paris) hashtag that garners scores of Twitter hits every day.

The movement targets litter, damaged infrastructure and other eyesores but has gained momentum recently with the decision to let thousands of restaurants keep outdoor patios built on sidewalks and parking spaces to help them cope during the Covid pandemic.

Critics denounce the noise and odours as well as the “generalised privatisation of public space,” the Vivre Paris (Live in Paris) association wrote this week.

Hidalgo risks stoking new ire with her latest plan for tackling the scores of crack addicts who have long occupied parks and squares in the capital’s poor northeast areas.

This week her office unveiled plans to open a treatment centre for drug users in the wealthy 16th Arrondissement, a bastion of right-wing opposition to the mayor on the other side of the city.

The police chief had already refused in January to transfer addicts to another site after residents rebelled.

“I will continue to fight alongside our council members and residents so that this project never sees the light of day,” the 16th’s mayor, Francis Szpiner, wrote on Twitter.

In this article:France, hidalgo, Paris, Politics