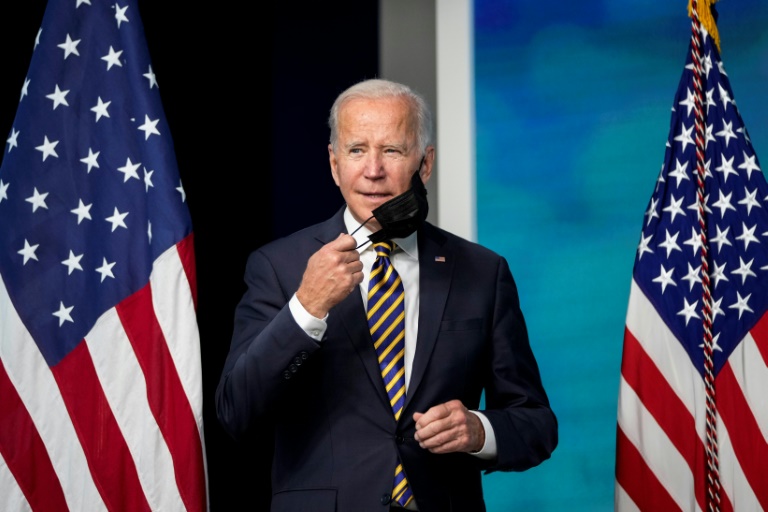 Joe Biden 1.0 was a calming, grandfatherly figure, a low-key veteran coming out of retirement in 2020 to heal a nation deeply divided by Donald Trump. A year later, meet Biden 2.0 — the frustrated, angry fighter.

“I’m tired of being quiet,” he said last week in a blistering speech.

Biden was referring specifically to his many fruitless “quiet conversations” behind the scenes with senators in a doomed effort to get his signature legislation on voting rights passed. He could just as well have been summing up the exasperation of his first 12 months in the Oval Office.

And if 2021 saw mild Biden, 2022 looks set to feature a louder, more pugnacious version — a president running out of time, patience and allies to save what remain of his ambitions.

Biden took office January 20, 2021 — at 78, the oldest man to ever become US president — facing incredible challenges.

Covid-19 was out of control, Trump’s supporters had just two weeks earlier tried overturning the presidential election, the economy was comatose, and around the world US allies were reeling in Trump shock of their own.

Biden’s answer to all that — not to mention to the explosive tensions over racism after a series of Black Americans were killed during botched arrests — was to promise competency, old-fashioned decency and unity.

“My whole soul is in this. Bringing America together, uniting our people,” Biden pledged in his inaugural address.

And he even seemed to have a chance of pulling it off.

Democrats narrowly controlled both houses of Congress, Trump had been banished from Twitter, and Covid vaccines were ready.

“There were high expectations that Biden, given his experience and his knowledge of Washington, would be able… to make the trains run on time again,” said Lara Brown, director of the Graduate School of Political Management at George Washington University.

“It was all about a return to normalcy.”

Fast forward to the start of Biden’s second year.

Beset by the Delta and Omicron Covid variants, an ever-more divided America, and the likely loss of Congress to the Republicans in November’s midterm elections, Biden’s luck at the age of 79 seems to have run short.

With a majority of just one in the Senate and barely more than that in the House, his huge social spending plan — called Build Back Better — is dead in the water. Ditto the voting rights package he says is needed to save US democracy from Trump’s supporters.

A centrist at heart, Biden has failed to connect with the right or satisfy his own party’s left. As he’s discovering, the center today is hard to find.

Average approval polls on fivethirtyeight.com are at a lowly 42 percent, down from 53. A recent Quinnipiac poll, while an outlier, posted a disturbing 33 percent approval.

Abroad, the picture is similar.

While world allies do like having a United States not governed by Trump back, the country’s humiliating military exit from Afghanistan torpedoed the Biden administration’s aura of professionalism. Certainly Russia seems unconcerned, as it masses troops on Ukraine’s border.

It all adds up to a bitter awakening from the days when the White House buzzed with idealism and talk of Biden emulating his hero Franklin Roosevelt, who led America through the Great Depression in the 1930s.

“Their optimism, combined with the public expectation that all of this would be solved, led them down a path of hubris,” Brown said.

There’s still a scenario where Biden comes out on top: the pandemic burns out, the economy stabilizes, inflation recedes, and with the subsequent feel-good factor Biden gets his party to reverse those legislative defeats just in time for the midterms.

All that with a razor-thin majority in Congress.

The more likely outcome for 2022, though, is continued Democratic infighting, followed by Republicans winning one or both chambers of Congress in November.

At that point, Biden can expect aggressive House investigations, and even possibly impeachment, as Republicans seek to further undermine their opponents’ ability to govern.

And it would become increasingly likely a 2024 White House challenge could come from Trump, even as the former president continues to try to subvert the 2020 election.

So much for Biden’s vow to restore “the soul of America.”

David Ignatius, a Washington Post columnist at the heart of the mainstream establishment, advises Biden to pivot back to “less shouting and more of Biden’s trademark common sense.”

But Biden, his back against the wall, is signaling that he sees things more darkly going into 2022.

“I did not seek this fight,” he said in another dramatic speech this month, this time commemorating the anniversary of the January 6 storming of Congress by Trump supporters.

“But I will not shrink from it either,” Biden said. “I will stand in this breach.”

In this article:Joe Biden, president Biden