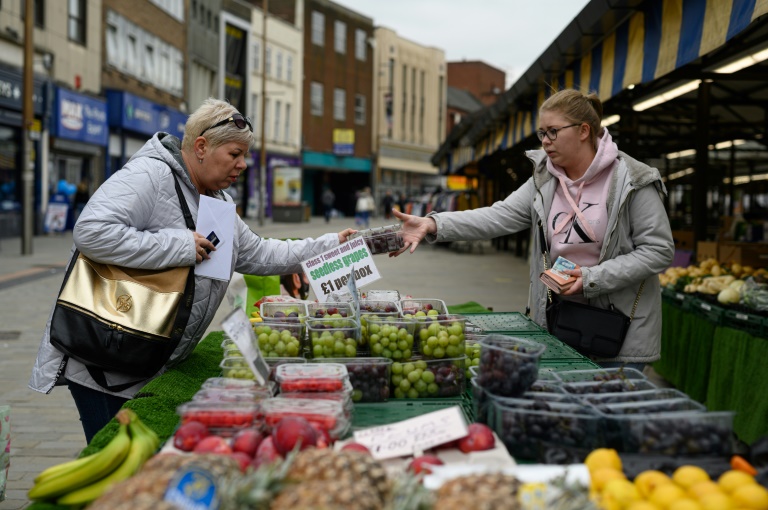 Rampant inflation and lockdown-breaking parties are fuelling anger in the English swing town of Dudley, but disillusionment with politics in general could yet help Prime Minister Boris Johnson.

“It’s lie after lie after lie,” former truck driver Alex, 73, said of Johnson, whose political survival could depend on the result of Thursday’s local polls.

“We get nothing. We live in bloody poverty, we get nothing back from all those years we’ve put into working. We worked like hell.

“You hear about how much money we pay for them to have food and wine in the Houses of Parliament and our pension’s gone up about £2. It’s an insult,” added Alex, who has to use a mobility scooter following an accident that ended his truck-driving career.

Johnson’s Conservative Party won the previously safe Labour seat in the 2019 general election, but the pandemic, the PM’s rule-breaking and the spiralling cost-of-living crisis have seen his popularity wane.

The local elections on May 5 are a test of how much support he has lost, and a wipeout could lead to his MPs trying to unseat him.

While voters in the town expressed anger at the “Partygate” revelations, they say it is rising prices that threaten to hurt the Conservatives the most.

“What’s going to get folks a lot is the cost of living, food is going up sky high, energy is going up,” retired factory worker Bob, 76, told AFP, adding he had already sent in his vote for Labour in “protest” at the government, having sat it out in 2019.

“What he (Johnson) did was bad, with ‘Partygate’, they were more or less laughing at you, but they should focus on cost of living,” he said, sat wearing a Union Jack hat and mask on a park bench in the town.

He and his friends were already having to decide between food and heating the house, with the situation only getting worse, he added.

Despite his fury at the government and Johnson’s “party of sleaze”, Bob is not sold on Labour leader Keir Starmer.

“I don’t know who’d replace him (Johnson), either party. I’d maybe vote for Starmer, but he’s got to prove something, rather than just being opposite whatever they say.”

Other former Labour voters in the town were also reluctant to return to the party, and doubted if its leader could do anything to tackle rising prices.

Starmer “hasn’t got a contingency plan that’s going to take the country forward,” said Chris Bradnick, 57, from behind his plant stall in the town market.

“There’s nothing there that I want to vote for,” he added. “Anger is a word that could be broadly applied.”

Tory supporters in the town, near Birmingham in central England, are still expecting a drubbing, with months of damaging headlines set to take their toll.

“Some people are disillusioned, they think Boris should resign. Lockdown and parties have swayed a lot of people. A lot of it’s down to anger,” said retail supervisor Jennifer Elliot, 60, who also voted Tory for the first time in 2019.

Disgruntled Tory MPs have yet to move on their leader, many citing the elections as a key factor.

But the party lacks any obvious replacement able to connect with voters in the Brexit-supporting working class communities that gave them victory in 2019.

“He’s a character, he seems like he’s one of us,” said Karl Dudley, 47, manager of the town’s indoor market.

While his supporters may be thinner on the ground, turnout could be key to Johnson’s future. Many in the town said they were disillusioned with the whole system.

All politicians were the same, Andy, 53, told AFP outside a mobility scooter shop off the high street.

“Him who’s in power now, in the pandemic when everybody couldn’t go visit people and he was having parties, get him out! And Starmer is all talk,” he said.

“They come canvassing around my house and if my son’s there with his dogs, I leave the front door open so they can go in the garden. I can’t be bothered with it. They do my head in.”