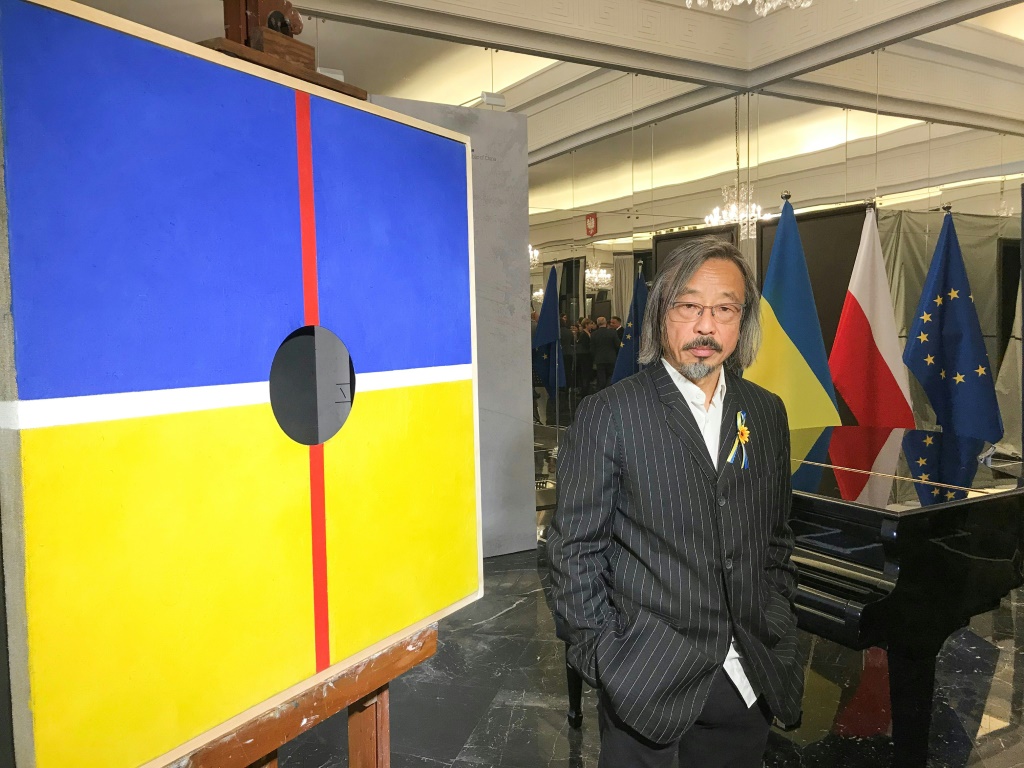 China has so far refused to condemn its ally Russia’s war, but Chinese painter Huang Rui is convinced that Ukraine has already won.

The artist told AFP he paused his other projects to dedicate himself to a work about Ukraine after hearing the news of its invasion on February 24.

“Absence of Black Moon” was finished three days later and presented at an event organised by the Ukrainian and Polish embassies in Beijing on Friday.

The event, called “Together for Peace”, was attended by multiple diplomats in a country where the authorities refuse to use the word “invasion” to describe the events in Ukraine.

Huang was one of the pioneers of the Chinese avant-garde movement in the 1980s and a member of the same loose collective as artist Ai Weiwei.

His latest work depicts the yellow and blue Ukrainian flag sliced into quarters by lines of red and white, meant to represent Russia. At the canvas’ centre is a dark circle, a reference to the “I Ching” or Book of Changes — an ancient Chinese text.

Huang said he had applied the principles of the “I Ching” to the military situation and concluded that victory for Kyiv was inevitable.

“It’s black, but in fact there’s already hope. When one sees it, they know that even at the most sombre moment, Ukraine has already won,” the artist told AFP.

“At the moment, Ukraine is in the depths of night. But it is on its own soil; it can work, think, dream.”

Many Western embassies in Beijing have displayed Ukrainian colours over the past few weeks in a gesture of solidarity.

But a poster outside the Canadian embassy with the country’s flag and a message of support on it was vandalised with anti-NATO slogans.

China has repeatedly blamed NATO’s “eastward expansion” for worsening tensions between Russia and Ukraine, echoing the Kremlin’s prime security grievance, while refusing to criticise Moscow’s decision to send troops across the border.

On Friday, Zhanna Leshchynska, charge d’affaires at the Ukrainian embassy in Beijing, was defiant.

“The Ukrainian people won’t give up. The whole nation is united in love for our country,” she said.

“Together we will win.”