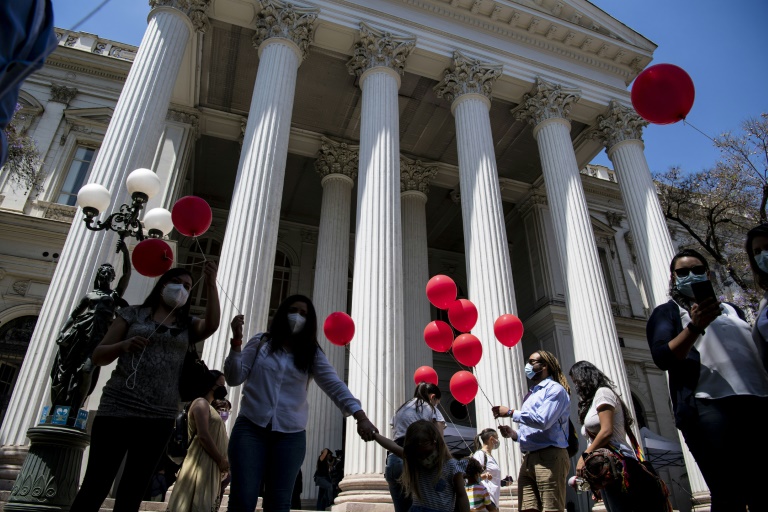 Chile, which legalized same-sex civil unions in 2015, has been awaiting this bill since 2017, when it was sent to congress by socialist then-president Michelle Bachelet.

In a surprise move, her conservative successor, Sebastian Pinera, announced in June he would seek the bill’s urgent passage through parliament.

It was given the go-ahead by the lower house, or Chamber of Deputies, earlier this month, and must now be approved by the upper house, or Senate, before finally being signed into law by Pinera.

“We want to insist that this bill should become law right now. There can no longer be excuses for continuing to drag out the discussion in congress while hundreds of families wait anxiously,” said Isabel Amor of the Fundacion Iguales LGBT rights group.

“Love does not discriminate, but the law does,” added Lorena Grez, who with other activists delivered 20,000 signatures in support of the new law.

“In Chile we are not recognized as a family,” but rather are treated as “second-class” citizens, she said.

Same-sex marriage is legal in six Latin American and Caribbean countries — Costa Rica, Ecuador, Colombia, Brazil, Uruguay and Argentina, as well as in 14 of Mexico’s 32 states.

The Senate hearing on the bill will be preceded by a decision of a constitutional commission, a step which could see the vote delayed by hours, or perhaps to another day.

The project has been consistently opposed by the most conservative bloc of Chile’s ruling right wing, but has nevertheless obtained a majority “yes” vote at every step of the process to date in an opposition-dominated congress.

On Monday, the Movilh LGBT rights group released the results of a survey in which 82.8 percent of same-sex couples, among 1,878 people interviewed, said they planned to marry once it is legal.

The issue deeply divides the two candidates headed for a presidential run-off on December 19.

Gabriel Boric, 35, who represents a leftist alliance that includes the Communist Party, supported the bill and voted “yes” in his capacity as lawmaker.

But 55-year-old, far-right candidate Jose Antonio Kast, who won 28 percent of first-round votes compared to Boric’s 26 percent, campaigned against it.