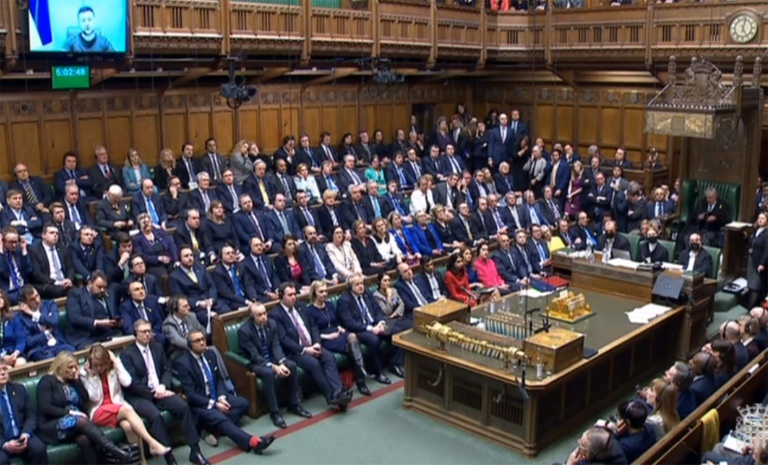 “We will not give up and we will not lose,” he said, giving a day-by-day account of Russia’s invasion that dwelt on the costs in lives of civilians including Ukrainian children.

“We will fight to the end, at sea, in the air. We will continue fighting for our land, whatever the cost.

“We will fight in the forests, in the fields, on the shores, in the streets,” he told the packed chamber, which greeted him with a standing ovation at the start and rose again at the end.

The speech was a conscious echo of Churchill’s landmark address to the House of Commons in June 1940, after British forces were forced to retreat from France in the face of a Nazi German onslaught.

Zelensky, wearing a military-green T-shirt and sitting next to Ukraine’s blue-and-yellow flag, also invoked William Shakespeare as he delivered the chamber’s first-ever virtual speech by a foreign leader.

“The question for us now is, to be or not to be,” he said in his 10-minute speech, which followed similar addresses to members of the US Congress and the European Parliament.

“Now I can give you a definitive answer: it is yes, to be.”

Zelensky, while thanking Western countries for their retaliation against Russia, also noted that NATO had failed to accede to his demands to impose a no-fly zone over Ukraine.

Appealing directly to British Prime Minister Boris Johnson, he said: “But please increase the pressure of sanctions against this country. And please recognise this country as a terrorist state.

“And please make sure that our skies are safe.

“Please make sure that you do what needs to be done and what is stipulated by the greatness of your country.”

In response, Johnson said “never before in all our centuries of parliamentary democracy has the House listened to such an address”.

“He has moved the hearts of everybody in this House,” he said, vowing that the West would press on with arms supplies to Ukraine and further sanctions, after the US and UK announced a ban on Russian oil.

But in common with other Western leaders, Johnson has warned that NATO enforcement of a no-fly zone would risk all-out war with nuclear-armed Russia.

Speeches by foreign heads of state are a rare occurrence in the “mother of all parliaments”, and standing ovations are rarer still.

The last such speech was in October 2018, when Dutch King Willem-Alexander addressed a joint sitting of the Commons and House of Lords, in person.

Zelensky’s address came after Ukraine’s ambassador in London, Vadym Prystaiko, received a minute-long standing ovation from MPs when he attended the lower chamber on March 2.

Zelensky has been in daily contact with Western leaders since Russia launched its shock invasion on February 24, eliciting public sympathy if not all he wants in terms of practical support.

On March 5, Zelensky addressed nearly 300 members of the US Congress by Zoom to plead for financial aid and the delivery of Soviet-era planes from NATO members in eastern Europe.

He addressed the European Parliament on March 1 and gave an emotional plea for Ukraine to be given “immediate” EU membership.

Then, the English translator choked up as Zelensky described how civilians had been killed in Russia’s bombardment of his cities.