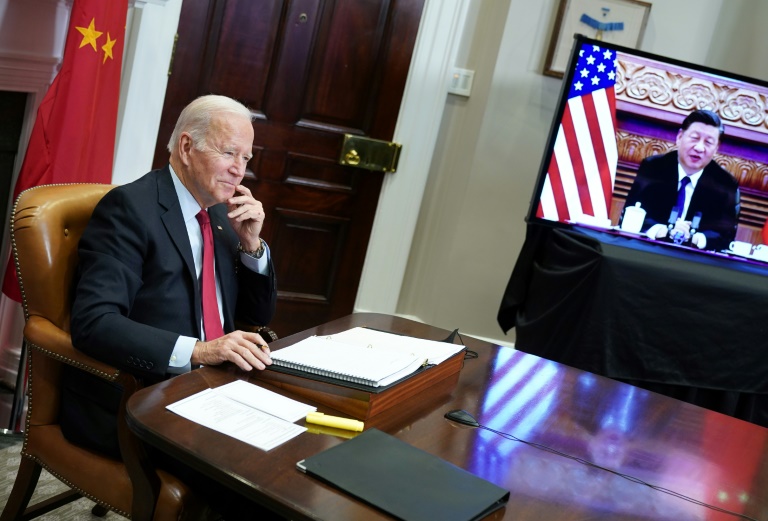 US President Joe Biden and China’s Xi Jinping traded strong warnings on the future of Taiwan at a virtual summit meant to establish “guardrails” against conflict between their rival superpowers.

The video-link summit, which took place late Monday in Washington and early Tuesday in Beijing, lasted a “longer than expected” three and a half hours, a senior US official told reporters. “The conversation was respectful and straightforward.”

While the goal was to settle an increasingly volatile relationship between the giant economic and geopolitical competitors, tension over Taiwan — a self-governing democracy claimed by China — loomed large.

Chinese state media reported after the summit that Xi cautioned Biden that encouraging Taiwanese independence would be “playing with fire.”

“Some people in the US intend to ‘use Taiwan to control China.’ This trend is very dangerous and is like playing with fire, and those who play with fire will get burned,” he was quoted as saying by Xinhua news agency.

The White House readout after the summit was considerably more measured, but between the lines, Biden’s pushback against Beijing’s increasingly aggressive posture toward Taiwan was clear.

“On Taiwan, President Biden underscored that the United States… strongly opposes unilateral efforts to change the status quo or undermine peace and stability across the Taiwan Strait,” the White House statement said.

The statement reiterated longstanding US policy that does not recognize Taiwan’s independence but supports defense of the island.

According to the US official, who asked not to be identified, there was “extended discussion of Taiwan” during the summit.

Biden also raised “concerns” over wider issues of human rights abuses and mass repression against the Uyghurs in the northwest region of Xinjiang.

The two leaders have spoken by phone twice since Biden’s inauguration in January but with Xi refusing to travel abroad because of the pandemic, an online video meeting was the only option short of an in-person summit.

The White House emphasized it did not expect — or get — any concrete changes out of the summit. Rather the goal was to build on earlier contacts with Xi to manage a relationship that is too big to fail.

Speaking from the White House to Xi on a television screen, Biden said it was their “responsibility as leaders of China and the United States to ensure that the competition between our countries does not veer into conflict, whether intended or unintended.”

“We need to establish some common sense guardrails,” he said.

Instead, the aim should be for “simple, straightforward competition,” Biden said, promising a “candid” discussion.

Xi, speaking from Beijing, called Biden “my old friend,” but said their countries had to work more closely.

“We face multiple challenges together. As the world’s two largest economies and permanent members of the UN Security Council, China and the United States need to increase communication and cooperation,” he said, speaking through an interpreter in brief public remarks, before they went behind closed doors.

Both Biden and Xi emphasized the need for working together on major global issues, especially Covid-19 and climate change.

“A sound and steady China-US relationship” is needed “for safeguarding a peaceful and stable international environment,” Xi said.

Relations between the superpowers plummeted during the presidency of Donald Trump, who launched a trade war with China while assailing Beijing’s response to an international probe into the origins of the Covid pandemic in the Chinese city of Wuhan.

Biden has recast the confrontation more broadly as a struggle between democracy and autocracy.

He got a boost Monday when he signed into law a $1.2 trillion infrastructure package, the biggest of its kind in more than half a century. Biden describes the initiative as an important step in catching up with years of intensive Chinese government investments, thereby proving that democracies can compete.

“The world is changing,” he said in a White House speech. “We have to be ready.”

While the day-to-day tone is less erratic than in the Trump era, tension over Taiwan in particular is threatening to escalate into dangerous new territory.

China has ramped up military activities near Taiwan in recent years, with a record number of warplanes intruding into the island’s air defense zone in October.

The United States says it supports Taiwan’s self-defense but is ambiguous about whether it would intervene to help directly.

In the brief comments made in front of reporters, Xi referred to each country needing to “run our domestic affairs” but did not mention US criticism of Beijing’s saber-rattling around Taiwan, mass human rights violations or other sore points.

China’s foreign ministry on Monday put the onus on Biden to improve relations.

“We hope that the US will work in the same direction as China to get along with each other,” foreign ministry spokesman Zhao Lijian told reporters.