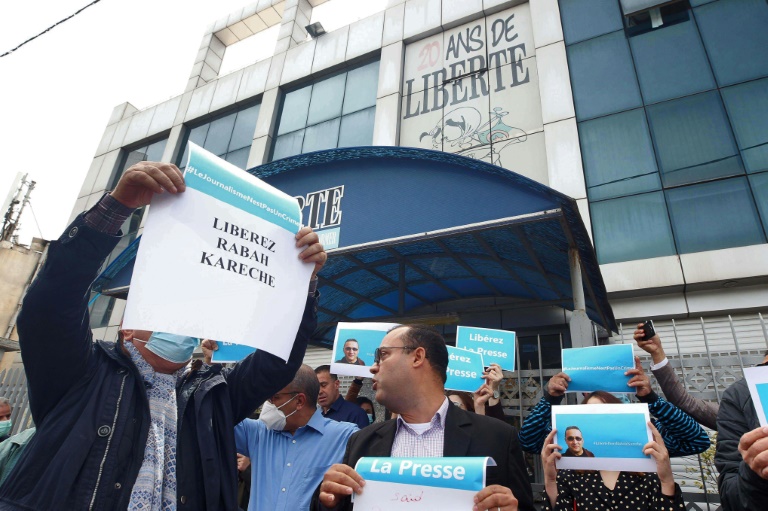 An Algerian journalist from a local French-language newspaper has been remanded in custody, accused of belonging to a terrorist organisation and spreading false information, a lawyer and rights group said.

A judge in Sidi M’hamed district of Algiers on Tuesday evening ordered Liberte journalist Mohamed Mouloudj to be placed in provisional detention, according to the National Committee for the Release of Detainees (CNLD).

The Algerian government last year criminalised the dissemination of what it considers “false news” that harms national unity.

Human Rights Watch has repeatedly accused Algerian authorities of resorting to criminal prosecutions against journalists and others using vaguely worded offences in the penal code.

Mouloudj was arrested on Sunday and his home searched, according to the Algerian League for the Defence of Human Rights (LADDH).

Six other people arrested in the same case were also remanded in custody, the CNLD said.

On Monday, police announced the arrest of 16 people suspected of belonging to the Movement for the Autonomy of Kabylie (MAK), which the government says is a terrorist organisation.

An unidentified journalist was said to be among the 16 suspects.

They were detained in connection with an investigation into recent forest fires in the northeastern Kabylie region, and the lynching of a man after rumours spread that he had started deadly blazes in the area.

Another Algerian journalist, Hassan Bouras, was arrested on September 6 and formally placed in preventive detention on Sunday, accused of “glorifying terrorism” among other charges, his lawyers said.

Algeria is ranked 146th out of 180 countries and territories on the Reporters Without Borders World Press Freedom Index.

According to the CNLD, around 200 people are in jail in connection with the Hirak pro-democracy protest movement that has shaken the North African country sporadically since 2019, or over individual freedoms.