The Stratolaunch aircraft weighs about 500,000 pounds (227,000 kilograms) and it will be powered by six 205–296 kN (46,000–66,500 lbf) thrust-range jet engines. This week the aircraft was moved out of its hangar, located at at the Mojave Air and Space Port in Mojave, California, to begin aircraft fueling tests. Shortly it will be given its maiden test flight. The aircraft looks a little odd; it is double-bodied and it boasts the largest wingspan of any aircraft in the world. The a massive carrier plane’s wingspan is longer than an entire football field.

Another strange-looking part of the aircraft are the dual fuselages, according to Space.com. Each has a different function, with the right fuselage being used by the flight crew and the left fuselage houses flight data systems. 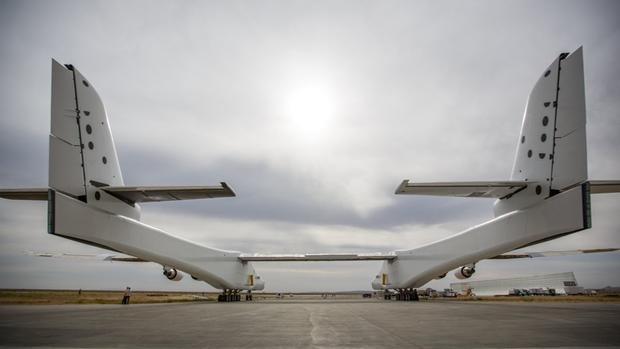 For the first time ever, the Stratolaunch aircraft moved out of the hangar to conduct aircraft fueling tests. This marks the completion of the initial aircraft construction phase and transition into the aircraft ground and flight testing phase.
Stratolaunch Systems Corp.

The aircraft is the brainchild of billionaire and Microsoft co-founder Paul Allen and it has been built by his private spaceflight company. The Stratolaunch has been designed to carry satellites into low-Earth orbit. This will be achieved by launching vehicles to a cruising altitude of 36,000 feet (11,000 meters). At this point the aircraft becomes a mobile launch pad, according to Live Science, and it will release the satellites and their launchers into orbit. On completing the task, the aircraft is designed to land back on Earth.

The reason for designing such a craft is to make the positioning of satellites into orbit easier and more accurate. Commenting on the unveiling of the giant aircraft, Stratolaunch Systems Corp. CEO Jean Floyd said in a statement: “We’re excited to announce that Stratolaunch aircraft has reached a major milestone in its journey toward providing convenient, reliable, and routine access to low-Earth orbit.”

The technologist added: “This marks the completion of the initial aircraft-construction phase and the beginning of the aircraft ground- and flight-testing phase.”

While test flights are set for later in 2017, for the first mission, in 2020, the airplane will carry a single Pegasus XL rocket built by Orbital ATK.