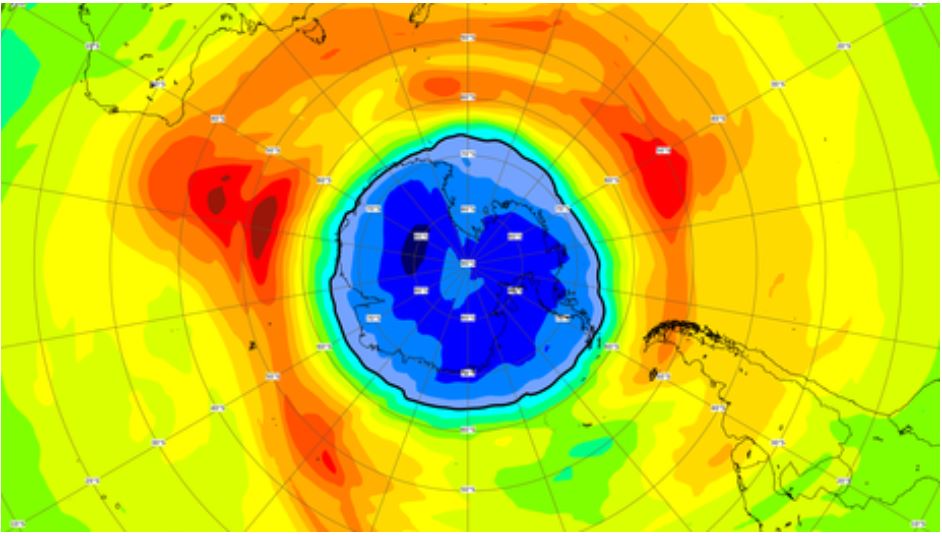 The hole in the ozone layer that develops annually is “rather larger than usual” and is currently bigger than Antarctica, say researchers from the Copernicus Atmosphere Monitoring Service, adding that this year’s hole is growing quickly and is larger than 75 percent of ozone holes at this stage in the season since 1979.

“Forecasts show that this year’s hole has evolved into a rather larger than usual one,” said Vincent-Henri Peuch, who heads the EU’s satellite monitoring service. “We are looking at a quite big and potentially also deep ozone hole,” he said, reports CTV News Canada.

Peuch also mentioned last year’s ozone hole, according to The Guardian, saying, “We cannot really say at this stage how the ozone hole will evolve. However, the hole of this year is remarkably similar to the one of 2020, which was among the deepest and the longest-lasting – it closed around Christmas.:

He added, “A large or small ozone hole in one year does not necessarily mean that the overall recovery process is not going ahead as expected, but it can signal that special attention needs to be paid and research can be directed to study the reasons behind a specific ozone hole event.”

Scientists accept that the depletion in the ozone layer is caused by human-made gases called CFCs, which were first developed in the 1930s for use in refrigeration systems and were then deployed as propellants in aerosol spray cans.

The Montreal Protocol, signed in 1987 was a multilateral environmental agreement that regulates the production and consumption of nearly 100 man-made chemicals referred to as ozone depleting substances (ODS).

Adopted on 15 September 1987, the Protocol is to date the only UN treaty ever that has been ratified by every country on Earth – all 198 UN Member States.

After the protocol was adopted,  the International Day for the Preservation of the Ozone Layer is now marked each year on 16 September to maintain awareness of the human impact on our environment. Dominating the headlines since its discovery was announced in 1985, this ‘ozone hole’ has been carefully monitored every austral spring ever since.

The Copernicus Atmosphere Monitoring Service (CAMS) collects data on both ‘good ozone’ that protects Earth from the harmful effects of ultraviolet (UV) radiation as well as ground-level ‘bad ozone’ that can cause respiratory problems. All the information CAMS provides – based on satellite and in situ observations and detailed models of the atmosphere – is therefore very important.