Researchers involved in NASA’s Innovative Advanced Concepts (NIAC) program have produced a design for a bendy, amphibious rover, which could swish about in Europa’s underground waters, like some sort of mechanical squid.

Actually, the concept isn’t entirely new, but has been developed from the success of a group of scientists in Antarctica, who sent a cylindrical robot called Deep-SCINI (Submersible Capable of under Ice Navigation and Imaging) 2,400 ft below the ice shelf, where it unexpectedly found masses of marine life.

The project to create a similar sort of submersible for space exploration is important, because a number of moons in our solar system have surfaces which are uninhabitable for life – as we know it – but could harbor life forms in their oceans and lakes, many of which lie beneath their crusts. 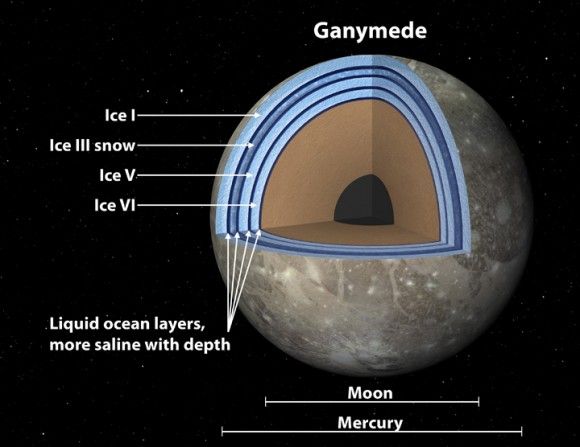 Jupiter’s moon Ganymede, the largest in the solar system, has layered ocean subsurface which may indicate it harbors life.
NASA

However, the main problem facing such a project is how to power any robot underwater without electrical connections or solar panels.

This design gets around this in an innovative way. Scientists at Cornell University are proposing that antenna on the underwater robot could derive power from Europa’s magnetic fields.

TechieNews says it would use:

“tentacle-like structures that serve both as electrodynamic tethers to harvest power from locally changing magnetic fields and as a means of bio-inspired propulsion.”

This would produce a mix of H2 and O2 gas, which would be stored inside the body and limbs of the machine. This gas would then be ignited, thus expanding its tubes and creating an eel-like swimming propulsion in its flexible body, which might also give it the ability to slither across the moon’s surface as an amphibious craft.

The Daily Mail quotes Steve Jurczyk, associate administrator for the Space Technology Mission Directorate (STMD) at NASA Headquarters in Washington, who added that this would also,

“Assess the possibility that any life on Europa may be powered by electromagnetic energy, with singular implications for astrobiology.”

In fact, things are moving pretty quick in Nasaland. Only 3 months ago, we reported on plans to create a submarine, which could plunge into the liquid methane seas of Saturn’s moon, Titan.

This new underwater squid is one of 14 other projects, which were each given $100,000 in funds for phase one of NASA’s Innovative Advanced Concepts (NIAC). Should any of these concepts prove to be viable, they could get another $500,000 for a second phase of research.

According to Engadget these concepts also include some more far-fetched ideas like;

“Robotic crawlers, hoppers and soccer-ball style buckey-bots” (wha?) that’d traipse around the forever-in-shadow areas on heavenly bodies, mapping and looking for water and nitrogen among other things. These have one of the cooler acronyms too: CRICKET — short for Cryogenic Reservoir Inventory by Cost-Effective Kinetically Enhanced Techno.”