The notable update was reportedly made this week. Microsoft has previously said it intends to more aggressively push users to upgrade to Windows 10 and the re-worded assistant for Windows 7 and 8.1 computers seems to be part of this.
InfoWorld noticed the app now has two large buttons to let users “Upgrade now” or “Upgrade tonight”. There is no obvious button to postpone installing Windows 10 for a longer period of time, or to decline the offer entirely. The only way to avoid upgrading is to close the window using its red title-bar button. 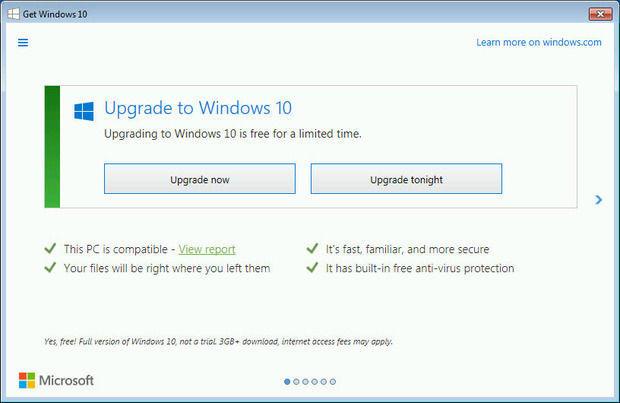 The styling of the upgrade assistant has been likened to program installers that try to automatically bundle other free software if people blindly click “Next” at every screen of options. Having two buttons to do one thing could be seen as misleading, especially when there is no equally prominent option to avoid the upgrade.
The buttons have led to claims that Microsoft is lowering itself to the levels of scammers and malware creators. Malicious software often confounds the user by forcing them to click a button without fully explaining what it does or offering a way out.
Microsoft has made other changes to Get Windows 10 recently. Brad Chacos of PC World has recorded the app’s evolution over the past few months. Chacos has noted how the window has grown from a small prompt to an intrusive, almost full-screen banner advertisement for Windows 10. Just a week ago, the “Upgrade tonight” button had a clearer label of “Start download, upgrade later.”
Get Windows 10 isn’t Microsoft’s only tactic for annoying Windows 7 and 8.1 users. It has also gained negative press for automatically downloading gigabytes of Windows 10 files even after a user declines the update and starting the upgrade process without any user intervention or evident way to cancel. The company later called the latter issue a “mistake”.
Windows 10 will remain free to consumers until July 28th 2016. Presumably, Microsoft is going to keep on pushing the operating system to users right up until that date.
Microsoft is eager to see as many people as possible using Windows 10 but users are beginning to tire of ever-more invasive advertising on their existing PCs. Although Windows 10 has been generally well received, the same can’t be said of the company’s methods of bringing people to the platform. The operating system now has well over 110 million users – Microsoft last gave an official number in October – but growth is now slowing as the majority of people who want to upgrade have done so.