Microsoft first introduced the Word Flow keyboard with Windows Phone 8.1. Its key sizing and spacing, layout options and strong predictive text support quickly made it a hit with users.
Word Flow supports gesture typing, letting you swipe quickly between keys to form words, and automatically suggests phrases above the keyboard to help you complete sentences quickly. Word Flow has previously set a world record for the fastest typing experience possible on a smartphone, although it has since been broken.
After a considerable beta testing period, Microsoft released Word Flow on iOS today. For now, it is only available in the U.S. version of the App Store. Microsoft hasn’t indicated when people in other regions will be able to try it out, describing it as an “experimental” keyboard.
The iPhone version of Word Flow includes the same gesture typing, predictive text and suggestions and evenly-spaced keys as the Windows original. It also has several features that are not available on Windows Phone or Windows 10 Mobile though. 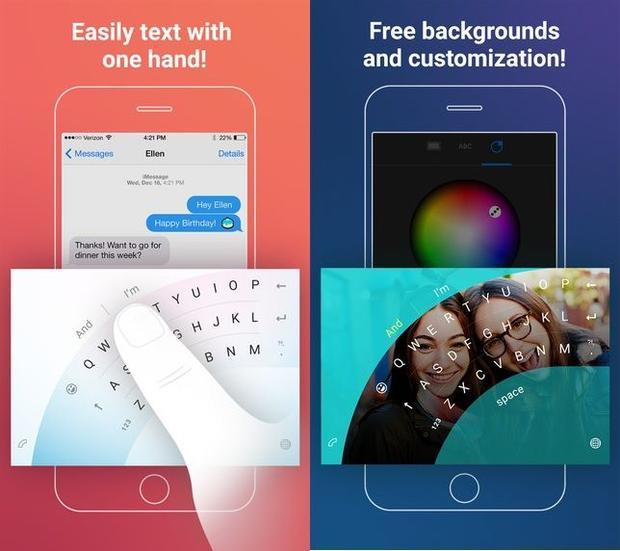 To the frustration of Windows fans, iPhone users can choose a custom background image for the keyboard from a selection of photos and texture effects. A built-in theme editor provides additional customisation settings that cannot be found in Windows 10.
There’s also a unique one-handed mode that arranges the keys in an arc-shape. It makes it simpler to use the entire keyboard while typing with only one hand. Despite appearing to be a standout feature, it isn’t available on Windows.
Bringing Word Flow to iOS represents Microsoft’s newfound emphasis on being a software company making apps for every platform. Word Flow may have started with Windows Phone but Microsoft doesn’t want it to be constrained by the limited audience of its own devices.
Back in February, Microsoft bought one of the most popular third-party keyboard apps for iOS and Android. It acquired SwiftKey for a reported $250 million, saying it will work to integrate the company’s famed predictive text technology into its own Word Flow keyboard.
The acquisition is another example of Microsoft’s desire to dominate the productivity software market. It has previously said it will share details of its plans for SwiftKey and Word Flow “in the coming months.”
U.S. iPhone users can freely download Microsoft’s Word Flow keyboard today. The company has yet to reveal an Android version and currently directs users towards SwiftKey as an alternative third-party keyboard.